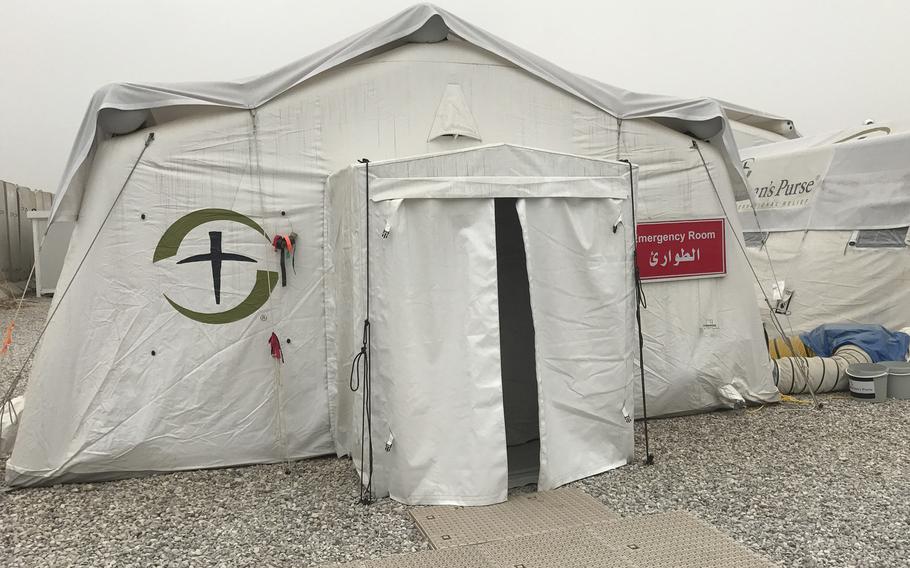 This tent on a compound east of Mosul, pictured March 13, 2017, serves as an emergency room for civilian and military casualties wounded in the battle for Iraq's second-largest city, which Islamic State militants have held since 2014. (Chad Garland/Stars and Stripes)

This tent on a compound east of Mosul, pictured March 13, 2017, serves as an emergency room for civilian and military casualties wounded in the battle for Iraq's second-largest city, which Islamic State militants have held since 2014. (Chad Garland/Stars and Stripes) 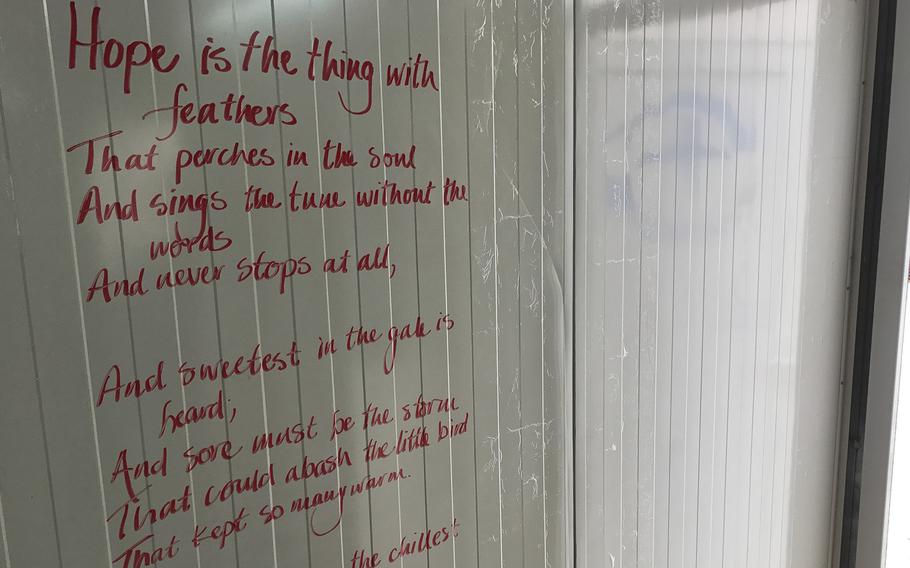 The Emily Dickinson poem ''Hope is the Thing with Feathers'' is written on the wall of the trailer that serves as a cafeteria at a Samaritan's Purse field hospital east of Mosul, where roughly 1,000 patients have been treated since the facility opened in January to treat casualties of the military campaign against the Islamic State in that city. The wall is pictured here on March 13, 2017. (Chad Garland/Stars and Stripes) 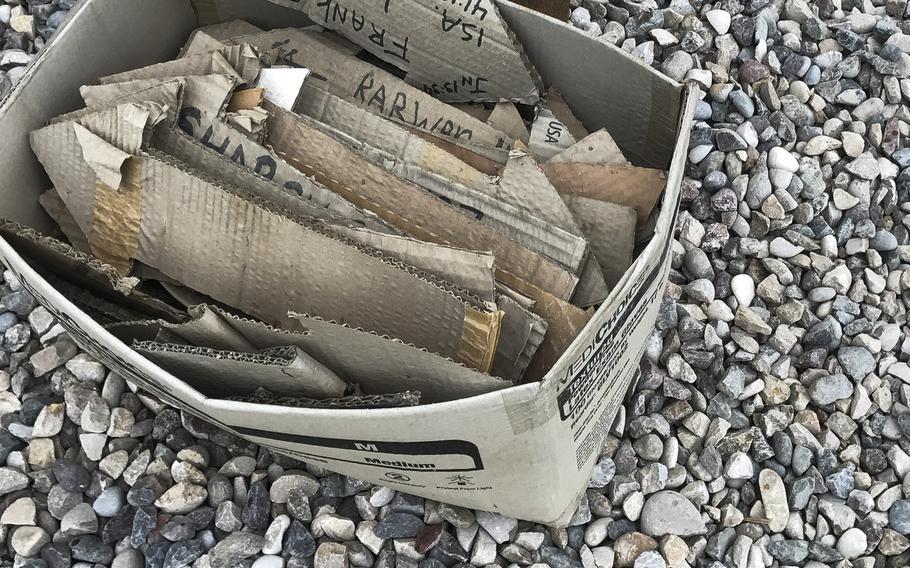 Volunteers who have served at the Samaritan's Purse field trauma hospital east of Mosul made arrows with their names, hometowns and distances from the hospital for a signpost in part of the hospital compound. A box of weather-beaten arrows is pictured here on March 13, 2017. (Chad Garland/Stars and Stripes) 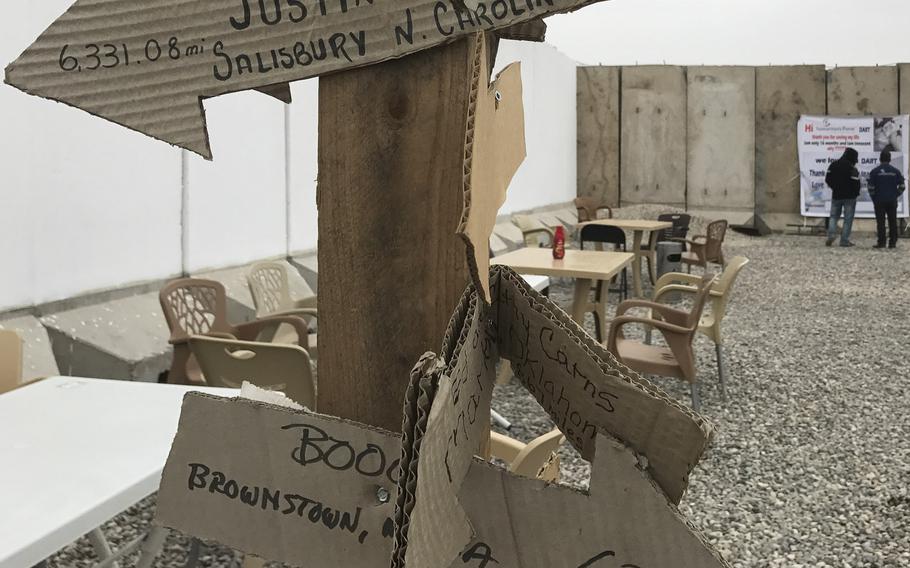 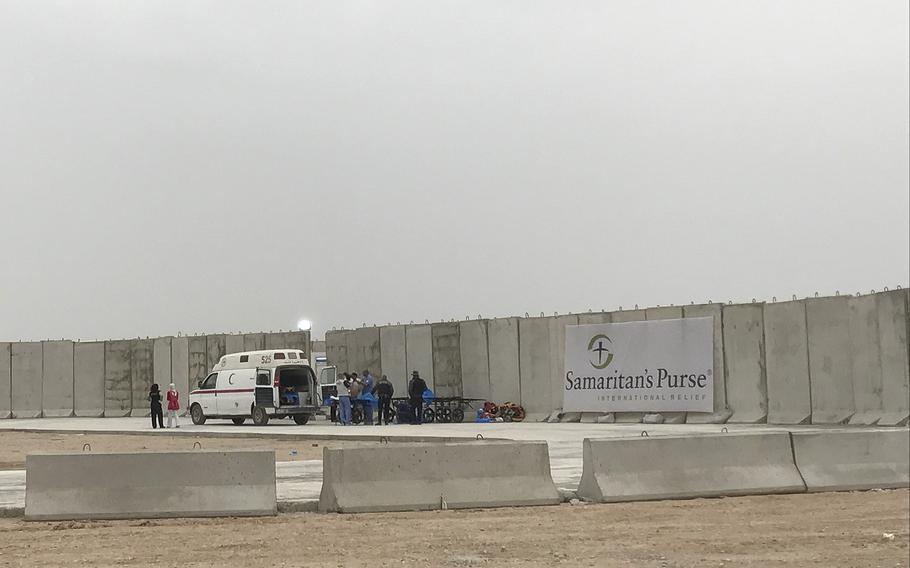 An ambulance brings the wounded to the Samaritan's Purse field hospital east of Mosul, Iraq, March 17, 2017. Officials say they've treated more than 900 people, many women in children, wounded in the offensive to retake the city from Islamic State fighters, who have held it since 2014. (Chad Garland/Stars and Stripes) 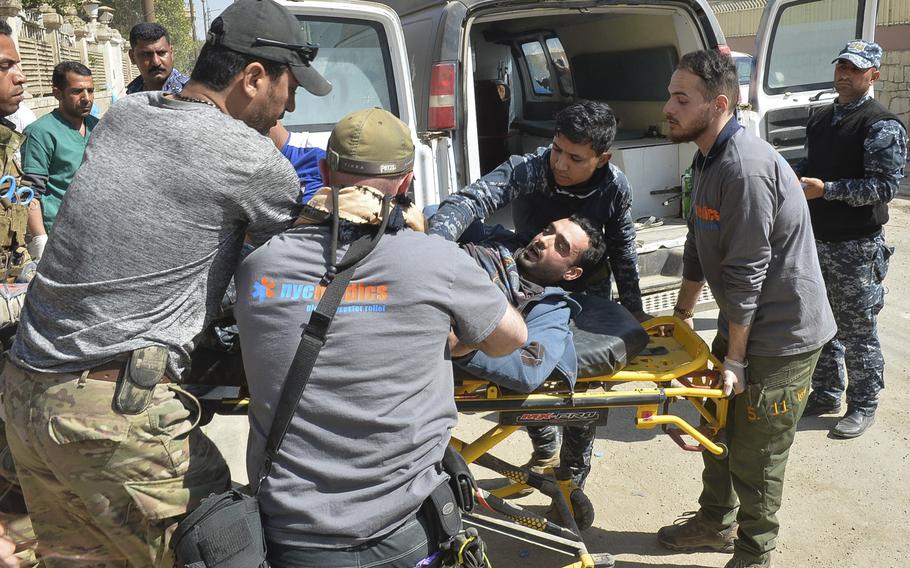 A wounded Iraqi federal police officer is carted to a medical station near the front lines of the battle for west Mosul, Iraq, March 9, 2017. Some of the attendants are volunteers with the New York-based organization NYC Medics, one of several groups partnered with the World Health Organization to help treat the casualties of the offensive in Mosul. (Chad Garland/Stars and Stripes) 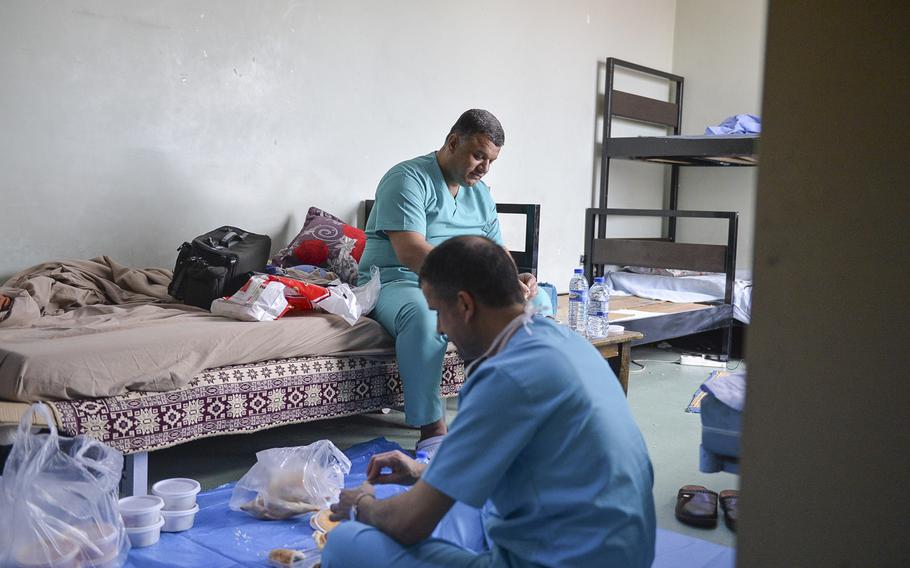 Staff of the operating room at the West Irbil Emergency Hospital in Iraq take a lunch break, March 11, 2017. New facilities and groups treating the wounded from the fight for Mosul, about 50 miles west of Irbil, are relieving some of the strain at the emergency hospital, which was built by the U.S. Army Corps of Engineers. (Chad Garland/Stars and Stripes) 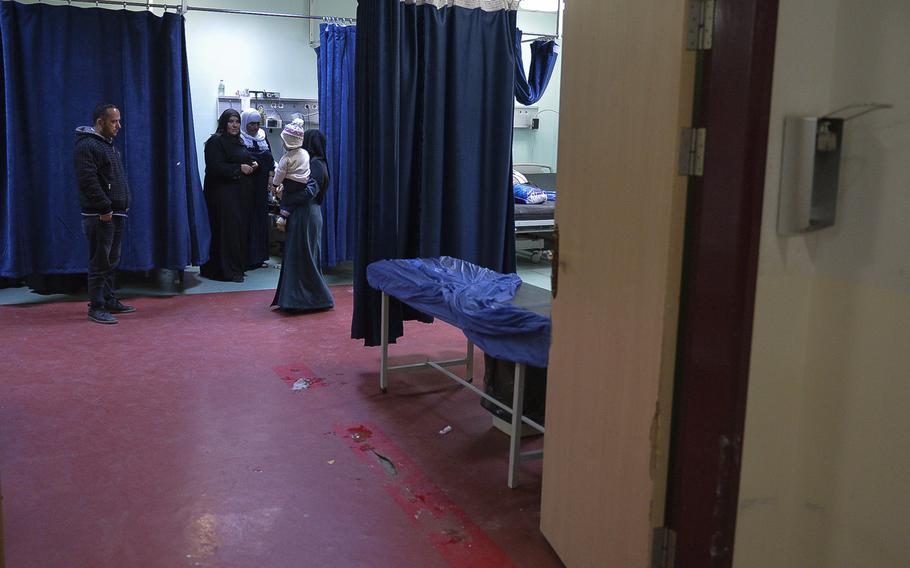 A group of family members gather in a ward for women and children at the West Irbil Emergency Hospital in Iraq, March 11, 2017. Months earlier, this ward was packed with patients on gurneys, many from the fighting in Mosul about 50 miles away, but new facilities are relieving some of the strain on the U.S.-built medical center. (Chad Garland/Stars and Stripes) 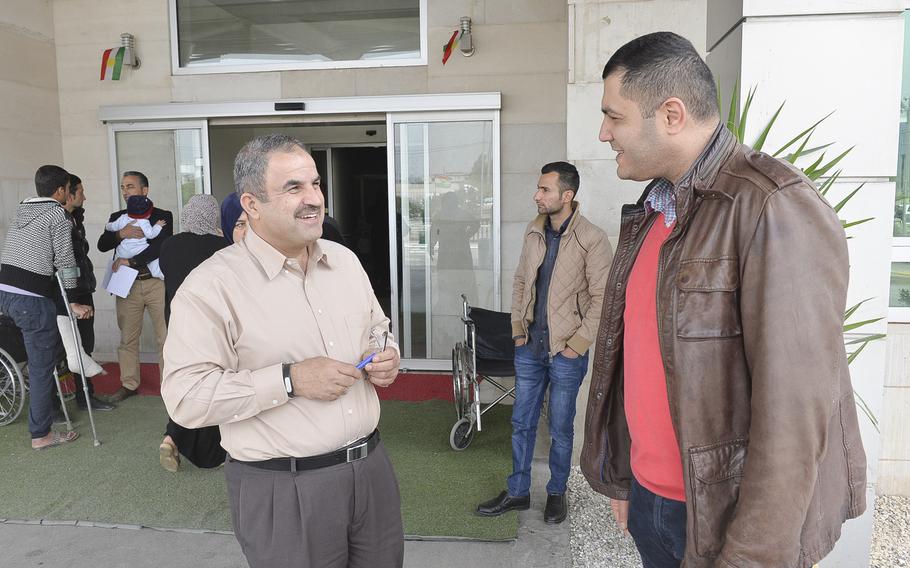 Avdal Wasman, left, a charge nurse at the West Irbil Emergency Hospital in Iraq, chats with Dr. Hazhem Mama, an orthopedic surgeon and administrator at the medical center. (Chad Garland/Stars and Stripes)

BARTELLA, Iraq — A newly opened field hospital near Mosul has relieved some of the strain on a U.S.-built medical center about 40 miles away, which was being inundated with casualties late last year.

A dozen or more wounded civilians and soldiers were arriving daily at the West Irbil Emergency Hospital in the early weeks of the campaign to oust the Islamic State from Mosul, which the group seized in 2014. The 165-bed facility in the Kurdish region’s capital was built by the U.S. Army Corps of Engineers for more than $12 million, as part of a reconstruction effort.

Its 13 operating rooms were overburdened. But last month, the new field hospital in Bartella was handling many of the wounded and sending only the most serious cases, such as those with head wounds, to Irbil, said Hazhem Mama, an orthopedic surgeon and administrator.

“This will lessen pressure (on the Irbil hospital) for the life-threatening injuries,” Mama said.

Though fighting moved to western Mosul in February, the Bartella facility — run by the U.S.-based Christian charity Samaritan’s Purse — is still one of the closest medical centers to the front lines. A similar facility south of the city, run by Geneva-based Doctors Without Borders, has also treated hundreds of civilians.

A cluster of white tents and trailers surrounded by concrete blast walls, the Samaritan’s Purse compound features an emergency room, two operating theaters, an intensive care unit, a lab, pharmacy and three wards where civilian men, women and children, and soldiers are all kept separate.

Since early January, doctors here have treated roughly 1,200 patients, said spokesman Olivia Blinn. Roughly 40 percent underwent procedures in the operating room and about one in five were critically wounded when they arrived.

“To make it from Mosul to Irbil, a lot of these people wouldn’t survive,” said Dr. Tony DeBari of Saginaw, Mich., one of six surgeons at the facility and its medical director.

They are coded “red,” one step down from those who can’t be saved and are coded “black.” With groups like New York-based NYC Medics stabilizing patients closer to the front lines, more are now arriving in code “yellow,” a serious, but less urgent condition, Blinn said.

More patients than anticipated, however, have been noncombatants, DeBari said.

“The sniper attacks are almost all women and children,” he said. He’d recently treated two boys, ages 2 and 4, for large caliber gunshot wounds to their bellies. The militants shot them as their families fled ISIS-held areas, he said.

For months, the militants have targeted fleeing civilians. U.S. officials now say they’re also locking civilians in homes and then baiting the coalition into striking those buildings in an attempt to drive up civilian casualty numbers and turn public support against the anti-Islamic State coalition.

Last month, the coalition said it probably played a role in a strike that reportedly killed more than 100 civilians who were trapped in a building ISIS snipers were occupying.

In Bartella, a 13-year-old girl had to have a leg amputated almost up to her hip after being wounded in a separate incident, when a blast went off in her home. Militants had been firing on Iraqi troops from the home, but the doctors said it was unclear whether ISIS, Iraqi ground forces or a coalition strike had caused the explosion.

The girl was fortunate Iraqi troops rushed her to the field hospital, said Dr. Paul Osteen of Houston, the hospital director. She had nearly bled to death.

“To see firsthand the horrors of war on children and mothers is ... hard to process,” Osteen said.

More than 100 people staff the facility, including some locals and dozens of volunteers from all over the United States. Rotations can last a few weeks to several months.

Sometimes the right people arrive at just the right time.

A pediatric intensive care physician, a heart surgeon and a U.S. military veteran with experience in dealing with casualties of chemical attacks each seemed to be here precisely when their skills became most vital, the directors said.

And it’s not just people. A long search had failed to turn up a local source for a particular drug recently, without which surgeries would be more dangerous and operations slower. But, right when the hospital was down to its last two doses, a fresh supply arrived.

Samaritan’s Purse is expected to run the field hospital until June, when it will be turned over to the Iraqi government. It’s part of a larger international response, led by the World Health Organization, which includes NYC Medics and others.

Those efforts are relieving some of the strain, and Mama said the International Committee of the Red Cross is helping address challenges officials at the West Irbil Emergency Hospital have had procuring supplies and keeping up staff morale, largely the result of an economic crisis brought on by low oil prices and the war with ISIS.

Help sometimes comes from unexpected sources, too. An American who came to Iraq on his own helped fulfill a “wish list” of medical supplies for Mama — mostly antibiotics.

But, some pain medications are still taking a long time to procure, Mama said. Orthopedic plates and screws are also in short supply, as are bandages.

“We’re still suffering,” Mama said. “At least we are not a front line hospital now.”