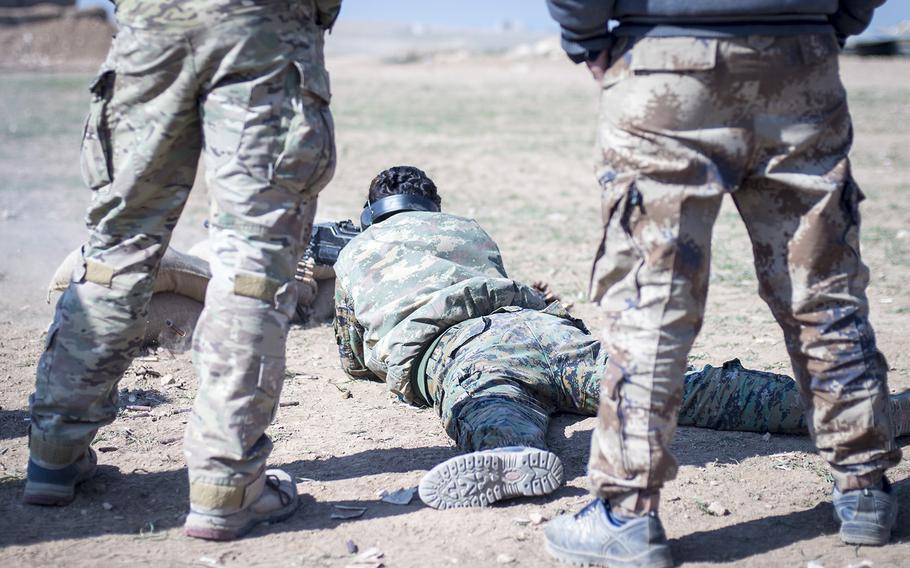 WASHINGTON — U.S.-backed Syrian fighters began pushing into the Islamic State’s self-declared capital of Raqqa on Tuesday, opening a long-anticipated battle that could put American troops closer to the front lines than in any operation in Syria so far, Pentagon officials said.

In recent weeks, the United States has increased the size of its special operations advisory force embedded with the Syrian Democratic Forces as the group prepared its invasion of Raqqa, said Eric Pahon, a Pentagon spokesman. Adding more American commandos to the fight will place them in a better position to provide real-time battlefield advice for what is certain to be the Syrian Democratic Forces’ toughest battle yet, he said.

But Pahon added the move will also help the United States curb some concerns put forth by Turkey, a NATO ally. The United States angered Turkey by supporting and by recently providing weapons to the Kurdish element of the Syrian Democratic Forces, known as the People’s Protection Unit, or YPG, which is considered a terrorist group by Turkey.

“The American advisers will closely monitor the equipment provided to the Syrian Kurds,” Pahon said. “… At the least, they’ll ensure it’s not going to be pointed in any different direction other than ISIS.”

Pahon declined to discuss how many American troops are aiding the operation. The Pentagon officially acknowledges it has about 500 troops serving in Syria, but it is believed upward of 1,000 U.S. servicemembers are operating there.

The SDF announced Tuesday via social media that it had “launched the great battle for the liberation of Raqqa,” a city of some 300,000 people controlled by ISIS for more than three years. As the SDF began moving toward the city in November, ISIS moved much of its senior leadership and administrators farther south into territory along the Euphrates River that it still controls. What remains behind, according to Pentagon estimates, are some 4,000 ISIS fighters prepared to fight to death for the city.

For the SDF, the road to Raqqa has been long and marred by brutal battles through northern Syria. But the U.S.-backed group of Syrian fighters has won every major battle against ISIS for the last two years, liberating more than 14,000 square miles from the terrorists, according to the Pentagon.

“The SDF have proven themselves the most capable force against ISIS in Syria,” said Navy Capt. Jeff Davis, another Pentagon spokesman.

The force of 55,000 troops is an umbrella group comprised of roughly half YPG fighters and a multi-ethnic force of Syrian Arabs, Christians and ethnic Turks. It is backed by U.S. and coalition warplanes as well as Marine Corps artillery and Army AH-64 Apache attack helicopters.

The Raqqa operation will be a long, difficult fight, Davis said. He compared it to the ongoing fight in Iraq, where U.S.-backed Iraqi security forces have nearly expelled ISIS from its Iraqi capital of Mosul. As of Tuesday, ISIS had been confined to less than a handful of neighborhoods in the ancient city’s most densely populated area.

Since November, the SDF has surrounded Raqqa from the north, west and east, leaving ISIS only one way to flee – by boat across the Euphrates River south of the city. Davis said ISIS militants attempting to escape Raqqa in that direction would be easy targets for coalition warplanes.

As of Tuesday, SDF fighters had entered the city’s outlying neighborhoods to the east and had moved to within 2.5 miles of the city limits in the north.

The SDF is the only force in position now to attack Raqqa, Davis said. But he did not rule out involvement from other groups aiming to dismantle ISIS.

Over the weekend, Turkey’s President Recep Tayyip Erdogan expressed displeasure with the United States’ continued support for the YPG. Erdogan vowed his own forces and Syrian rebel groups that they support would move on Raqqa.

“We will not discuss the matter with anyone,” he said. “We will make our own decision and take matters into our own hands.”

Erdogan considers the YPG an armed extension of the outlawed Kurdistan Workers’ Party, or PKK, which has waged a decades-long insurgency inside Turkey and is considered a terrorist organization by Tukey and the United States.

But the Pentagon has consistently indicated the YPG is not a threat to Turkey. Pahon said the United States vowed to its NATO partner to track all the weapons it provides the YPG and to recoup equipment – including armored vehicles – that is not expended in the ISIS fight.

“The Syrian Kurds and their Syrian Arab Coalition partners are sworn to only fight ISIS,” he said. “They’ve shown no wavering in that commitment, and they will be successful in liberating Raqqa.”