US inching toward sending arms to Ukraine 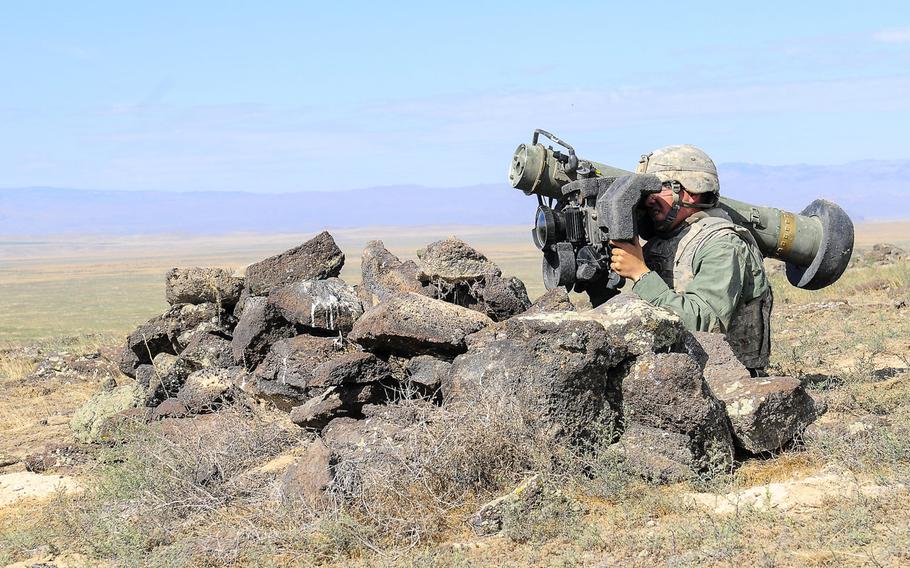 Spc. Vincent de Ruiter, a combat medic with 1st Squadron, 14th Cavalry Regiment, prepares to fire a Javelin missile launcher during a training exercise at Idaho's Orchard Combat Training Center in August 2014. As fighting persists in eastern Ukraine, pressure could grow for the U.S. to send lethal arms, such as the anti-armor Javelin system, to Ukrainian troops. (U.S. Army)

The failure of a European-brokered ceasefire to put an end to the fighting in eastern Ukraine is likely to increase pressure on President Barack Obama to send weapons to Ukraine’s government despite objections by Germany and other key European allies.

Any decision to send more sophisticated weaponry to Ukraine will require greater collaboration between the U.S. and Ukraine to ensure troops can manage those systems in the field.

What would such a move mean for U.S. troops?

“I think they have several options. They could send troops to Ukraine to have U.S. forces involved, or they could bring Ukraine’s [troops] back to the U.S. to train on those systems,” said Sim Tack, a military analyst with the Texas-based intelligence and advisory firm STRATFOR.

The amount of time and number of U.S. personnel required to conduct the training will largely depend on what type of systems would be deployed.

Another option could be bringing in contractors to carry out a portion of the training, Tack said.

While the Obama administration hasn’t specified the type of weapons being considered, key figures – including Secretary of State John Kerry and newly appointed Defense Secretary Ashton Carter – have indicated support for sending defensive arms to Ukraine.

Earlier this month, an independent report by several former administration officials called on the White House to send a range of arms to Ukraine. Among the report’s recommendations were anti-armor missiles, light armor vehicles, surveillance drones and communication systems. Those making the recommendations included Michèle Flournoy, a former top Pentagon official who was on the shortlist to replace Defense Secretary Chuck Hagel, and retired Adm. James Stavridis, former military commander of NATO and U.S. European Command.

However, German Chancellor Angela Merkel has argued forcefully against such a move, saying it would only escalate tensions and raise the stakes for Russia, which in turn could get more deeply engaged. The Obama administration needs the Germans to help maintain a solid Western front against Moscow.

What isn’t clear it whether sending defensive arms to Ukraine will undermine Western unity and drive Europe and the U.S. apart, something analysts have said is one of Putin’s chief aims.

Anti-armor missiles, such as the Javelin system, are fairly simple to operate, according to Tack.

“You can give people the short version or the long versions,” he said of the training. “You can technically teach them to use that (Javelin system) in a single training session.”

On the battlefield, such weapons would be a boost for Ukrainian forces, though the degree of effectiveness would depend on the size of the weapon delivery and how spread out it could be deployed among Ukrainian forces.

“Anti-armor missiles would give Ukrainians a much better capacity to fight weapon armor, which is something they’ve been facing heavily in the conflict recently,” Tack said.

Other systems, such as drones to track the movement of separatists, would require more detailed training and longer-lasting training support, he said. Still, there are other, more pressing, challenges than providing weapons for Ukrainian forces.

“I think an important thing to point out is a lot of these things [weapons] are not necessarily the biggest problem for Ukraine,” Tack said. “The main challenge Ukraine faces militarily is [lack of] manpower and financing.”

It also isn’t clear whether the weapons systems would in any way alter the balance on the battlefield, where the West has accused Russia of providing substantial military support ranging from tanks and advanced anti-aircraft systems to actual Russian boots on the ground.

Merkel, who along with French President Francois Hollande brokered the current ceasefire with Kiev and Moscow, acknowledged the challenges ahead after negotiating the Feb. 12 deal, saying it offered “a glimmer of hope.”

“I cannot envisage any situation in which the improved equipment of the Ukrainian army will convince (Russian President Vladimir) Putin he will lose militarily,” Merkel said during the Munich Security Conference in early February. “And that is the reality of the day.”

Others, such as U.S. Sen. John McCain, R-Ariz., a supporter of arming Ukraine, argue the weapons would raise the costs for Russia.

“Some say Ukraine cannot defeat Russia militarily. That is the wrong question. The right question is: If we help Ukrainians increase the military cost to the Russian forces that have invaded their country, how long can Putin sustain a war that he tells his people is not happening?” McCain said during the same conference.

For now, Obama has worked to remain in step with Merkel and other allies in Europe, resisting calls to send arms and remaining unified on sanctions against Moscow. That could change, however, if conditions in eastern Ukraine continue to deteriorate.

“If there is no actual truce and no actual end to violence, then I think that is a likely step for the U.S.,” Tack said.