US gunnery drill could open way for large exercises in Macedonia Mortarmen with the 2nd Infantry Brigade Combat Team fire off mortar rounds during training in Macedonia. The training will rotate groups of mortarmen through Aug 20. (Photo courtesy U.S. Army)

Mortarmen with the 2nd Infantry Brigade Combat Team fire off mortar rounds during training in Macedonia. The training will rotate groups of mortarmen through Aug 20. (Photo courtesy U.S. Army) 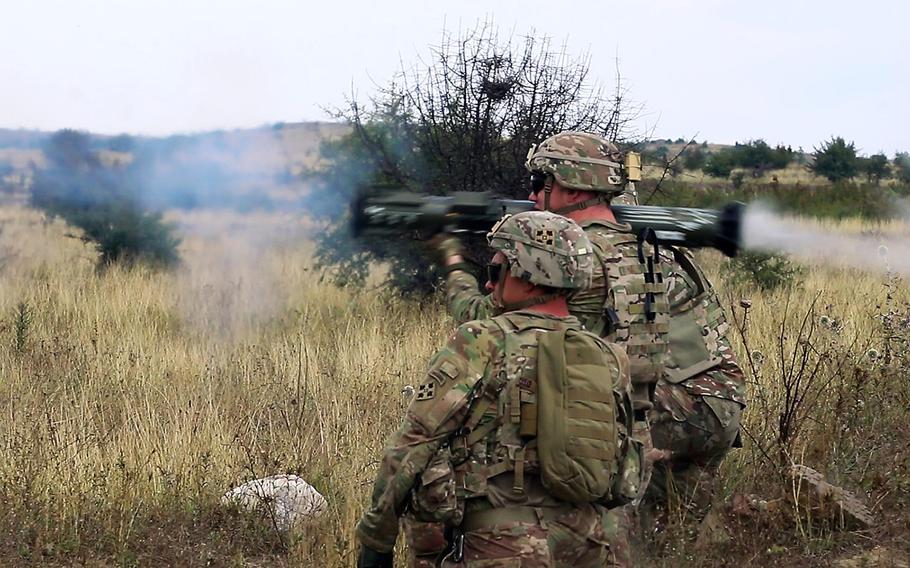 Mortarmen with the 61st Calvary Regiment fire off mortar rounds during training held in Macedonia on Aug. 2, 2018. The training will rotate groups of mortarmen through Aug. 20. (Photo courtesy U.S. Army) 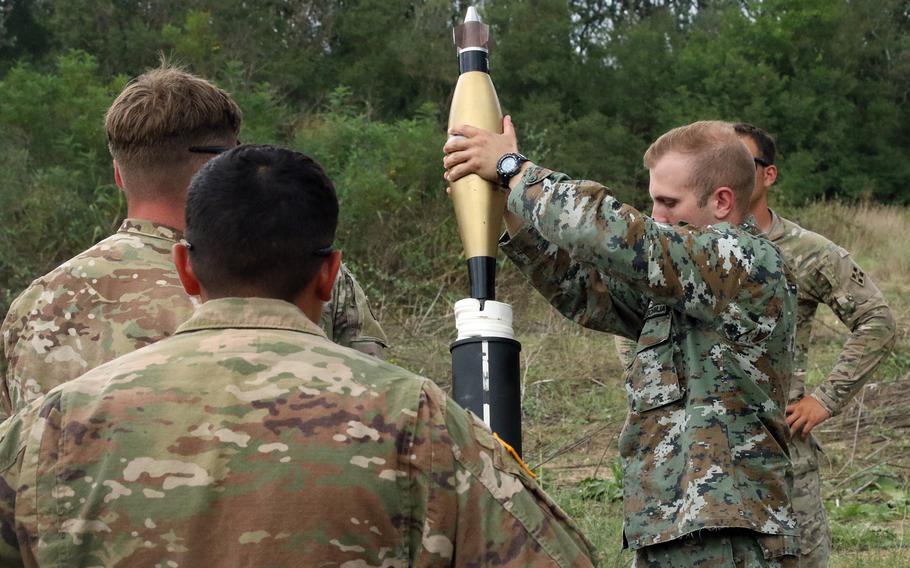 About 200 soldiers from the U.S. peacekeeping force in Kosovo are firing rifles, grenade launchers and missiles on the move for 20 days in Macedonia as a test run for much bigger exercises.

The sprawling Krivolak training area south of the Macedonian capital of Skopje is giving soldiers from 3rd Squadron, 61st Cavalry Regiment a chance to sharpen their weapon skills during maneuvers that include firing anti-tank missiles from moving Humvees.

The drills, which finish Aug. 20, aim to demonstrate that the site is suitable for larger exercises, such as one planned next year that will have about 1,000 soldiers from the U.S. and Macedonia, military officials said.

This roughly 200-square-mile site offers similar training capabilities as Grafenwoehr, Germany, but is within a three-hour drive of Kosovo, which has no place for soldiers to do weapons training at this level, officials said.

“It builds confidence, which really maximizes our lethality if we were to go against a near-peer threat,” said Lt. Col. Donald Braman, 61st Cavalry commander.

Soldiers from the Fort Carson, Colo.-based regiment are part of the 600 troops that make up the U.S. portion of NATO’s peacekeeping force in Kosovo. The nation of 2 million people declared its independence from Serbia in 2008. Serbia does not recognize Kosovo as a sovereign state and tensions between the Serbian minority and Kosovo’s ethnic Albanians remain high.

The training area’s proximity to Kosovo would permit troops to return quickly to their posts if an emergency arose, said Col. Nick Ducich, commander of the Multi-National Battle Group in charge of security in eastern Kosovo.

When the Macedonian training site is fully restored, it could accommodate a mechanized brigade of several thousand soldiers, Ducich said.

Built 70 years ago, the training site was used by the Yugoslavian military for high-caliber weapon training and aerial assault drills, making it perfect for large allied exercises, said Patrick Enriquez, deputy chief for the Office of Defense Cooperation at the U.S. Embassy in Skopje.

“The U.S. Army is always looking for places to train,” Enriquez said. “We’ve been marketing Krivolak as an alternative, if not a solution.”

Last month, NATO’s 29 heads of state formally invited Macedonia to begin talks to join the Western alliance, following a landmark deal with Greece over the former Yugoslav republic’s name. Greece, which maintains that the name Macedonia relates to a Greek region and not the country, had been blocking Macedonia’s accession to NATO and the European Union for the past two decades.

Macedonia will change its name to North Macedonia if the change passes through parliament and a voter referendum scheduled in September.