US general: Syrian Democratic Forces will lead the assault on Raqqa 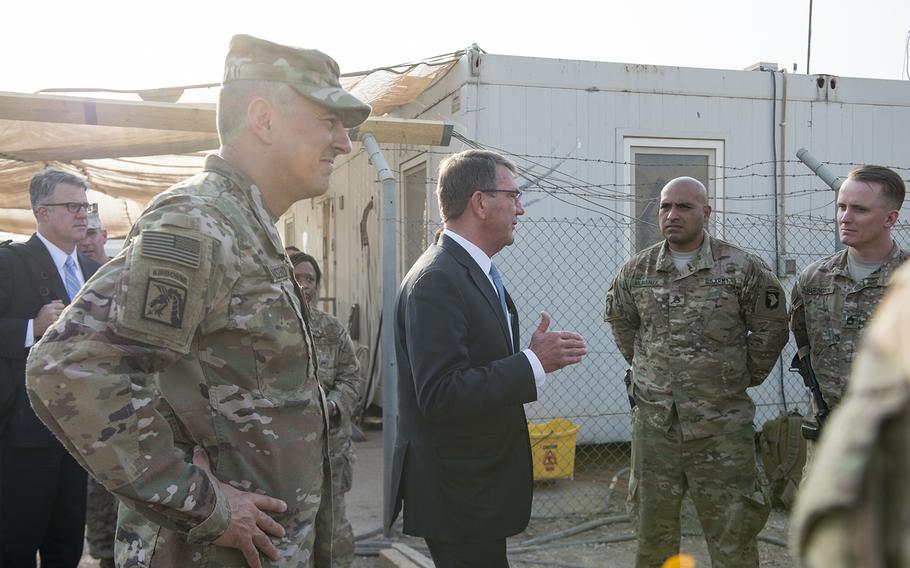 WASHINGTON — The U.S.-backed Syrian Democratic Forces will lead the impending assault on Raqqa, the Islamic State group’s stronghold in Syria, despite the objections of the Turkish government, a top U.S. general said Wednesday.

In the coming weeks, the SDF will move toward Raqqa, where its roughly 30,000 troops will work with other local forces to isolate and attack the terrorist organization in the city, said Army Lt. Gen. Stephen Townsend, the commander of the counter-Islamic State coalition. SDF commanders will plan the operation with advice from American and coalition troops.

The campaign will begin “pretty soon,” Townsend said, without providing a specific time.

The battle for Raqqa will overlap with the ongoing fight to push the Islamic State group from its final stronghold in Iraq – Mosul.

It was not clear Wednesday what role, if any, Turkey will have in the Raqqa offensive. The Turkish government has long expressed a desire to participate in the city’s liberation and has been instrumental in recently clearing the Islamic State group from a long portion of its border with Syria. But Turkey has told the United States that it will not participate if the largely Kurdish Syrian Democratic Forces are involved.

Beginning the offensive is urgent, Townsend said, based on intelligence reports that the Islamic State group is planning external terrorist attacks from Raqqa.

The general said the United States would continue to negotiate and plan with Turkey, but he was adamant that only the SDF, which in addition to the Kurdish YPG includes Syrian Arabs and other ethnic groups, is prepared to defeat the Islamic State group.

“The only force that is capable on any near-term timeline are the Syrian Democratic Forces,” Townsend told reporters Wednesday at the Pentagon during a video briefing from Baghdad. “We think there’s an imperative to get isolation in place around Raqqa.”

The SDF and the local forces that it is recruiting around Raqqa should be a force large enough to expel the Islamic State group from Raqqa, he said. Nonetheless, Townsend expects the operation in Syria will likely last longer than the assault on Mosul, which U.S. officials have said could take several months.

The general said the 10-day-old operation in Mosul has gone as planned, for the most part. More than 30,000 Iraqi security forces, Kurdish peshmerga fighters and other local units have moved within miles of the city, backed by more than 2,100 bombs, rockets and artillery rounds launched by the coalition at Islamic State group targets. Townsend said the ground forces have “a lot of momentum” as the Iraqi troops are close to entering the city where they anticipate a brutal urban battle with the roughly 5,000 militants that they believe are still there.

Townsend expects a similar defensive strategy from the Islamic State group in Raqqa. Ground troops are likely to encounter wide-spread suicide attacks and many roadside bombs on the outskirts of the city before facing the bulk of the group’s fighters at Raqqa’s center. The Pentagon did not have an estimate Wednesday of the number of militants defending Raqqa.

The ongoing civil war in Syria will complicate the Raqqa offensive and could cause the battle for the city to last longer, Townsend said. Syrian regime forces backed by Russian troops are battling opposition forces in close proximity to the coalition forces preparing to attack terrorists in Raqqa.

“All these things overlap right there, and it is extraordinarily difficult,” Townsend said.

Those complications mean the SDF, and any other potential groups involved in the fight, must plan the operation precisely.

American special operations advisers will help the SDF with the plans for the attack, Townsend said. However, he declined to specify what role they would serve in the fight.

There are about 300 U.S. special operators in Syria. The general left the door open to sending more American troops to Syria, saying he was confident he would be provided the necessary assets to defeat the Islamic State group.

“We’ll have what we need to get the job done in Raqqa,” Townsend said.