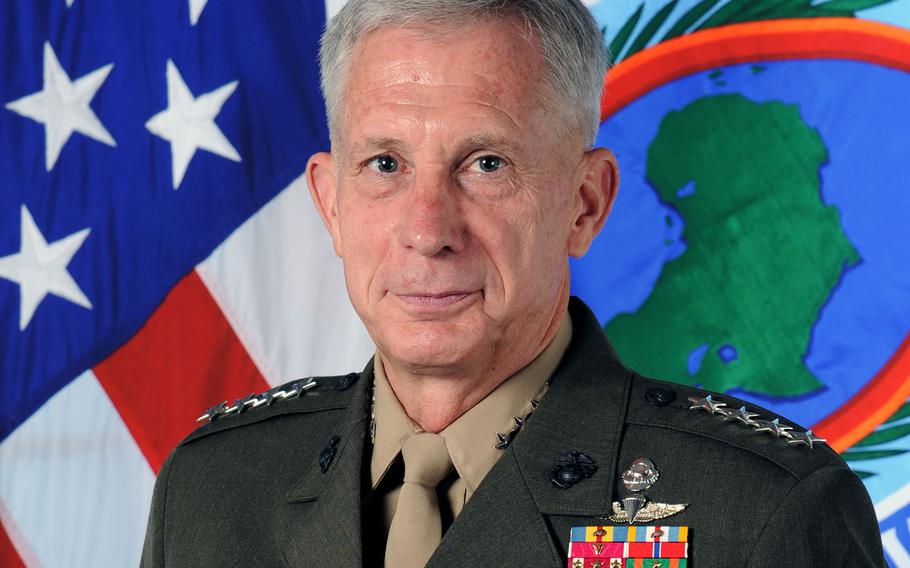 “When you get into that phase of (troops) accompanying that should tell you that the units you’re working with are at a point where the military operations they undertake become a little more complex and a little more dangerous,” Waldhauser said in an interview at his Stuttgart headquarters.

The forward presence of U.S. forces combined with a spike in airstrikes against the al-Shabab insurgent group is the most significant sign of escalation in the country since 18 American soldiers were killed there in 1993. In 2016, at least 14 strikes or raids have been carried out in the country, compared with only a handful a year earlier.

The intensification of operations raises questions about whether U.S. forces are being sucked deeper into a country that has resisted attempts by outsiders to impose order.

“AFRICOM’s attempts to mask direct combat operations against al-Shabab targets such as training camps and IED factories as advise and assist missions whitewashes the more than 10-year-old war that the Somali government, the African Union, and the United States has waged against al-Qaeda’s branch in Somalia,” wrote the Long Wars Journal in a recent analysis after a series of high profile strikes in September.

Waldhauser stopped short of calling the U.S. campaign a combat mission, emphasizing the focus was on building up the capabilities of indigenous troops. But he acknowledged the mission has become more dangerous, with U.S. troops stepping into harm’s way.

For the past several years, U.S. troops have been a quiet presence in Somalia where they have been part of an international effort to build up local forces capable of countering the al-Qaida-aligned militant group al-Shabab.

In the beginning, those efforts centered on things as basic as teaching individual troops how to drive military vehicles and aim their weapons, Waldhauser said.

“What that has transitioned to in last six months is unit level training,” he said.

Some 200 to 300 U.S. Special Operations troops work with troops from Somalia and other African nations to carry out more than a half-dozen raids per month, The New York Times reported in October, citing unnamed senior American military officials. The Navy’s SEAL Team 6 has been heavily involved in many of these operations, the paper reported.

AFRICOM’s goal in Somalia is to enable Somali forces to carry on the mission against al-Shabab when Africa Union troops potentially pullout in the coming years. The union’s mission in Somalia, known as AMISOM, involves a mix of regional militaries, including troops from Kenya and Uganda, was key to pushing Shabab out of various former strongholds.

“The goal is to train enough of these units in the next couple years so that when AMISOM leaves, the Somali national army is able to take on the disruption of al-Shabab by themselves,” Waldhauser said.

The African Union has said it expects to begin pulling out troops in 2018.

Five years ago, Shabab’s position was so strong it threatened to overrun Somalia’s capital of Mogadishu. More recently, there have been signs that Shabab has begun to reassert itself after being on the defensive, carrying out numerous high-profile strikes.

However, Waldhauser said it was difficult to assess whether the group was indeed making a comeback. He said that the holding of elections in Somalia is a sign of improved security conditions.

In June, the United States appointed its first ambassador to Somalia in 25 years, a signal that some in the U.S. see progress in a country that has dominated by assorted clans.

The West has long been concerned about Somalia’s instability. Adding to the dangers of of offshore piracy are worries that the Islamic State group could seek to make inroads here.

“It was a small, but highly symbolic, step forward for the group and demonstrates again how armed extremists exploit state disorder and local tensions to develop safe havens and rebuild after otherwise debilitating defeats,” the International Crisis Group said in a report published Thursday. The group said the Islamic State in Somalia could “grow in strength and destabilize much larger parts of Somalia.”