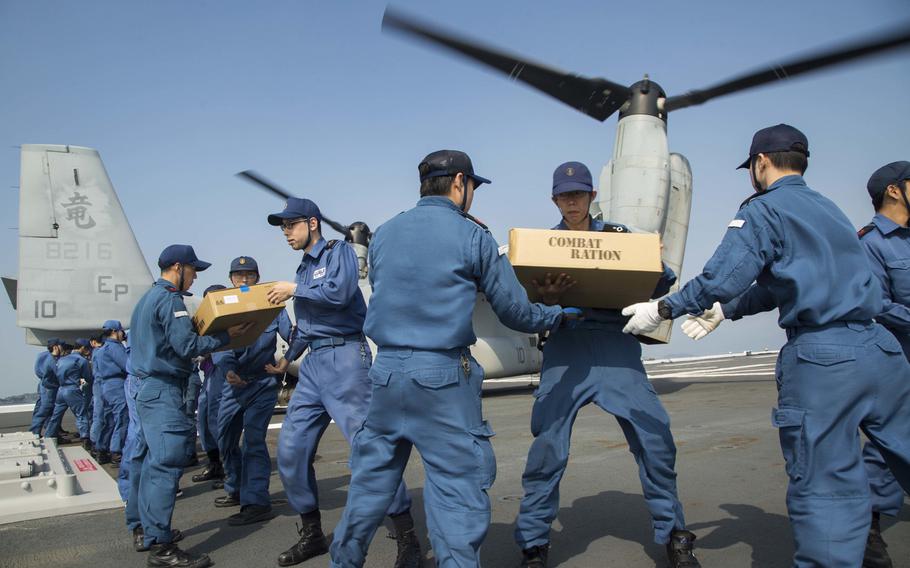 U.S. Marines assigned to the 31st Marine Expeditionary Unit and Japan Self Defense Force members transport supplies onto an MV-22B Osprey aboard the Japanese destoyer JS Hyuga, April 19, 2016. The supplies are in support of the relief effort after a series of earthquakes struck the island of Kyushu. (Samantha Villarreal/Courtesy of the U.S. Marine Corps)

YOKOHAMA, Japan — The U.S. military announced the end of its weeklong earthquake relief mission to Japan’s Kumamoto Prefecture on Sunday.

U.S. servicemembers delivered more than 230,000 pounds of supplies to Japanese personnel working in the area, which was struck by a series of intense earthquakes and aftershocks beginning April 14.

“The people affected by the quake remain in our thoughts and prayers,” U.S. Forces Japan commander Lt. Gen. John Dolan said in a statement Sunday. “I hope that our contribution to the relief effort was able to help them through this difficult time.”

Shortly after the first earthquakes, the Japanese government authorized 25,000 Japan Self-Defense Forces personnel to aid with disaster rescue and recovery.

Tens of thousands of people remain in shelters after the earthquakes left many homes uninhabitable in Kumamoto, a city and prefecture on the island of Kyushu, in Japan’s southwest.

The death toll stood at 48 dead as of Saturday, according to government figures cited by the Asahi newspaper.