US flying over Russia to take photos under Open Skies treaty 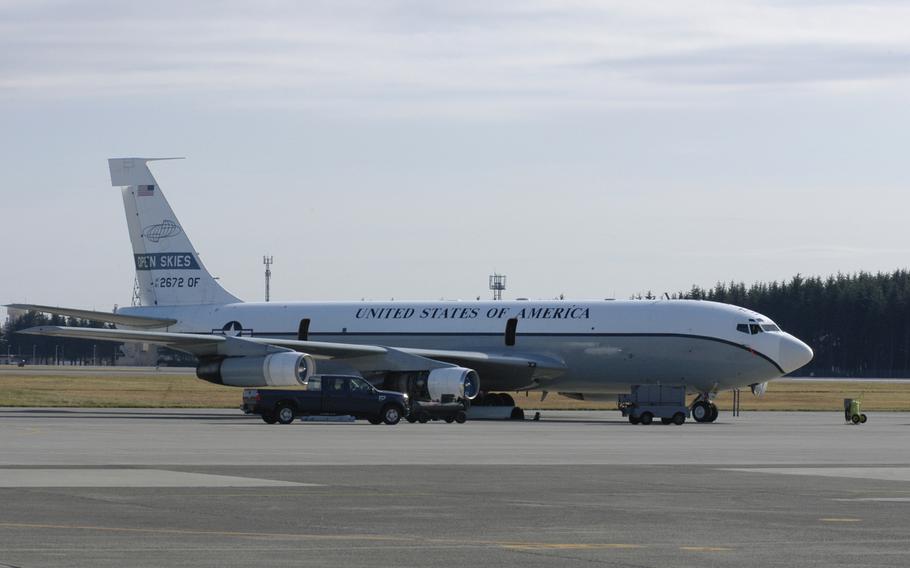 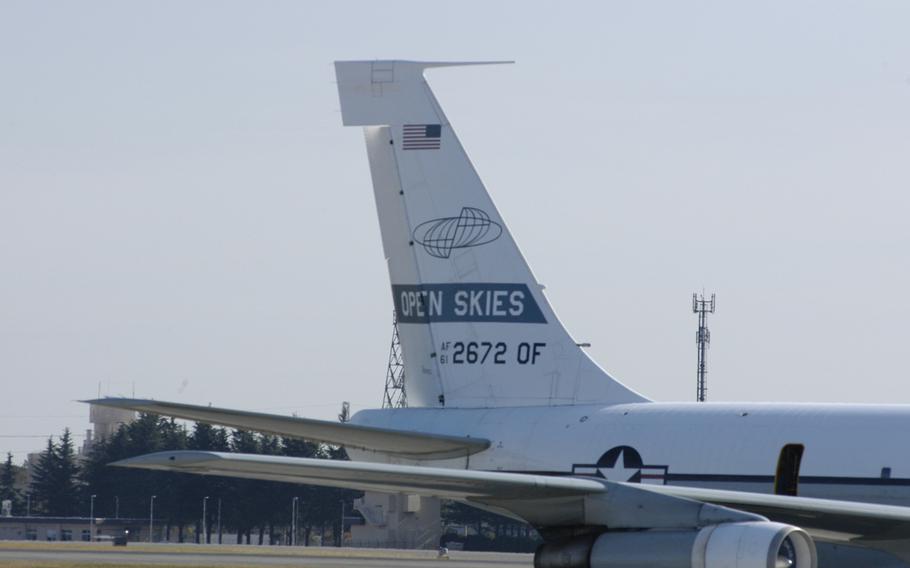 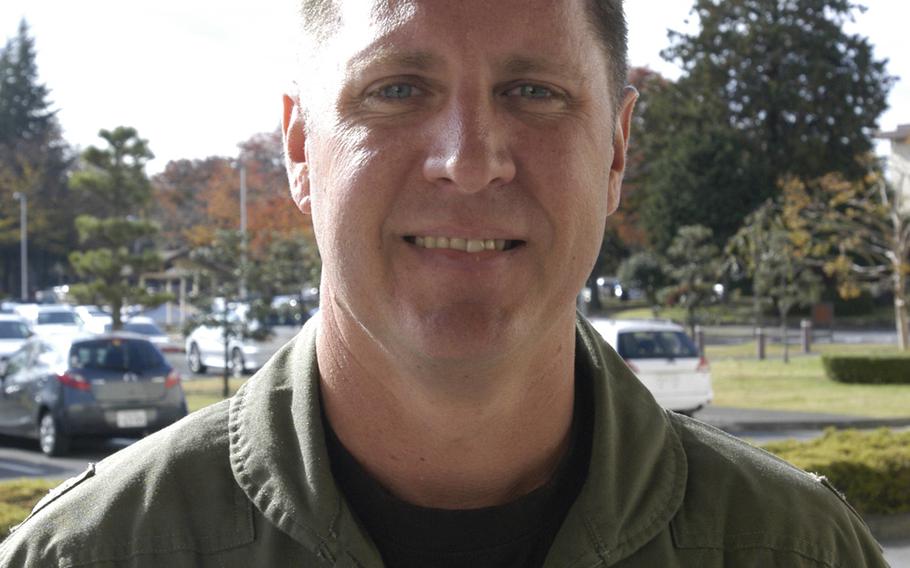 YOKOTA AIR BASE, Japan — During the past several days, a U.S. observation plane has been flying over Russian skies, taking photos of military installations and equipment — all with permission of the Russians.

The flight comes amid Russia’s increasing isolation over its military moves in Ukraine and fears of a new Cold War between Moscow and Washington.

Once upon a time, all surveillance flights were conducted covertly by the likes of Francis Gary Powers, the former Air Force pilot who spent almost two years in a Russian prison after his U-2 spy plane was downed by a Soviet missile over Sverdlovsk in 1960.

Since 2002, however, Russia, the United States and a number of other signatories to the Treaty on Open Skies have allowed a limited number of observation flights over their turf. International agreements set the number of flights, the type of surveillance equipment on board and airports that can be used.

“Most of the world has no idea this treaty even exists,” said Navy Cmdr. Chris “Half” Nelson, who is overseeing the mission over Russia this week. “Whenever I mention that Russians fly aircraft over the U.S. taking pictures, it blows people’s minds.”

President Dwight D. Eisenhower proposed the treaty in 1955 — in an era when people feared mutually assured nuclear destruction — as a means of building confidence that neither side was preparing to attack. It wasn’t signed until after the collapse of the Soviet Union in 1991 and didn’t come into force until Russia ratified it a decade later.

Nelson said Sunday that the U.S. has conducted 17 Open Skies missions so far this year, including three over Ukraine, which is also a signatory to the treaty.

Two of the Ukraine flights were conducted in March and April in response to unrest in that country, where the ouster of the pro-Russian president after months of protests was followed by Russia’s annexation of the Crimean peninsula and its backing of separatists in the Russian-speaking east.

“Based on world events, there was a certain tension (during the Ukraine flights),” Nelson said, although the turmoil below wasn’t obvious from the air.

When Malaysia Airlines Flight 17 was shot down over Ukraine in July, killing 283 passengers and 15 crew, it shocked Open Skies personnel, who conduct missions in Boeing OC-135Bs, which are similar in design to civilian passenger jets.

“Absolutely we thought about it (the risk that they might have been shot down, too),” Nelson said.

This year, the U.S. — which flies European Open Skies missions out of Royal Air Force Mildenhall in England — began flights to Siberia out of Yokota Air Base, Japan.

The Open Skies treaty specifies the equipment that observers can use. Right now, that means old-style wet-film cameras with limited resolution, Nelson said.

“They are able to identify the difference between a plane and a tank or a truck, but we can’t tell the type of aircraft or vehicle,” he said.

Aircraft are more flexible observation platforms than satellites, which move on predictable orbits and are tracked by Russia, said Carl Baker, director of programs at the Pacific Forum think tank in Hawaii.

“Now that relations have soured (between Russia and the West), there is probably interest in demonstrating that capability on both sides,” he said.

In the east, the U.S. and its allies would be interested in Russian naval assets following the deployment of Russian warships off the coast of Australia during President Vladimir Putin’s visit for the G-20 meeting during this past weekend.

“There probably is some interest in seeing if there is a serious naval build-up in Kamchatka and Vladivostok,” Baker said of the areas where Russia bases its Pacific Fleet. “It’s a spot we wanted to look at during the Cold War.”

It’s notable that Open Skies missions are still going on even as Russia cuts back its cooperation with the West in other areas.

Russia recently pulled out of a 2016 Nuclear Security Summit in response to sanctions imposed by the U.S. and its allies over Ukraine. Russia has also gradually withdrawn from the Cooperative Threat Reduction program that provides U.S. support for decommissioning nuclear, biological and chemical weapons stockpiles in the old Soviet Union, Baker said.

“The Open Skies treaty is one avenue for diplomacy that is still open,” Nelson said.

The treaty fixes points of entry for the missions headed into Russia. In the west, they must enter at Kubinka; in the east, they start at Ulan-Ude. Russian observation missions over the U.S. must start at Travis Air Force Base in California or Dulles International Airport in Virginia, Nelson said.

Once they enter Russia, the Open Skies personnel have 96 hours to complete their observation flights and another 24 hours to depart. They are allowed to fly over any part of Russia, he said.

Typically, 36 personnel are aboard, including half a dozen Russian personnel and four observers from other treaty nations. The aircraft normally flies at 30,000 feet, although it can drop as low as 10,000 feet to take photographs, Nelson said.

During a career as an F-14 Tomcat pilot, Nelson trained for aerial combat with Russian MiG fighters.

“I looked at Russia as an adversary, but now it’s a very different landscape,” he said of his work with Open Skies. “Here I am operating with my Russian counterparts in Russia, conducting observation missions for peace, security and stability.”

The Open Skies personnel get along well with their Russian counterparts, who got a tour of San Francisco during a recent observation mission in the U.S. Between flights in Russia, the U.S. personnel sample local culture and food, said Nelson, who has acquired three sets of matryoshka dolls and flown over the Kremlin and Red Square.

“For the most part, very few people get to fly over Russia, period, but for sure over Siberia and eastern Russia,” he said.

The land of the Gulag Archipelago, as seen from the air, is a vast landscape — mostly pine forests and snow-covered tundra with a northeast coast of steep, snow-covered cliffs, Nelson said.