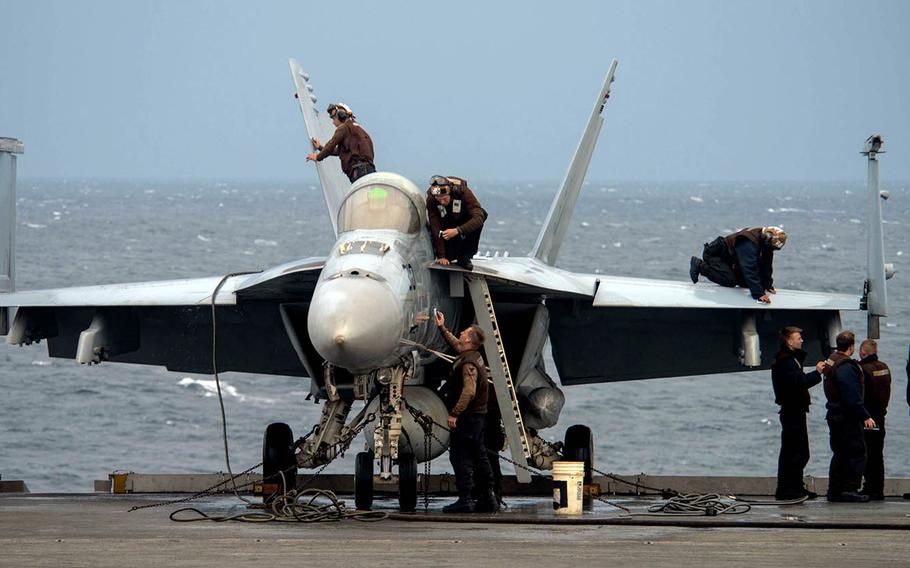 SEOUL, South Korea — U.S. fighter jets have intercepted a pair of Russian bombers that were approaching the USS Ronald Reagan in the sea between Japan and the Korean Peninsula.

The Navy F/A-18 fighters were deployed from the aircraft carrier to escort the Russian planes Sunday without incident, a Pacific Fleet spokeswoman said.

“The interaction, which occurred more than 80 miles from the ship, was deemed safe and professional,” Lt. Cmdr. Nicole Schwegman said Friday in an email.

The Russian Defense Ministry said the missile-carrying Tupolev 95MS bombers were carrying out routine flights “over international waters of the Sea of Japan and the Pacific Ocean.”

U.S. and Japanese fighter jets accompanied the planes “at certain sections of the route,” the ministry said, according to the Russian news agency Tass.

The Reagan, the USS Nimitz and the USS Theodore Roosevelt have been operating in the Navy’s 7th Fleet area of operations amid reports they will participate in a rare joint military exercise involving the three carrier strike groups sometime this month.

The exercise is expected to take place around the time that President Donald Trump is visiting the region in his first official trip to Asia, officials have said.

Tensions have spiked after North Korea test-fired two intercontinental ballistic missiles and sent two other projectiles over Japan this summer. The communist state also conducted its sixth and most powerful nuclear test on Sept. 3.