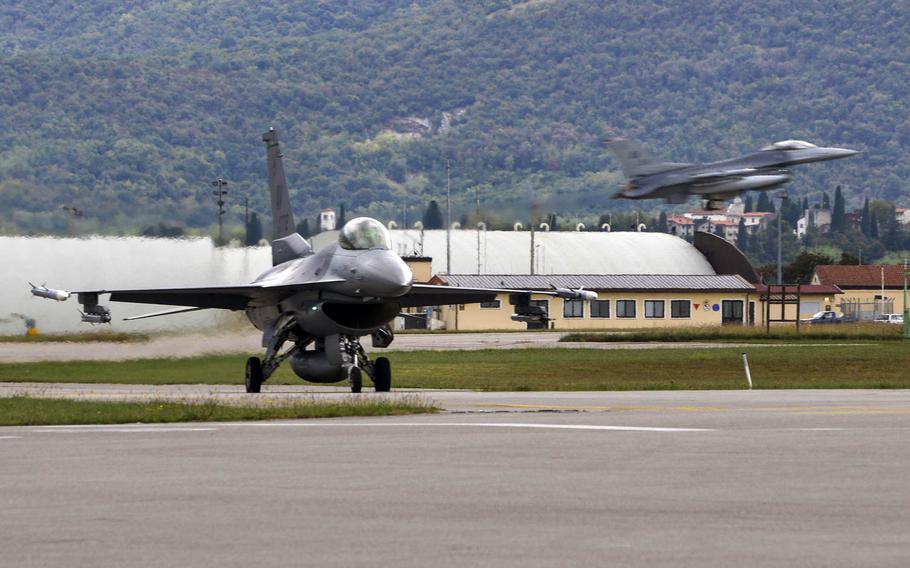 STUTTGART, Germany — U.S. Air Force F-16s and KC 135s were quietly deployed in July to the U.S. military’s counterterrorism hub in east Africa, where they remain on standby amid concerns over threats to Americans in South Sudan.

F-16s based out of Aviano Air Base in Italy and KC-135’s out of RAF Mildenhall, along with airmen in support, were deployed to Camp Lemonnier in Djibouti, U.S. Africa Command said.

The move was a “precautionary measure in order to protect Americans and American interests in South Sudan if required,” AFRICOM said in a statement.

The deployment came at the request of the State Department and embassy in the South Sudanese capital of Juba, where violent unrest posed a risk to U.S. personnel and facilities, AFRICOM said.

“These assets have remained in Djibouti out of an abundance of caution in response to that situation in South Sudan,” AFRICOM said.

In July, AFRICOM dispatched about 50 combat-equipped troops at the order of President Barack Obama to protect U.S. diplomatic personnel amid widespread violence and civil unrest in South Sudan.

The deployment was defensive in nature, officials said at the time.

On July 7, a group of U.S. diplomatic personnel were fired upon by government troops, U.S. officials have said.

“I can say that we do not believe our vehicles and personnel were specifically targeted in the attack,” Mark Toner, a State Department spokesman, told reporters at the Pentagon in September. “It’s our assessment that the attack was connected to the breakdown of command and control among South Sudanese government forces, and we have demanded that the government of South Sudan investigate this incident and punish and hold accountable those responsible for it.”

For AFRICOM, unrest in South Sudan, a country that gained independence in 2011, has been a source of recent concern.

Sudan had been roiled by violence for decades, including the most recent civil war, which stretched from 1983 to 2005.

After South Sudan gained independence, tensions continued with its neighbor to the north, but armed militia groups and tribal conflict within its own borders also posed a security risk.