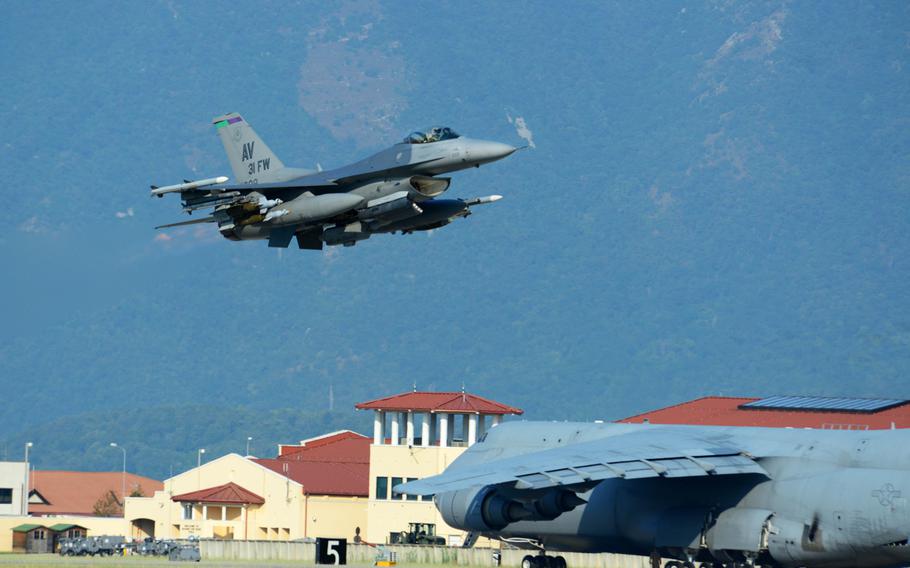 An F-16 bound for Incirlik Air Base in Turkey leaves Aviano Air Base in Italy on Sunday, Aug. 9, 2015. Six F-16 Fighting Falcons from the 31st Fighter Wing, accompanied by approximately 300 personnel and cargo, deployed to Incirlik in support of Operation Inherent Resolve. ( Deana Heitzman/U.S. Air Force)

AVIANO AIR BASE, Italy — A half dozen F-16s and about 300 airmen from the 31st Fighter Wing have deployed to Incirlik Air Base in Turkey where they’re expected to conduct airstrikes against Islamic State targets in Syria and Iraq.

The jets could be seen departing Aviano Air Base early Sunday. A news release issued later in the day said the jets had arrived at Turkey's southern air base.

The brief statement said that six F-16s from Aviano and the airmen would be supporting Operation Inherent Resolve. “This follows Turkey’s decision to host the deployment of U.S. aircraft conducting counter-ISIL operations,” it said.

There are no U.S. aircraft permanently stationed at Incirlik, one of the smallest U.S. Air Forces in Europe installations in terms of personnel. But Air Force cargo and refueling planes have called the base a temporary home for years, supporting an array of operations, mostly in the Middle East and Afghanistan.

The U.S. has repeatedly pushed its NATO ally to allow it to conduct combat operations from Incirlik in the past, but has usually been denied permission to do so. Deny-flight missions over northern Iraq were a notable exception during Operation Northern Watch that began in 1997 and ended with the U.S. invasion of Iraq.

Turkey had resisted pressure from its NATO allies to get more involved in the fight against the Islamic State in Syria and Iraq until several incidents last month along its border resulted in the deaths of numerous Turkish military personnel, policemen and civilians.

Since then Turkish jets based at Incirlik and other bases have repeatedly flown strike missions aimed at targets in Syria and Iraq.

There was no word on Sunday from Air Force officials how long the Aviano contingent would remain in Turkey, when sorties might begin or if assets from other bases in Europe or elsewhere would join the mission at Incirlik.