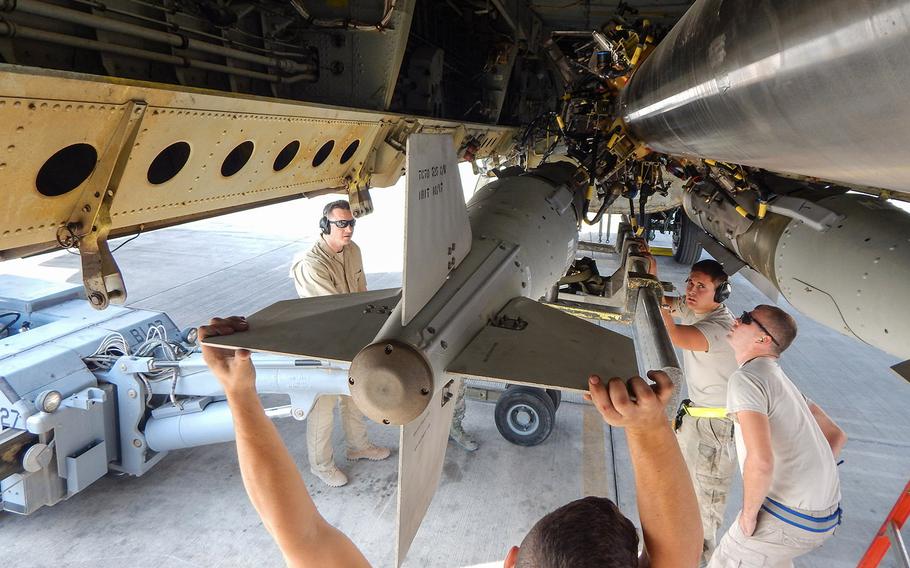 U.S. airmen with the 69th Expeditionary Bomber Squadron load smart bombs for the first time on the conventional rotary launcher of a B-52 Stratofortress, at Al Udeid Air Base, Qatar, Nov. 11, 2017. (U.S. Air Force)

“Over the past 96 hours, U.S. forces conducted air operations to strike Taliban training facilities in Badakhshan province, preventing the planning and rehearsal of terrorist acts near the border with China and Tajikistan,” U.S. Forces Afghanistan said in a statement.

The strikes also destroyed Afghan army vehicles that the insurgents had stolen and had intended to convert to vehicle-borne bombs, it added.

The operations are an expansion of a campaign that began in southern Helmand province, where American bombs continue to target Taliban drug labs, which generate significant revenue for the insurgents.

The campaign has reduced the group’s funding by more than $30 million since November, according to the U.S. military, although the figure has been questioned by some observers. Officials estimate the Taliban rake in about $200 million annually from the drug trade for their war chest.

“The Taliban have nowhere to hide,” Gen. John Nicholson, the U.S.’s top commander in Afghanistan, said in Tuesday’s statement. “There will be no safe haven for any terrorist group bent on bringing harm and destruction to this country.”

American airstrikes targeting Taliban training facilities and revenue sources are part of the Trump administration’s new approach to dealing with the insurgents, who are said to control more territory now than at an any other time since 2001, when a U.S.-led invasion removed them from power.

The group has claimed responsibility for several high-profile attacks in Kabul in recent weeks that have left scores dead. Four Americans were killed in one such attack on the city’s Intercontinental hotel.

“The Taliban cannot win on the battlefield; therefore, they inflict harm and suffering on innocent civilians,” said Nicholson. “All they can do is kill innocent people and destroy what other people have built.”

Under the new authorities, U.S. forces are permitted to hunt down the insurgents instead of just reacting to them in self-defense, as was the case before.

During the recent strikes in Badakhshan, a U.S. Air Force B-52 Stratofortress dropped 24 precision guided munitions on Taliban fighting positions, setting a record of the most guided munitions ever dropped from a B-52, the military said.

B-52 bombers were also used in a November operation that destroyed eight Taliban drug labs in Helmand, which was the first major use of the new authorities to target the group’s revenue stream. A bomber in that offensive set the previous record for smart weapons dropped at 19.

The aircraft, which have played a leading role in U.S. operations for decades, were recently reconfigured with a conventional rotary launcher to increase their reach and lethality.