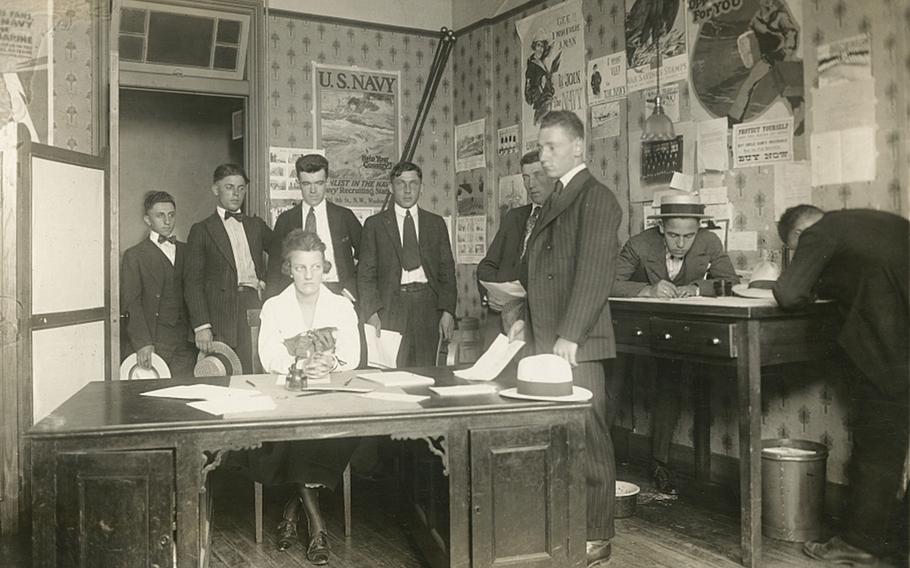 The interior of a U.S. Navy recruiting office, circa 1917. On the walls are several recruiting posters; "Help your country! Enlist in the Navy," "Gee!! I wish I were a man. I'd join the Navy", "Keep him free", and "A wonderful opportunity for you". (Library of Congress)

WIESBADEN, Germany — U.S. European Command marked the centenary of America’s entrance into World War I Thursday, kicking off a 26-month period commemorating the sacrifices of troops in a conflict that killed nearly 10 million troops in all warring nations.

For the next two years, U.S. troops will join a range of commemorations across Europe leading up to the signing of the Versailles Treaty in 1919, EUCOM said.

“The centennial of U.S. entry into World War I offers a historic opportunity to remember and honor the selfless service and sacrifice of all the Americans who came to Europe to fight for peace, liberty and stability in Europe,” Gen. Curtis M. Scaparrotti, commander of U.S. European Command, said in a statement.

The U.S. entry into the war ended a period of neutrality dating to the start of the fighting in 1914, which also ushered in an era of American military involvement in Europe.

As war raged in Europe between 1914 and 1917, U.S. leaders realized “America’s security was inextricably tied to European security,” Scaparrotti said.

The top U.S. military commander linked the struggles of the previous era and the American military’s role in restoring peace to its missions of today.

“A hundred years later, we remain just as committed to our allies and partners in the collective pursuit of unity and defense,” he said. “As we commemorate the centennial of World War I this year and next year, the men and women of U.S. European Command remain engaged, postured and ready to face today’s complex and dynamic security environment.”

The U.S. entry into the war helped allies break a stalemate on the Western Front and deliver a defeat to Germany. The peace was temporary. Some historians say Germany’s crushing defeat, and the harsh terms of its surrender, led to grievances that helped give rise to Adolf Hitler and the outbreak of World War II in 1939.