US, Europe allies focus on faster troop movements and cyberwar 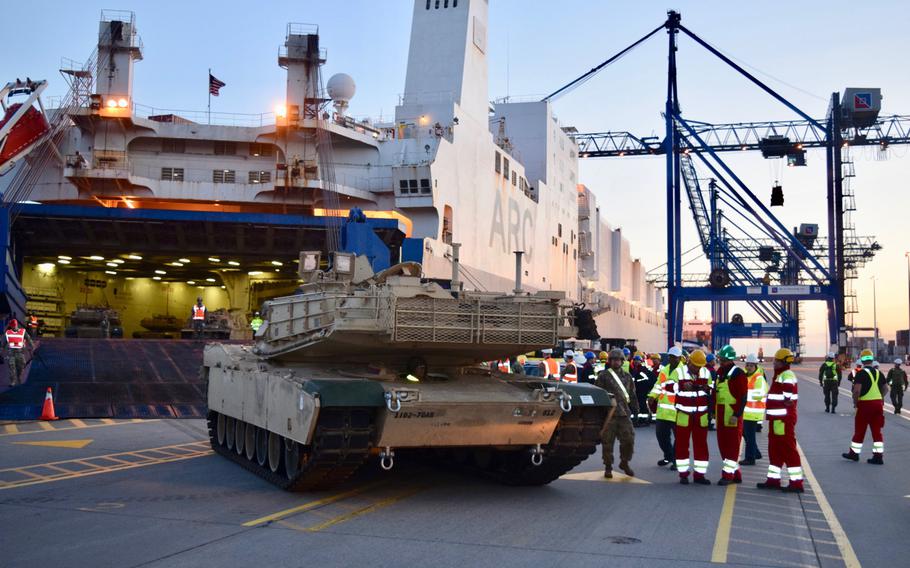 An M1A2 Abrams Battle Tank from 2nd Armored Brigade Combat Team, 1st Infantry Division, offloads from a ship in Gdansk, Poland, Sept. 13, 2017. NATO is planning to form two new commands that will focus on ensuring U.S. forces and equipment can move safely across the Atlantic to Europe and that allies can maneuver faster on the Continent. (Orlandon Howard/U.S. Army)

STUTTGART, Germany — The U.S.-led NATO alliance will adopt a plan to reconstitute two Cold War-era commands aimed at ensuring American reinforcements can arrive and maneuver around Europe during a crisis.

“We have to be able to move forces, troops across the Atlantic from North America to Europe,” Stoltenberg said.

Defense Secretary Jim Mattis, who will be in Brussels for talks with top NATO officials, is expected to back planning central to the alliance’s efforts to refocus on territorial defense in Europe.

NATO is still weighing where the new commands will be located, as well as personnel increases to man the centers. Germany has been discussed as a potential site for one of the headquarters, while the command focused on trans-Atlantic troop movements could be based in the U.S.

The moves, a reaction to concerns about a more aggressive Russia, come after years of cutbacks to NATO’s command organization, which included 22,000 troops at the end of the Cold War. There are now 7,000 troops in NATO’s command structure, Stoltenberg said.

“In a more unpredictable world, we have to adapt again to ensure that our command structure is fully capable of providing deterrence and defense at home, and projecting stability abroad,” Stoltenberg said.

During the Cold War, NATO conducted massive annual exercises — known as Reforger — to demonstrate its ability to quickly deploy U.S. reinforcements to Europe in case of a conflict with the Soviet Union.

NATO also is turning its attention to infrastructure in Europe, which alliance troops rely on when deploying forces.

“We also need to ensure roads and bridges are strong enough to take our largest vehicles,” Stoltenberg said. “NATO has military requirements for civilian infrastructure.”

During talks in Brussels, allies also will discuss the 16-year-old campaign in Afghanistan, where more troops will soon be headed.

NATO’s European members are expected to provide half the troops for a planned force increase as the alliance boosts its training mission in the country, Stoltenberg said. NATO now officially has about 13,000 troops in Afghanistan, but that number will increase to about 16,000, he said.

“Based on what we have seen so far, roughly half U.S. and half non-U.S.,” Stoltenberg said.

North Korea also is on the agenda. Stoltenberg, who recently completed a tour of the Pacific that included a stop at South Korea’s demilitarized zone, said the north’s missile and nuclear programs are global threats that “require a global response.”

“NATO maintains a strong deterrence posture. We have the capabilities and we have the resolve to respond to any aggression,” he said.