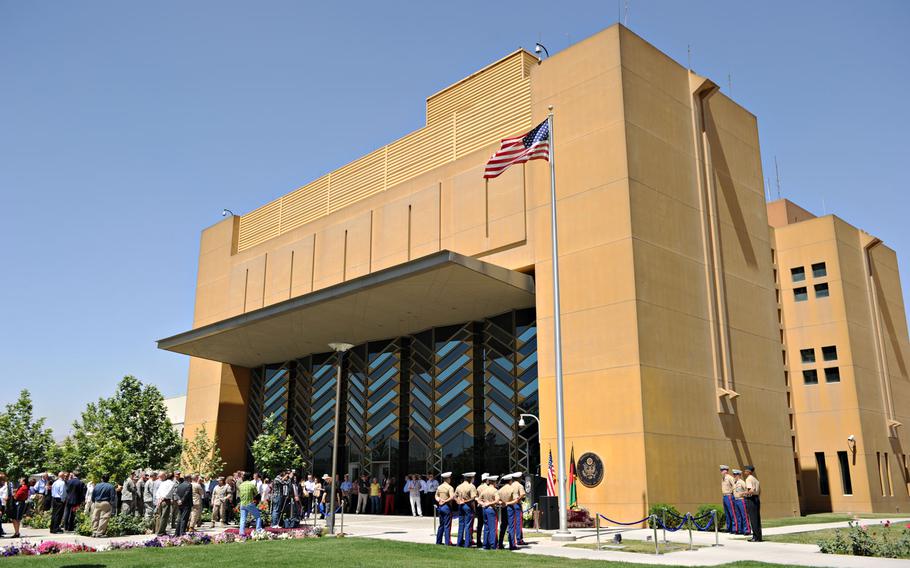 The U.S. Embassy in Kabul, Afghanistan, paid $8.4 million for meals it didn't need at the compound and other consular facilities over several years, an audit released Tuesday, Sept. 29, 2020, by the State Department?s Office of Inspector General has found. (S.K. Vemmer/U.S. State Department)

KABUL, Afghanistan — Poor oversight led the State Department to pay almost $8.4 million for unneeded meals at the U.S. Embassy in Kabul and other facilities in Afghanistan, a government watchdog agency said.

An audit by the State Department’s Office of Inspector General released Tuesday found multiple deficiencies and insufficient monitoring of a contract awarded to the McLean, Va.-based DynCorp International.

Because of poor record keeping, the U.S. can’t recover the $8.4 million paid for the meals and can’t be sure DynCorp followed the terms of its contract, the IG said.

The State Department has paid DynCorp about $353 million since 2015 to provide food, security, and medical and other services. The contract required DynCorp to provide three meals a day, seven days a week, at a rate of about $21 each to cafeterias at the U.S. Embassy and other consular facilities, the audit said.

DynCorp receives a fixed amount to provide about 2.9 million meals each year. But the actual number of meals served has dropped for several years as Embassy staff levels have steadily decreased.

A contracting officer last year based meals on 2016 personnel figures, the IG said.

“The Department did not consider the declining number of personnel living and working at the embassy compound and outlying U.S. Government facilities,” the report said.

In November, the State Department finally reduced the number of meals required, bringing down food costs by 29%. Had the change been made earlier, the Department could have saved $8.4 million in 2019, the report said.

The contracting officer told auditors that personnel numbers in Kabul are difficult to predict and that the current system is cheaper than when the Defense Department paid for meals at the embassy.

The audit also found the State Department’s contracting officers and representatives could not tell auditors how food quality standards were monitored, and said they lost their monthly oversight checklists during a computer upgrade.

DynCorp also could not provide 27% of the required documents checking sanitation, quality control and proof that goods had been received.

It also failed to develop a plan to reduce costs over time, as it had said it would when it secured the contract, the audit said.

The State Department concurred with the audit’s recommendations, including one that called for more staff to monitor contracts.

An audit report released in 2018, which looked at the U.S. Embassy in Baghdad found State Department staff had not held food service contractors there accountable.