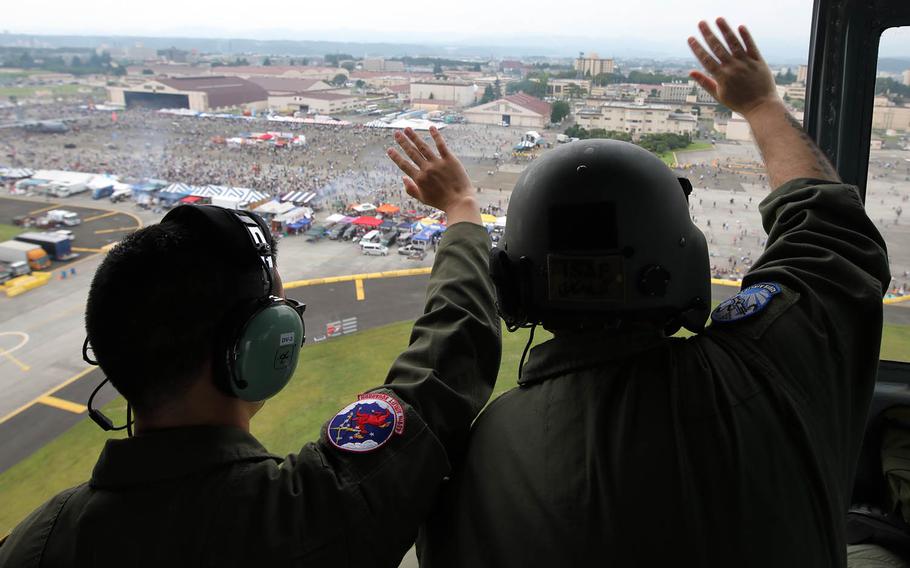 1st Lt. Kaleb Young and Tech. Sgt. Christopher Rector of the 459th Airlift Squadron wave to festivalgoers over Yokota Air Base, Japan, Sept. 17, 2016, during the Japanese-American Friendship Festival. U.S. bases in Japan cost $5.5 billion in 2016, a figure not including $1 billion in Japan-provided labor, according to the Pentagon's 2017 operation and maintenance overview. (Yasuo Osakabe/Air Force)

The defense policy debate between Donald Trump and Hillary Clinton often glosses over differences between Europe and the Pacific, where Japan and South Korea already pay substantial sums to the U.S. to offset the cost of defending them.

The issue re-emerged during Monday’s presidential debate, where Trump again called on allies to pay more for their own defense while his Democratic opponent sought to reassure overseas partners that U.S. commitments would remain firm if she wins the presidency.

“They do not pay us, but they should be paying us because we are providing a tremendous service and we’re losing a fortune,” Trump said of America’s allies. “That’s why we’re losing. We lose on everything.”

Trump said if the allies “don’t pay a fair share” they “may have to defend themselves or they have to help us out” because “we are losing billions and billions of dollars” and “cannot be the policemen of the world.”

Past U.S. administrations also have long complained that the NATO allies have not been shouldering enough of the defense burden in Europe.

In the case of Japan and South Korea, however, the allies are already paying.

U.S. bases in Japan cost $5.5 billion in 2016, a figure that doesn’t include $1 billion in Japan-provided labor, according to the Pentagon’s 2017 operation and maintenance overview. Half of the $5.5 billion went toward U.S. personnel paychecks and costs.

U.S. and South Korean officials say Seoul paid nearly $850 million last year, or about half the total cost for the 28,500 U.S. troops stationed on the peninsula.

South Korea is monitoring the U.S. presidential election and how it might affect relations in the future, South Korean Foreign Ministry spokesman Cho June-hyuck said Tuesday. But he insisted the alliance with the U.S. remains strong.

“I can tell you that our government has been contributing and playing a role to maintain and strengthen Korean-U.S. joint defense capability and provide stable conditions for (U.S. forces in Korea) to be stationed,” Cho said.

Clinton, a former secretary of state, has insisted that the U.S. would honor its military obligations.

“I want to reassure our allies in Japan and South Korea and elsewhere that we have mutual defense treaties and we will honor them,” Clinton said in Monday’s debate. “It is essential that America’s word be good.”

Washington lawmakers from both parties and senior military officials often refer to the U.S.-Japan security pact as a “cornerstone alliance” that has underwritten the post-World War II security and economic structure of the Asia-Pacific region.

Military assets in Japan are used to monitor and defend against potential missile attacks on the U.S. and its allies, mount counterterrorism operations and guarantee freedom of navigation for global trade, among other missions.

The strength of the U.S. military commitment to North Asia has taken on added significance in the face of a growing nuclear and missile threat from North Korea. Trump said he would use U.S. trade and diplomatic leverage with China to press Beijing to rein in the North Koreans.

America’s military role in Asia has also become intertwined with the issue of free trade, which has become a major contributor to Trump’s appeal among voters.

Trump has slammed free trade agreements, including the Trans-Pacific Partnership, which would establish rules for nearly 40 percent of the global economy, including the U.S. and Japan. Trump and other critics believe TPP would send American jobs to Asia.

Clinton has said she also opposes TPP, even though she called it the “gold standard” of international trade agreements before the final details were negotiated.

President Barack Obama and Republican House Speaker Rep. Paul Ryan support the agreement, saying the 12-nation accord would create jobs and give the U.S. the chance to exert lasting, democratic influence over the Asia-Pacific’s economic structure.

Supporters also fear that rejection of TPP would enable China, which is not a party to the deal, to expand its economic influence in Asia. Over time that could weaken the American political and military posture throughout the Pacific, TPP supporters say.