US drops 'mother of all bombs' on ISIS caves in Afghanistan 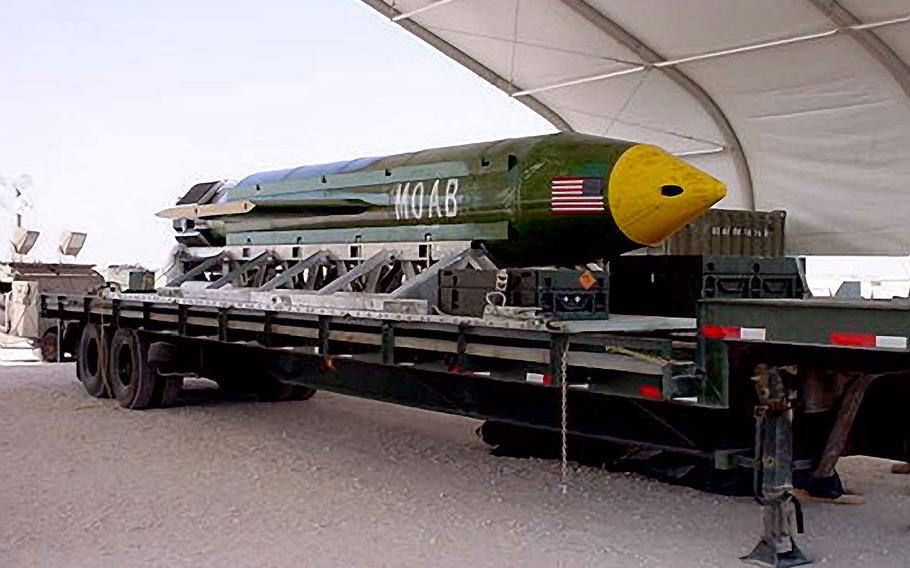 The GBU-43/B Massive Ordnance Air Blast bomb sits at an air base in Southwest Asia. The MOAB is also called "The Mother of all Bombs." (Courtesy photo)

The GBU-43/B Massive Ordnance Air Blast bomb sits at an air base in Southwest Asia. The MOAB is also called "The Mother of all Bombs." (Courtesy photo) WASHINGTON — The United States dropped the largest conventional bomb ever deployed in combat Thursday to destroy a series of Islamic State caves in eastern Afghanistan, the Pentagon said.

The bomb hit a mountainous area along the Afghanistan-Pakistan border, where sustained firefights with ISIS militants have taken place. Army Special Forces Staff Sgt. Mark R. De Alencar, 37, was killed Saturday by small-arms fire in Nangarhar when his unit was attacked.

ISIS is estimated to have between 600 to 800 fighters in the area, Stump said. The bomb was selected to clear out ISIS fighters and buildings to minimize risk to U.S.-led coalition forces.

A message posted to Facebook, said to be from the Nangarhar governor’s office, addressed the bombing.

ISIS in Afghanistan, officially known as Islamic State-Khorasan, had been fortifying their position with roadside bombs, bunkers and caves, Nicholson said.

The bomb has 21,600 pounds of explosives meant to detonate on the surface. The Air Force has another “bunker buster” bomb, the massive ordinance penetrator, which is a physically larger, heavier bomb than the one dropped in Nangarhar on Thursday because it is designed to penetrate 200 feet underground upon contact, but carries less explosives, about 5,000 pounds.