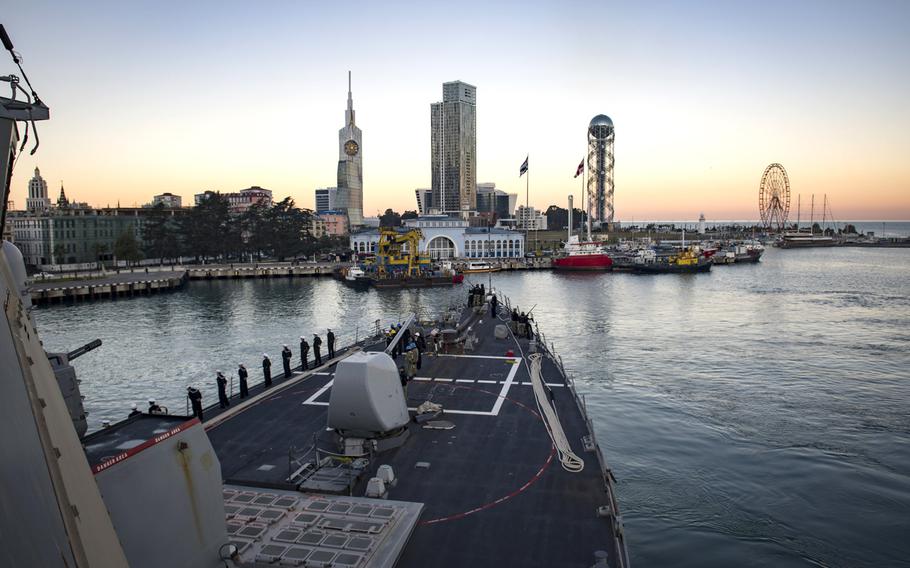 The destroyer USS Donald Cook arrives in Batumi, Georgia, Jan. 21, 2019. USS Donald Cook, forward-deployed to Rota, Spain, is on its eighth patrol in the 6th Fleet area of operations in support of U.S. national security interests in Europe and Africa. (Ford Williams/U.S. Navy)

The destroyer USS Donald Cook arrives in Batumi, Georgia, Jan. 21, 2019. USS Donald Cook, forward-deployed to Rota, Spain, is on its eighth patrol in the 6th Fleet area of operations in support of U.S. national security interests in Europe and Africa. (Ford Williams/U.S. Navy) With Istanbul in the background, the USS Donald Cook heads for the Black Sea. (Courtesy Yoeruek Isik)

The destroyer USS Donald Cook has arrived for a port visit in the Black Sea nation of Georgia, as Russia monitors the ship’s movements at a time of heightened tensions in the region.

The ship docked Monday at Batumi on the sea’s eastern coast after transiting the Dardanelles Strait on Saturday, the Navy said in a statement.

The destroyer’s visit to Georgia and the Black Sea follows the Russian seizure of three Ukrainian vessels and arrest of 24 sailors in late November at the Kerch Strait, a move condemned by U.S. Secretary of State Mike Pompeo and much of the West.

The USS Fort McHenry, a dock-landing ship, conducted a Black Sea operation earlier this month, which included transporting teams from the 22nd Marine Expeditionary Unit. The last destroyer to patrol the Black Sea was the USS Carney in August.

The Russian state news agency Tass reported that Russia’s Black Sea Fleet has been monitoring the USS Donald Cook since it entered the Black Sea on Saturday.

“The Russians place great stock in both of these American capabilities and view them as inherently destabilizing,” Petersen said.

Moscow is also wary of Georgia’s relationship with the West. In 2008, Russia and Georgia — whose president at the time wanted to join NATO — fought a weeklong war over two Georgian territories claimed by Russian-backed separatists. Georgia lost control over about 20 percent of its territory as a result and Moscow continues to protect and recognize the regions of South Ossetia and Abkhazia as independent nations, despite international condemnation.

A Navy statement said the destroyer visit is part of an ongoing mission to “demonstrate the collective resolve to Black Sea security.”

“The United States and the U.S. Navy continue to stand alongside our allies and partners in support of shared regional interests and maritime stability,” Cmdr. Matthew J. Powel, the Donald Cook’s commanding officer, said in a statement.

According to an international convention which governs foreign naval access to the Black Sea, warships from non-Black Sea countries can remain in the area for a maximum of 21 days.

Tensions have simmered in the region since Russia took the Crimean Peninsula from Ukraine in 2014. Most of the world still considers Crimea to be rightfully Ukrainian territory.

Tensions escalated last year over the incident at the narrow Kerch Strait, which borders Crimea and internationally recognized Russian territory.

Russia opened fire on three Ukrainian vessels at the strait, claiming they had trespassed in Russian waters, then boarded the ships and arrested the crews. NATO has called for Russia to release the Ukrainian prisoners but the Kremlin insists they must stand trial.