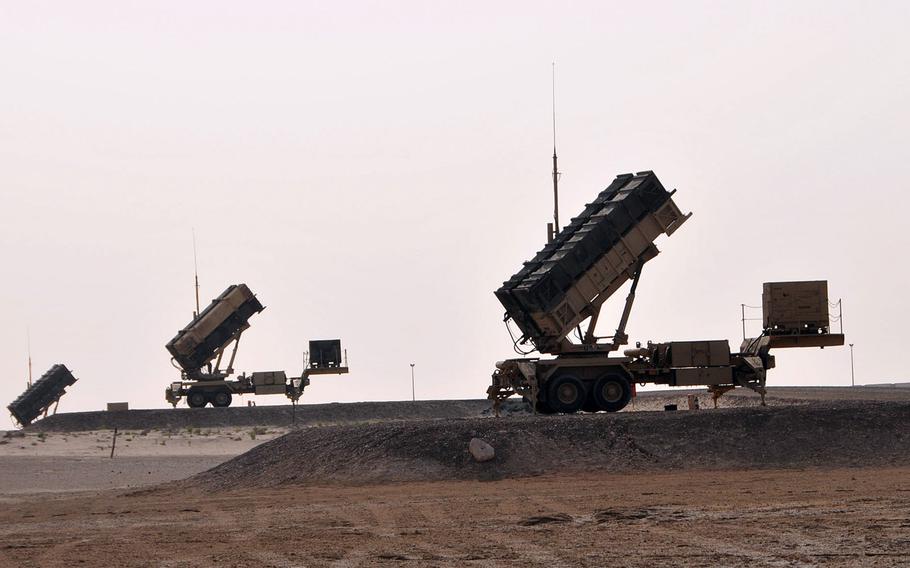 A set of three U.S. Army Patriot missile launchers stand ready to defend against airborne threats at an undisclosed location in southwest Asia in 2014. The U.S. has been deploying Patriot missile batteries in Iraq as a war of words between Washington and Tehran appears to be escalating tensions. (Eric Peterson/U.S. Air Force)

The U.S. has deployed Patriot missile batteries in Iraq as the coalition battling the Islamic State group in the country draws down and a war of words between Washington and Tehran ramps up.

Ground-based air defenses in Iraq were being set up “to protect Iraqi, coalition, and U.S. service members from a variety of air threats,” a Pentagon official confirmed Wednesday, declining to say where or whether they were operational.

“For operational security reasons, we are not providing status updates as those systems come online,” said Pentagon spokesman Cmdr. Sean Robertson in an email.

The systems, able to track and shoot down ballistic missiles, have reportedly been deployed to bases hit by Iranian missile strikes in January that left more than 100 Americans with brain injuries.

A resident of Irbil, the capital of northern Iraq’s Kurdistan region, told Stars and Stripes he spotted a missile battery at the base there this week. One has also been sent to al Asad Air Base in Anbar province, unnamed U.S. and Iraqi security officials told Agence-France Presse, and two more were expected to deploy from Kuwait.

The Iraqi government is “well aware” of the need for such air defenses, Robertson said, and U.S. officials are coordinating closely with their Iraqi counterparts.

“It is important to note that repeated attacks on Iraqi bases, which violate Iraqi sovereignty, have killed and injured Iraqi, coalition, and U.S. service members,” he said.

Meanwhile, President Donald Trump accused Iran or its proxies of plotting a “sneak attack” on U.S. forces in the country, and warned Wednesday on Twitter that Iran would pay a “heavy price indeed” if it carried out the plans.

At a later White House briefing, Trump would not provide specifics, but said the U.S. had “very good information they were planning something.”

Iranian Foreign Minister Mohammad Javad Zarif responded to Trump’s warnings with one of his own. “Openly Iran starts no wars, but teaches lessons to those who do,” he tweeted.

The Shiite militia Kataeb Hezbollah, which the U.S. struck after two rocket attacks in recent months killed and wounded coalition personnel at Iraqi bases, has threatened revenge and warned of a “painful” response to any further U.S. assaults.

The saber-rattling comes after media reports of the Patriot systems’ arrival in Iraq and a New York Times report that said the Pentagon had ordered American military leaders in the country to prepare for increased fighting and develop plans to destroy Iranian proxy forces.

The systems began arriving as the U.S.-led coalition was shuttering smaller outposts and consolidating forces on larger bases, winding down its anti-ISIS mission. Some of the more than 5,000 U.S. troops and other allied forces have also been sent out of the country after Iraq suspended military training to focus on battling the coronavirus pandemic.

The U.S. drawdown was partly linked to the mounting tensions between Washington and Tehran, an official told The Associated Press.

“We’re taking precautions,” the official said, adding that troubling indicators have been “coming across the threat stream” on a daily basis.