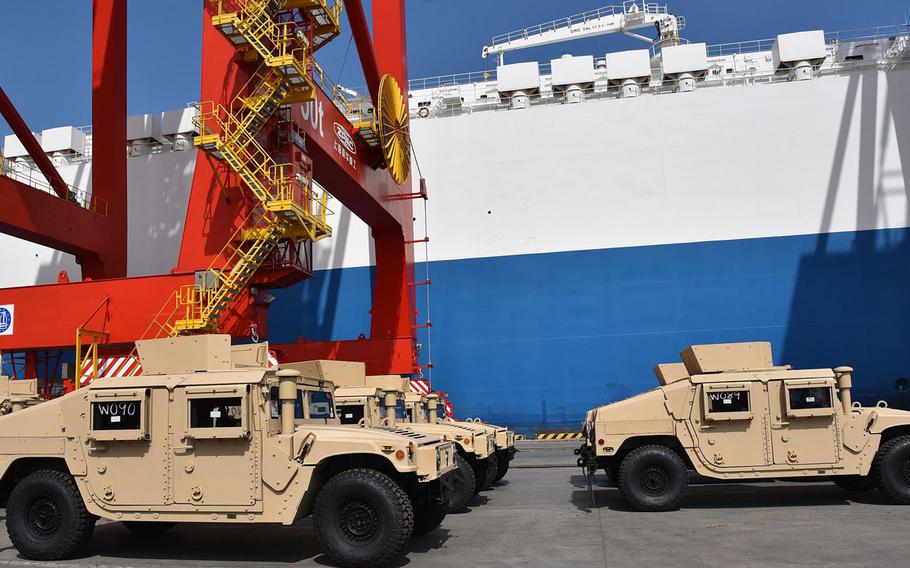 A shipment of 54 new Humvees arrived in Djibouti this week, as part of a $31 million train-and-equip partnership between the U.S. government and the Djiboutian military. The military vehicles will be delivered to the Djibouti armed forces for use by its new Rapid Intervention Battalion. (U.S. Embassy Djibouti)

“With the delivery of these vehicles, we will increase the capability of the (Rapid Intervention Battalion) to conduct mounted patrols and respond quickly to any mission,” Army Capt. Michael Simpson, who is leading the U.S. training effort in Djibouti, said in a statement.

The delivery comes as the U.S. vies with China for influence in Djibouti, a former French colony on the Horn of Africa that hosts China’s first overseas military base.

The U.S. military has operated out of Djibouti since 2001, spending more than $200 million annually in the country, or about 10% of the republic’s gross domestic product, AFRICOM said in a statement. That makes the U.S. the second-largest employer after the national government.

“The U.S. military presence in Djibouti affords our partners an implicit security guarantee, in addition to economic benefits,” the statement said.

Still, China’s military presence in the country, combined with its track record of investing in and controlling foreign ports as part of its global economic strategy, have raised concerns about Beijing challenging the U.S. in the region.

The National Defense Authorization Act, recently passed by Congress and expected to be signed into law by President Donald Trump, calls for the Pentagon to develop a strategy to address security concerns posed by China’s new military base, including possible threats to U.S. installations and logistics chains in Africa.

The military also must assess Djibouti’s Chinese-held public debt, which the NDAA warns could be used as economic coercion. A concern cited by lawmakers is that if Beijing takes commercial control of the Port of Djibouti in debt repayment, it could curtail access by the U.S. military.

For AFRICOM, Camp Lemonnier in Djibouti has long been the anchor for missions around the volatile Horn of Africa and a launching pad into neighboring Somalia. The United States has a lease to continue operating out of the camp until 2034, with the option for a 10-year extension.

The Rapid Intervention Battalion was built up with U.S. training at the request of the Djiboutian government. The troops were drawn from a cadre of experienced officers and enlisted personnel, AFRICOM said.

“The RIB is the first (Djiboutian) Special Force that the (U.S.) has agreed to fully support,” Army Lt. Gen. Zakaria Cheikh Ibrahim said after a change of command ceremony in Djibouti. “I would like to thank the team of American instructors who spare no effort to transmit their knowledge to the soldiers of the RIB.”