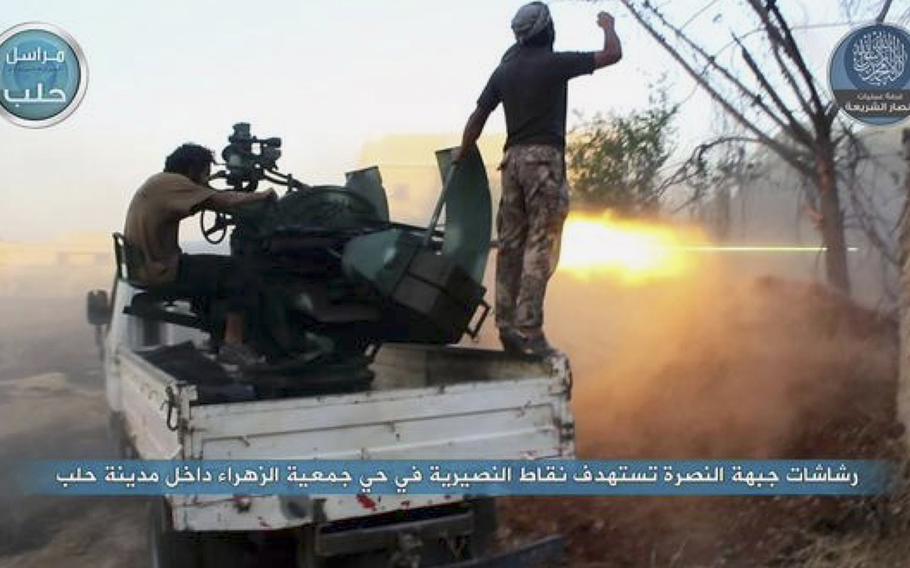 In this image posted on the Twitter page of Syria's al-Qaida-linked Nusra Front on early Tuesday, July 7, 2015, fighters from the Nusra Front fire their weapons against the Syrian government forces at the western Zahra neighborhood in Aleppo city, Syria. (Al-Nusra Front via AP)

At least one member of the U.S.-trained New Syrian Forces has died and five more have been captured during repeat attacks by al-Qaida affiliate Nusra Front in northern Syria, a senior defense official confirmed Tuesday.

Just an hour earlier, another Pentagon official backed off claims that all 54 members of the U.S.-trained New Syrian Forces were safe after an attack by the rival Nusra Front.

Pentagon spokesman Navy Capt. Jeff Davis would only say that his earlier statement was no longer correct.

“We are both looking into it and not willing to share details on it,” he said in a briefing Tuesday. “There’s been a lot of tactical developments in the last few days.” Providing further details on the attacks, he said, would “fundamentally put these people at risk.”

Davis said the U.S. had not made attempts to rescue any U.S.-trained fighters.

On Friday, about 50 Syrian rebels from the Nusra Front launched an assault on a compound housing the New Syrian Forces and members of 30 Division, another rebel faction that has U.S. backing but whose members did not go through training. That attack was repelled when the New Syrian Forces called in air support, Davis said.

The Obama administration authorized the Pentagon on Friday to use force to help defend the U.S.-trained group — even if attackers were allied with the Syrian government and President Bashar Assad.

The New Syrian Forces — 54 fighters who went through an extensive U.S. vetting, training and equipping program — represent the first fighters to complete a massive $500 million effort to train about 5,000 local forces a year to fight the Islamic State. To date, 7,000 fighters have applied for the program, which has only managed to fully train this first group of 54 fighters and has cost $36 million.

A second group of fighters is reportedly in the U.S. training pipeline. The Pentagon did not release specific numbers but said hundreds of fighters have been considered for the training. However, the vast majority have not made it through the vetting process or left before training to join the fight against Assad’s forces.