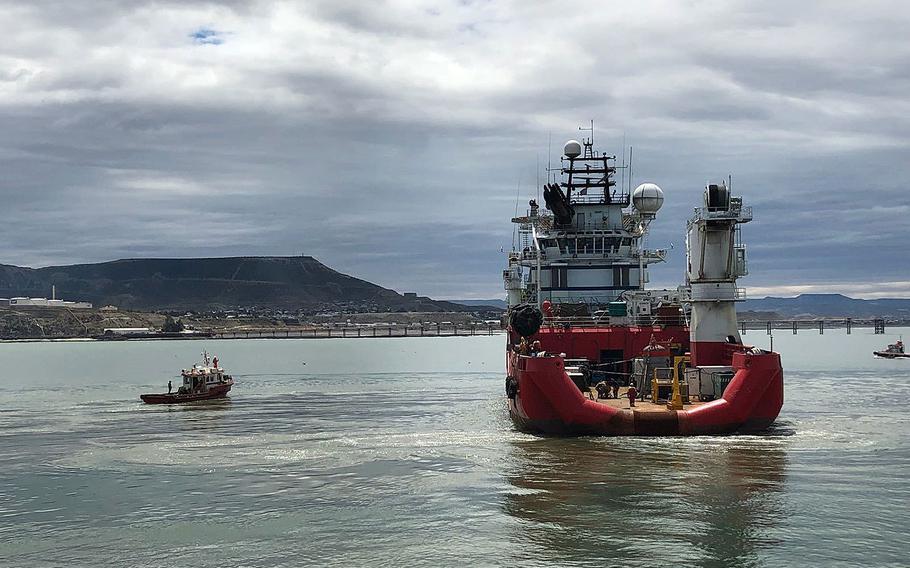 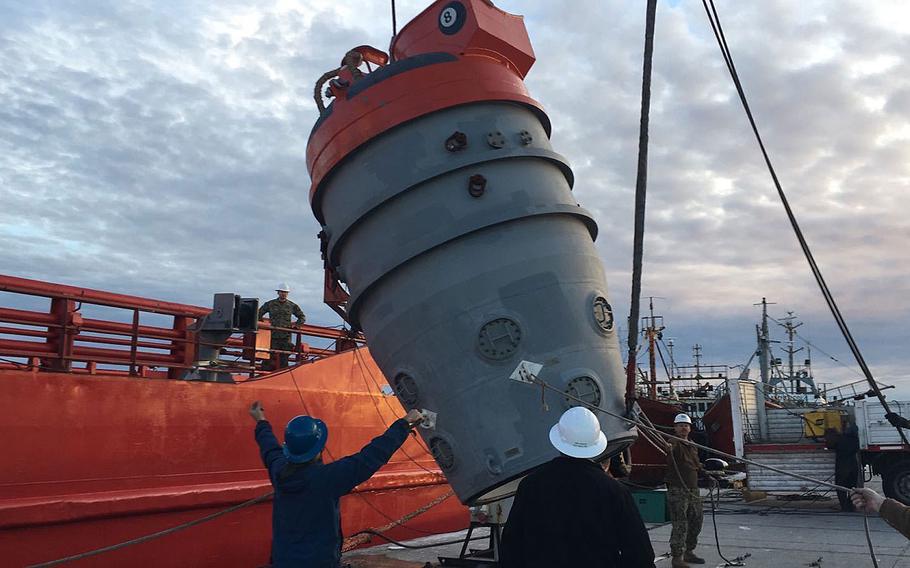 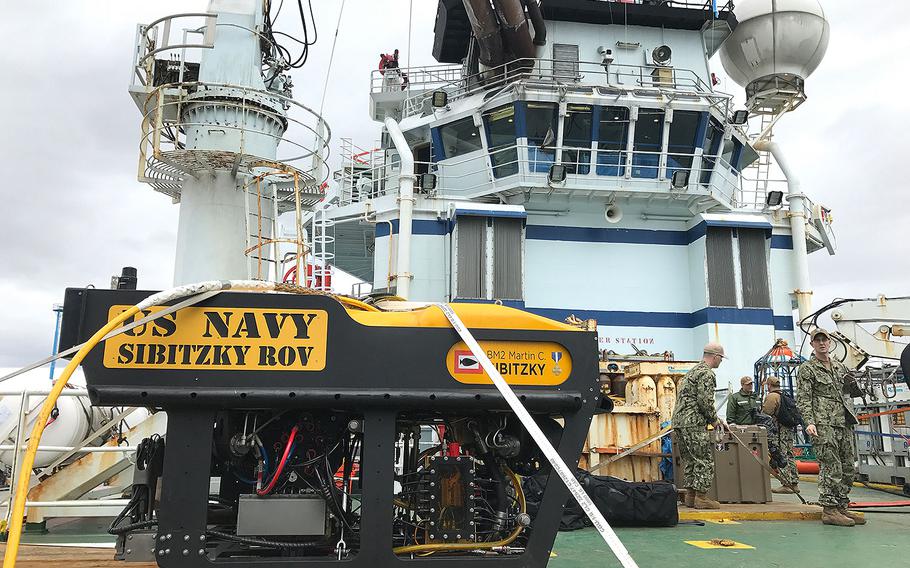 A Remotely Operated Underwater Vehicle (ROV), operated by the U.S. Navy’s Undersea Rescue Command (URC), is staged on board the Norwegian vessel Skandi Patagonia to support the ongoing search for the Argentine navy submarine ARA San Juan in the South Atlantic. (U.S. Navy)

WASHINGTON — U.S. military ships and aircraft on Wednesday continued to assist the search for an Argentine submarine that has been lost in the South Atlantic for seven days as experts say the crew might be reaching a critical period of low oxygen.

The ARA San Juan, a TRA 1700 German-built diesel-electric submarine with a crew of 44, went missing Nov. 15 when it was sailing from the extreme southern port of Ushuaia to the city of Mar del Plata, about 250 miles southeast of Buenos Aires. The Argentine navy and outside experts worry that oxygen for the crew would only last seven to 10 days if the sub is intact but submerged. Authorities still do not know if the sub rose to the surface to replenish oxygen and charge batteries. The Argentine navy has said the submarine reported a battery failure before it went missing and authorities have no specific details of the problem.

U.S. Navy and Air Force equipment and personnel have joined more than a dozen international airplanes and ships in the maritime search despite stormy weather that has caused powerful waves of more than 20 feet.

Hopes were lifted after brief satellite calls were received and when sounds were detected deep in the South Atlantic.

But Cmdr. Erik Reynolds, a spokesman for U.S. Navy’s Fourth Fleet, said the submarine has not been found.

“Those stories are false,” Reynolds said Wednesday. “No submarine has been located.”

A U.S. Navy P-8 Poseidon aircraft later spotted flares, and a life raft was found in the search area, but authorities said they did not come from the missing submarine.

Reynolds said underwater drones are en route to the search area after being deployed on a ship Tuesday. The last known location of the submarine was the waters off the coast of the Patagonia region of southern Argentina.

The U.S. Navy has deployed several unmanned underwater vehicles, or UUVs, to assist in the search, including one Bluefin 12D type, capable of searching in deep water for long periods, and three Iver 580 UUVs. They are equipped with advanced sonar to map the ocean floor and capable of detecting downed submarines or wreckage.

Two Navy P-8A maritime surveillance aircraft, designed to hunt and destroy submarines, are also continuing in the search, Reynolds said. A P-3 Orion, an older model of sub hunter that is used by NASA for oceanographic research, is also involved in the search.

The P-8 Poseidon carries passive sonar systems that use air-dropped sonar buoys, synthetic aperture radar, high resolution optical/infrared sensors and a magnetic anomaly detector designed to locate submarines by the magnetic field generated by their metallic hulls. The RV Atlantis, an oceanographic research ship with advanced sensors owned by the Navy, has also been deployed to the area as of Tuesday, Reynolds said.

The U.S. operation to locate the submarine is spearheaded by the Undersea Rescue Command, a specialized unit based out of San Diego. The UUVs are operated by Submarine Squadron 1.

Reynolds said the Navy has sent a Submarine Rescue Chamber, a pressurized diving bell system that can be used to rescue up to six submariners at a time at depths of up to 850 feet. He said a more advanced Pressurized Rescue Module, capable of operating at greater depths, has arrived Tuesday at Comodoro Rivadavia, Argentina.

The Air Mobility Command of the U.S. Air Force said the unit has been moving Air Force and Navy personnel to assist in the search operation. Three C-5M Super Galaxy and seven C-17 Globemaster III cargo aircraft have transported 98 passengers and more than one million pounds of equipment to Argentina as of Wednesday.

The U.S. deployment includes equipment and personnel from the U.S. Southern Command.

The U.S. Navy would not comment on how long the crew of the submarine could be expected to survive, saying it depends on the extent of the damage to the submarine, but that time is running short.

“They are counting it in hours,” said Lt. Mary Kate Walsh, a Navy spokeswoman.

Bryan Clark, a senior fellow for the Washington think tank Center for Strategic and Budgetary Assessments and former submarine officer, said it is difficult to say how long the missing sub crew might be able to hold out. Diesel-electric submarines like the San Juan, unlike nuclear submarines, need to regularly surface to recharge their electrical systems and do not have the same level of operational endurance as nuclear submarines.

“Normally, it could deploy for up to 30 days. It could remain submerged that entire time, snorkeling every few days to recharge its batteries. It could deploy longer, if it could be resupplied with food at sea and does not use a lot of fuel,” he said.

The submarine would have emergency equipment like oxygen tanks and chlorate candles, which use chemical reactions to generate oxygen, Clark said. The true hazard would be carbon dioxide generated by the crews respiration, he said.

The submarine would have tanks onboard with chemicals that could absorb carbon dioxide, but there would be limits, Clark said.