US considers more troops and drills in Greece Buy Photo
A Patriot missile bursts out of its launcher at the NATO air missile firing installation outside Chania, Crete, Thursday, Oct. 1, 2015. The U.S. wants to increase military drills and rotate more troops through bases in Greece. (Michael Abrams/Stars and Stripes)

Buy Photo
A Patriot missile bursts out of its launcher at the NATO air missile firing installation outside Chania, Crete, Thursday, Oct. 1, 2015. The U.S. wants to increase military drills and rotate more troops through bases in Greece. (Michael Abrams/Stars and Stripes) 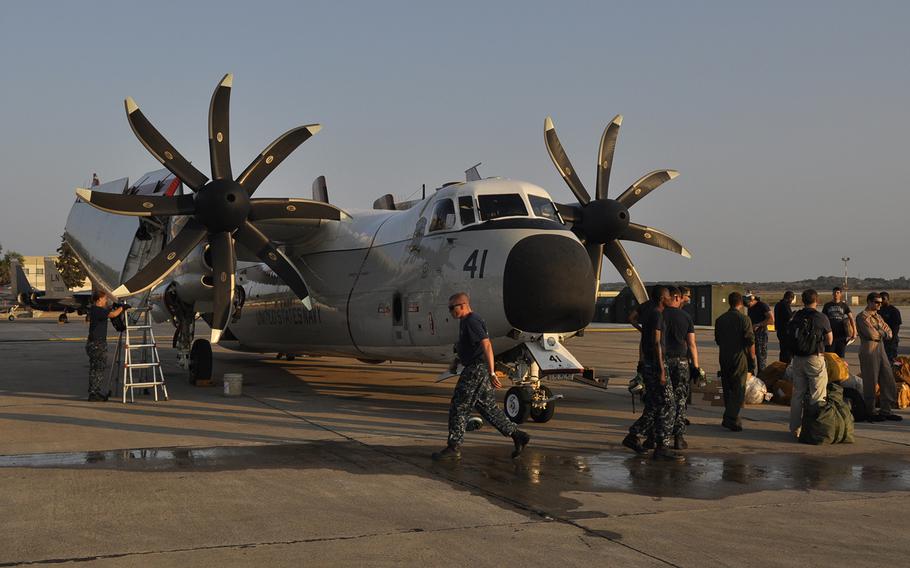 Buy Photo
Crew members and sailors gather around a C-2A cargo aircraft at the naval base at Souda Bay, Crete. The installation has long served as a remote station to supply and replenish ships operating operating in the eastern Mediterranean. (Steven Beardsley/Stars and Stripes)

The United States may increase drills and rotate more troops through bases in Greece, which offer logistic support for U.S. forces within range of hot spots in northern Africa and the eastern Mediterranean, America’s top military leader said.

Greek officials have raised the possibility of expanding U.S. access to those bases, Chairman of the Joint Chiefs of Staff Gen. Joseph Dunford told reporters in Athens on Tuesday.

“(They) made a general overture saying they would be willing to consider that, and I certainly was enthusiastic about the possibility,” Dunford told the Pentagon’s internal news service.

Dunford said U.S. European Command and the State Department would work with their Greek counterparts on the plans.

Increased access to Greek bases would enable more troops to rotate through for joint training initiatives and could possibly lead to enhanced intelligence and reconnaissance efforts. Unrest in nearby Libya and Syria are persistent security concerns.

The U.S. military has long operated out of bases in Greece, including Naval Support Activity in Souda Bay and Greece’s Larissa Air Force Base, where the U.S. operates MQ-9 Reaper drones.

“We ... have taken advantage of Souda Bay — it’s a critical piece of infrastructure here in the region, and Greece has also been open to expanding training opportunities for our forces that are stationed in Europe, in particular for U.S. Army units to do training with helicopters,” Dunford told DOD News.

While the U.S. wants to do more in Greece, Washington isn’t looking to establish a large base for a lot of forward-based troops. Instead, the idea is for a light military footprint with troops rotating in and out, Dunford said.

Dunford’s visit to Greece comes as NATO is increasingly emphasizing security concerns along its southern doorstep. The alliance recently set up a counterterrorism intelligence center in Naples to monitor regional threats. Increased Russian naval activity in the Mediterranean Sea also has the alliance’s attention.

“They (the Greeks) are looking around, and the U.S. is still the best partner available to them,” a military official told DOD News.