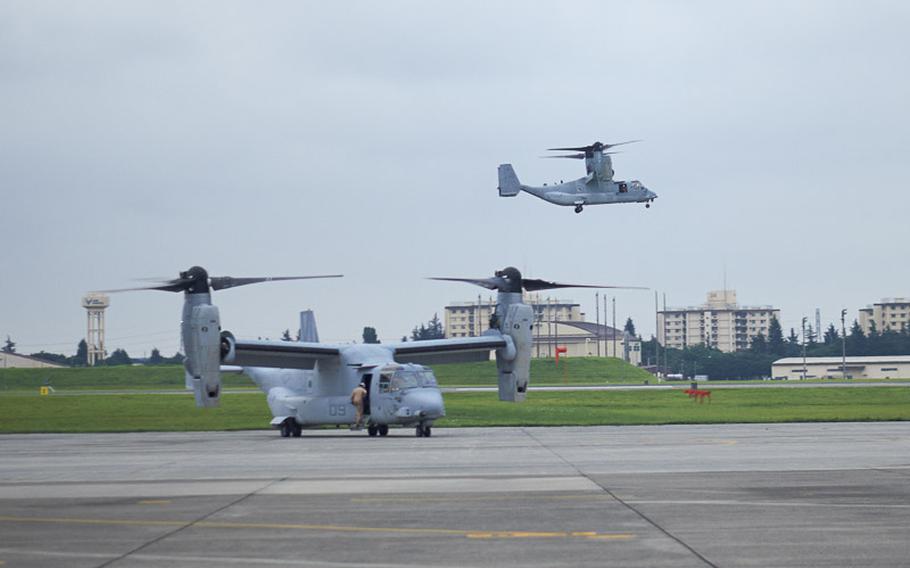 Two MV-22 Ospreys from Marine Corps Air Station Futenma, Okinawa, prepare to refuel at Yokota Air Base near Tokyo on July 19, 2014. The Ospreys were en route to the Sapporo Air Show. (James Kimber/Stars and Stripes)

YOKOTA AIR BASE, Japan — The U.S. may station a dozen CV-22 Osprey tilt-rotor aircraft at Yokota Air Base next year, according to Japanese news reports.

The CV-22 is the Air Force’s version of the Osprey, which uses tilt-rotor engines to fly like a fixed-wing aircraft or take off and land like a helicopter. The aircraft, designed to carry special operations troops, have seen action in Afghanistan and, earlier this year, they were sent to Central Africa to bolster efforts to track down the Lord’s Resistance Army rebels.

The plan to base Ospreys at Yokota was signaled last year by Pacific Air Forces commander Gen. Herbert Carlisle, who told a news conference in Washington, D.C., that the aircraft could be stationed there or at Kadena Air Base on Okinawa from 2015.

“We firmly plan on having CV-22s in the Pacific,” Carlisle said at the time.

U.S. Forces Japan this week did not confirm or deny the reports, which quote an unidentified Japanese government source. USFJ spokesman Kenneth Hoffman said in an email Tuesday that basing for CV-22s in the Asia-Pacific is still “pre-decisional.”

“As part of the planning process, the Department of Defense evaluates a range of possible basing options for its forces. That process is currently on-going and includes multiple locations in the Asia-Pacific region,” he said.

Two Ospreys stopped at Yokota, west of Tokyo, for the first time in July, where they refueled en route to the July 20 Sapporo Air Show. The Ospreys’ participation in the air show was aimed at raising public awareness of the aircraft, which starting flying routine training missions over mainland Japan this year.

Japanese officials will seek input from people living near Yokota — the headquarters for USFJ — before any Ospreys are based there, according to the Japanese reports, adding that many are likely to oppose the move.

The reports state that the U.S. and Japanese governments had planned to fly the Ospreys out of Kadena but that Tokyo is being looked at to avoid adding to the burden on Okinawa, which already hosts 24 MV-22 Ospreys at the Marine Corps’ Futenma Air Station.

Some Okinawans have opposed the use of Ospreys on the southern Japanese island, claiming the aircraft have unresolved safety issues.

There has generally been less opposition to the U.S. military in mainland, compared with Okinawa.