US committed to Europe force extension through 2020, Mattis says 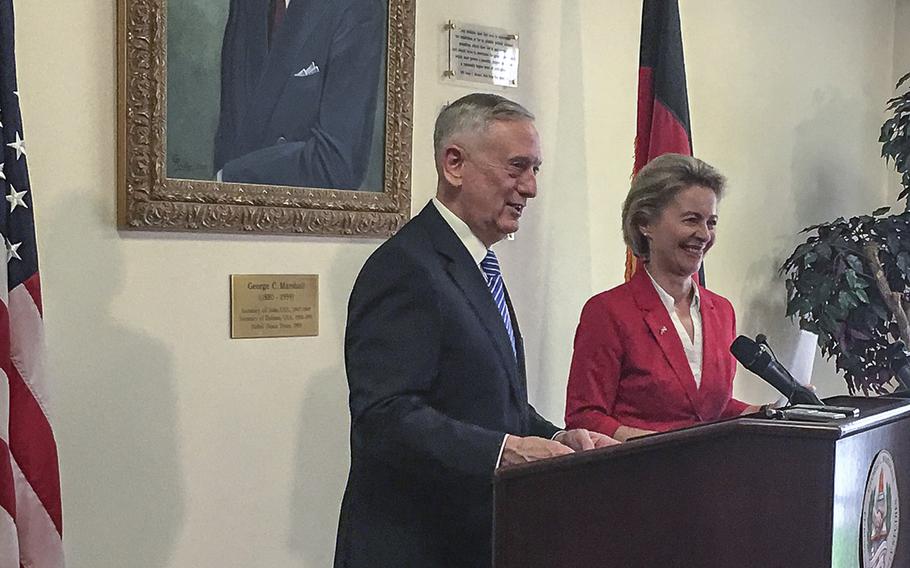 GARMISCH, Germany — The United States will extend its forward presence of forces in eastern Europe through 2020, Defense Secretary Jim Mattis said Wednesday, continuing a commitment to the Continent’s security that was declared 70 years ago this month.

The extension of forces to train with and strengthen eastern Europe’s ability to counter any further acts of Russian aggression is in line with what former Gen. George C. Marshall, then secretary of state, outlined June 5, 1947, in what became known as the Marshall Plan — a plan to spend billions of U.S. dollars to help Europe rebuild and rebuff the influence of the Soviet Union after World War II, Mattis said.

“We can see today in Europe the realization of a strong vision,” Mattis said in a speech at the George C. Marshall European Center for Security Studies. “A peaceful, industrious and prosperous continent, free from tyranny, possessing the military strength to defend itself from aggression.”

Today, that commitment is embodied in the buildup of forces and increased U.S. spending to increase training and exercises with NATO and partner forces, he said. Some 1,000 U.S. soldiers from the 2nd Squadron, 2nd Stryker Cavalry Regiment, are leading a Poland-based battle group of an enhanced forward presence in Europe. Four multinational battle groups, totaling about 4,500 troops from 15 member nations, conduct exercises and train to quickly mobilize.

Mattis met with his German counterpart Ursula von der Leyen at the George C. Marshall European Center for Security Studies in Garmisch to commemorate the anniversary. The two also discussed Germany’s contributions to the proposed surge of forces in Afghanistan and future plans for the European enhanced forward presence, Mattis said, without providing details.

The return of U.S. forces to Europe was prompted by Russia’s invasion and annexation of Ukraine’s Crimean Peninsula in 2014. That support was temporarily put into question during the 2016 presidential campaign as then-candidate and now President Donald Trump questioned NATO’s value and criticized alliance members that failed to meet commitments to spend 2 percent of their budgets on defense.

The Trump administration has since reaffirmed the importance of that alliance and has committed $4.8 billion in the 2018 defense budget to expand the U.S. European Reassurance Initiative, Mattis said.

“Beyond any words in the newspapers, you can judge America by such actions,” he said.

Mattis said the budget includes funds to extend the presence to 2020 but could not say whether it would also increase U.S. forces.

“Russia must know what we stand for, and equally, what we will not tolerate. We stand for freedom and we will never surrender the freedom of our people or the values of our alliance that we hold dear.”

Moscow has denounced the military buildup as provocative, and has repeatedly asserted it has no designs on any NATO member state.

Mattis acknowledged that the support has not been one way: In the years since the Sept. 11, 2001, attacks on the United States, European allies have contributed more than 39,000 troops to operations in Afghanistan and 59,000 to operations in Iraq,

The Marshall Plan became the underpinning of the trans-Atlantic alliances that would follow, Karen Donfried, president of German Marshall Fund of the United States, said Wednesday.

“NATO grew out of that” in 1949, Donfried said, as did the European Union, which just marked its 60th anniversary.

When Marshall proposed the initial plan in 1947, he was asking a United States weary of war to commit billions of dollars — the equivalent of 12 percent of the U.S. national budget in 1947 — to rebuild Europe, Donfried said. Marshall was able to closely tie the success and political security of Europe to the success of the United States. He mobilized Congress to go across the U.S., to rotary clubs and town halls, to sell the idea.

Today, as the U.S. government faces continued pressure to rein in spending, the idea of cutting NATO funding and U.S. presence overseas has become popular, but that would be shortsighted, said Jeff Rathke, the deputy director for the European program at the Center for Strategic and International Studies, a nonpartisan Washington-based think tank.

“The reason U.S. forces are in Europe is not out of charity to the Europeans,” he said. “The security of the U.S. would be directly affected if Europe came under the domination of an unfriendly power.”