US closer to sale, lease of Apache helicopters to Iraq 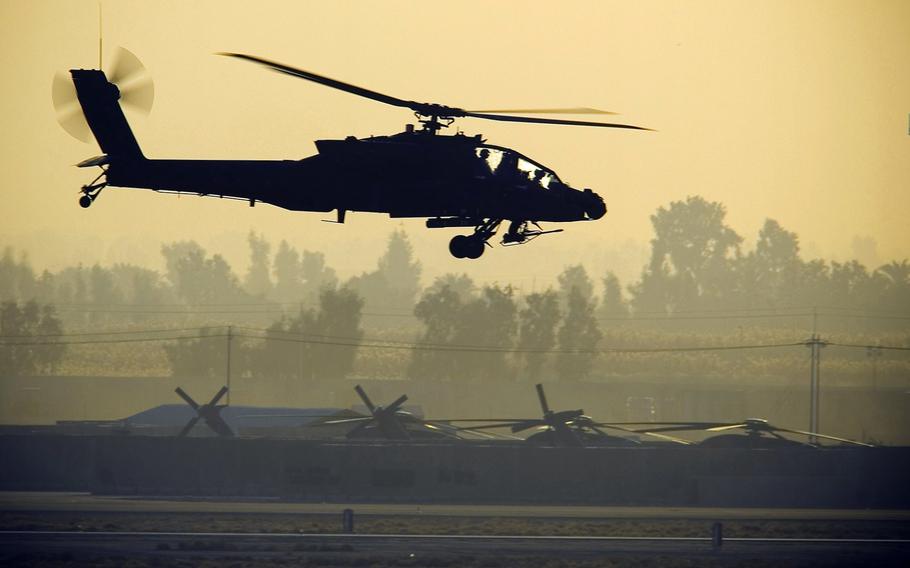 WASHINGTON — A resurgence of militants in Iraq and the chaos they are creating has gotten Washington’s attention.

Speaker of the House John Boehner, R-Ohio, urged the Obama administration Thursday to re-engage on the matter and emphasized the need to maintain a long-term commitment to securing U.S. interests in that nation.

“Precious blood was spilled, and national treasure was expended helping Iraqis remove a brutal dictator and repelling terrorist elements determined to stamp out human freedom and dignity,” Boehner said, in prepared remarks. “That progress is now threatened and, in the case of Fallujah, it’s been reversed. … The United States has, and will continue to have, vital national interests in Iraq. We must maintain a long-term commitment to a successful outcome there. And It’s time that the president recognize this, and get engaged.”

Boehner also lamented the full withdrawal of U.S. forces at the end of 2011.

“A status of forces agreement with Iraq should have been agreed to,” he said, “and this administration failed to deliver.”

Sen. Carl Levin, D-Mich., chairman of the Senate Armed Services Committee, noted that President George W. Bush signed the agreement with the Maliki government to withdrawal all U.S. troops by the end of 2011, after Iraq refused to grant immunity from the Iraqi courts.

“[T]he decision to reject an ongoing U.S. troop presence after 2011 was Iraq’s, because of Iraq’s refusal to assure our troops would have protections from Iraqi courts,” Levin said in remarks prepared for a late Thursday floor speech.

Levin also was to weigh on military assistance, which is gaining traction on the Hill, saying most assistance is appropriate with assurances that they would not be used against political enemies.

“The question is whether the Maliki government would use them only against violent extremists,” Levin said in prepared remarks, “and whether we receive credible assurances that such weapons will be used to target Iraq’s real enemies, and not to further sectarian political objectives. With credible assurances, it would be appropriate to provide such assistance.”

On Wednesday, a powerful Senate Democrat has signaled that he might allow the transfer of AH-64 Apache helicopters to Iraq as the government in Baghdad struggles to recapture key territory seized by Islamic extremists, The New York Times reported.

Sen. Bob Menendez of New Jersey, the chairman of the Foreign Relations Committee, has blocked the lease and sale of the powerful attack helicopters for months, the Times wrote. He is seeking assurances that Iraq would not use them to attack civilians, and that the government in Baghdad would take steps to stop Iran from using Iraqi airspace to ship arms to Syria’s military.

Menendez received a three-page letter last week from Prime Minister Nouri al-Maliki of Iraq responding to his concerns and received an urgent call Tuesday from the State Department promising a further response, according to the report.

The Obama administration has proposed selling up to 30 of the helicopters to the Iraqis, but, because building them could take years, it has also asked to lease up to 10 aircraft in the interim, the Times noted. Administration officials said the Apaches could be useful in targeting fighters affiliated with al Qaida like those who have taken over parts of Fallujah and Ramadi. But even if Menendez dropped his objections, it could take until April to deliver them, and officials noted that pilots would still need to be trained.

The Times also wrote that the administration also is planning to ship more Hellfire missiles as early as this spring, 10 ScanEagle surveillance drones in coming weeks and 48 Raven surveillance drones later in the year. Those come on top of Aerostat surveillance balloons provided in September and three additional Bell IA-407 helicopters sent last month.