US citizen fighting for ISIS captured, turned over to DOD 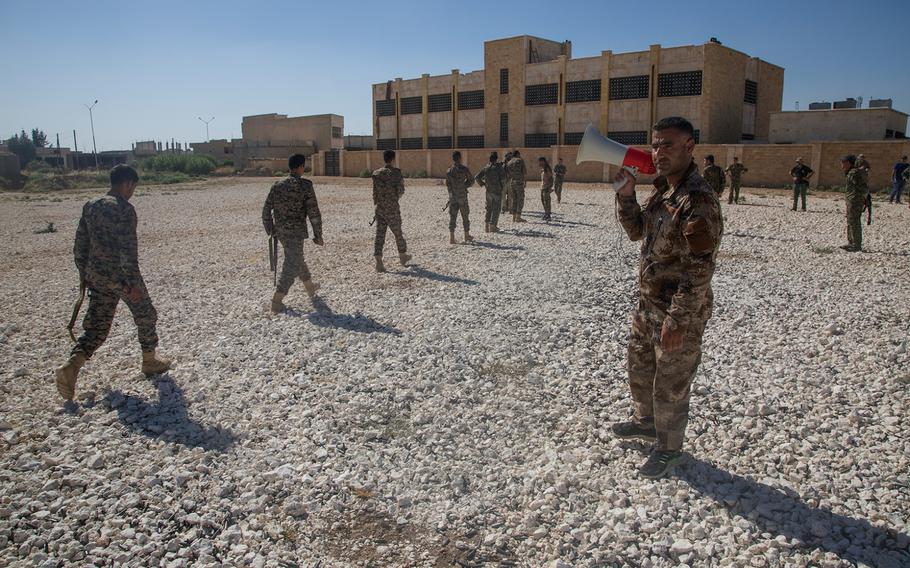 Trainees file off a rifle range after completing an iteration of rifle marksmanship training with the Syrian Democratic Forces in northern Syria on July 31, 2017. An American citizen who had been fighting for the Islamic State, surrendered to the U.S.-backed Syrian Democratic Forces in eastern Syria on or about Sept. 12 and was transferred to U.S. military custody. (Mitchell Ryan/U.S. Army)

WASHINGTON — The U.S. military has detained an American captured in Syria fighting for the Islamic State, the Pentagon said Thursday.

The American citizen surrendered to U.S.-backed Syrian Democratic Forces in eastern Syria on or about Sept. 12 and was transferred to U.S. military custody, said Marine Maj. Adrian Rankine-Galloway, a Pentagon spokesman said.

“The U.S. citizen is being legally detained by Department of Defense personnel as a known enemy combatant,” he said. “…[ISIS] fighters who are captured are safe guarded and treated humanely.”

Enemy fighters on the battlefield will be killed or captured regardless of their citizenship, he added.

Rankine-Galloway declined to say exactly where the fighter was captured in Syria or where he was being held, citing operational security concerns.

Syrian Democratic Forces – an umbrella group that includes some 50,000 Kurdish and Arab anti-ISIS fighters in northern and eastern Syria – are conducting combat operations now in the former ISIS capital of Raqqa and in the Middle Euphrates River Valley north of Deir el-Zour, a small city where officials believe much of the terrorist group’s leadership fled before Raqqa was invaded.

The U.S. military has provided weapons, training, special operations advisers and air and artillery power to the SDF as the group has pushed ISIS out of more than half its territory in Syria during the last two years.

The American ISIS fighter, whose name was not released, will be turned over to the Justice Department for prosecution, Rankine-Galloway said.

A spokeswoman for the Department of Justice did not have an immediate comment when reached by phone Thursday.

It is not the first time an American has been accused of fighting for ISIS.

In June, Mohamad Jamal Khweis, 27, was convicted in federal court of providing material support to ISIS. The Justice Department said Khweis traveled to Syria through Turkey to join ISIS in December 2015 and spent about 2 1/2 months traveling with ISIS fighters and undergoing religious training.

Khweis lived in Alexandria, Virginia, and was captured by Kurdish peshmerga forces near Tal Afar in northern Iraq in March 2016.

He is scheduled to be sentenced Oct. 13 and faces a minimum penalty of five years in prison and a maximum penalty of life in prison, according to the Justice Department.