US, China roles in Asia-Pacific security to top multinational summit 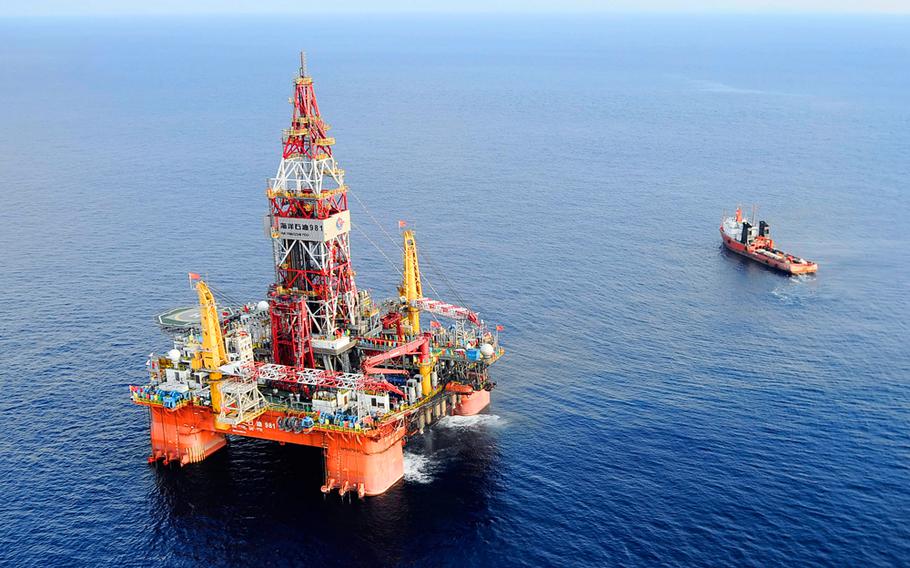 A deep-water drilling rig developed in China lies 200 miles southeast of Hong Kong in the South China Sea on May 7, 2012. Vietnam warned China on May 6, 2014, that it would take all necessary measures to defend its interests in the South China Sea if Beijing does not remove the large oil rig from waters claimed by both countries. (Jin Liangkuai, Xinhua/AP)

TOKYO — During the past week, a Vietnamese ship sank, Chinese fighter planes buzzed their Japanese counterparts and Thailand staged a military coup.

Suffice it to say, there will be some tension this weekend in Singapore, as each of those nations, as well as the United States, bring a slew of high-level diplomats and security officials to the 27-nation Shangri-La Dialogue.

The dialogue, which began in 2002, has rapidly become one of the most influential summits of its kind, headlined by regional prime ministers and regularly attended by U.S. defense secretaries.

Much of the conversation will center on China’s vision of Asia — a future where China seems set on regulating or controlling large swaths of the western Pacific Ocean — versus the opposing visions supported by the United States and the many other countries that border those waters.

“Over the last 12 months, there’s been a decline in regional security,” said Shangri-La Dialogue senior fellow Alexander Neill. “There are trust deficits in bilateral relationships. Underlying all of this is the rivalry between the rising power of China and the resident superpower, the United States.”

Defense Secretary Chuck Hagel and other U.S. officials are expected to engage in sideline discussions with several nations focused on skirmishes with China.

Vietnam’s relationship with China hit another low Tuesday when it accused a Chinese ship of sinking one of its fishing vessels near the Paracel Islands, a South China Sea territory claimed by both nations. In response, China accused Vietnam’s ship of running into its ship and capsizing.

The U.S. military-to-military relationship with Vietnam has grown since the two nations began limited bilateral exercises in 2010, and Navy officials told Stars and Stripes this month that they hope to expand the scope of those exercises next year.

Vietnam has ruled out basing U.S. foreign troops within its borders. However, Vietnam and Southeast Asia will likely be a target of “heavy military diplomacy” from the U.S. in the next few years, Neill said.

“I could envision enhanced port visits, and perhaps rotational visits could be made with Vietnam,” Neill said.

The United States has largely sided with Vietnam in its standoff with China, after the Chinese moved a $1 billion offshore oil-drilling rig toward the Paracels earlier in May, raising tensions between the two countries.

“We remain concerned about dangerous conduct and intimidation by vessels operating in this area by the Chinese,” State Department spokeswoman Jen Psaki said Tuesday in Washington.

Japanese Prime Minister Shinzo Abe also criticized China’s “unilateral drilling activity” at a meeting with Vietnam officials in Tokyo on May 22. A few days later, Japanese officials said that Chinese fighter planes flew within 100 feet of their surveillance planes near the Senkaku Islands, which Japan administers but China also claims.

China lashed out at Abe’s support for Vietnam on Tuesday.

“The [Japanese] want to fish in the troubled waters and achieve their ulterior motives,” China Foreign Ministry spokesman Qin Gang said during a news conference. “They want nothing short of chaos.”

On Friday night, Abe will give the keynote address at the Shangri-La Dialogue, in front of China’s largest-ever delegation at the meeting, organizers said.

Japanese officials are also expected to meet with South Korean and U.S. officials to discuss placing an advanced missile-defense system in South Korea, according to a Wall Street Journal report.

The U.S. has already conducted a site survey for a Terminal High-Altitude Area Defense Battery, which would be placed to counter North Korean missile launches. No final decisions have been made, according to the report.

The most prominent discussions at Shangri-La not involving China or North Korea will likely center around Thailand, where the military has overthrown the civilian government and suppressed dissent.