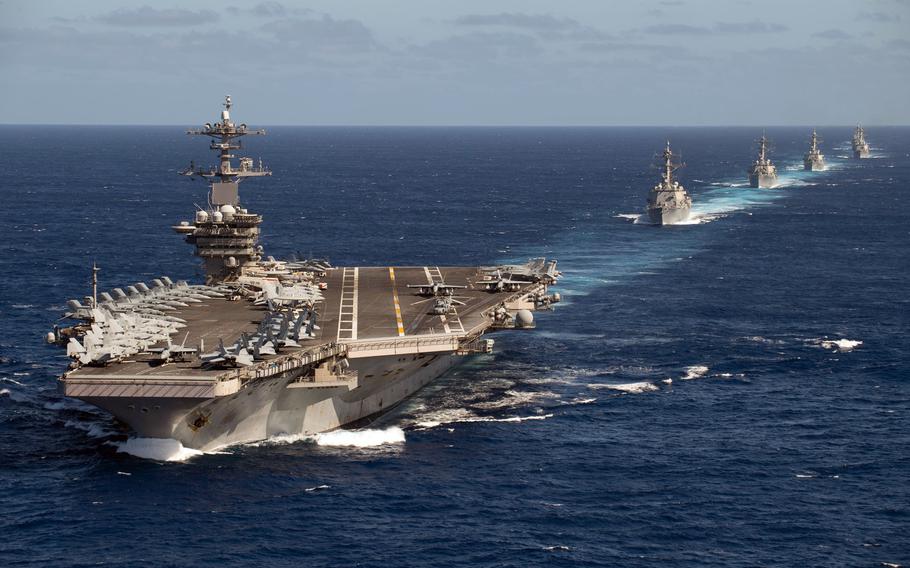 The Theodore Roosevelt Carrier Strike Group transits the Pacific Ocean in formation Jan. 25, 2020. Global military spending increased by the largest amount in a decade last year, according to a new report that shows the U.S. and China leading the way. (Anthony Rivera/U.S. Navy)

STUTTGART, Germany — Annual military spending climbed worldwide in 2019 by the largest amount in a decade, with the U.S. far outpacing second-place China, a new study has found.

Global defense spending rose by 4% in 2019 compared to the previous year, a report released last week by the International Institute for Strategic Studies said.

Washington and Beijing both increased their military spending by 6.6%, the study said, but while the pace of growth in China “is decelerating, in line with Beijing’s relative economic slowdown,” the U.S. has seen military spending increases each year since Donald Trump took office in 2017.

“The US spends almost three times as much as China,” the report says. “This meant that in 2019 U.S. defense investments alone were larger than China’s total defense budget.”

Saudi Arabia, Russia and India rounded out the top five in military spending.

In Europe, defense spending increased by 4.2% last year compared with 2018, reaching levels not seen since before the 2008 financial crisis, IISS said.

Leading the way in European spending was Germany, which has faced criticism from the U.S. for falling short of NATO guidelines that call for 2% of gross domestic product to be dedicated to military spending.

“U.S. exhortations to spend more have combined with changing threat perceptions in European states to bring about larger defense budgets,” the report said.

But although German military spending increased by 9.7% between 2018 and 2019, accounting for a third of military spending growth in Europe, it still spent only around 1.3% of GDP on defense, falling short of the NATO benchmark, the report said.

Defense spending also soared in Asia, climbing by more than 50% in the last decade, the report said.

“This figure is a result of Asian countries’ economic success in recent years, which has allowed them to invest more in their military capabilities,” IISS said.

On a per capita basis, countries in the Middle East and North Africa region were in five of the top 10 military spending positions, with Oman spending more than $2,500 per person and Saudi Arabia more than $2,300 per person on defense, the report said.