US brands new terror group a top threat in Africa 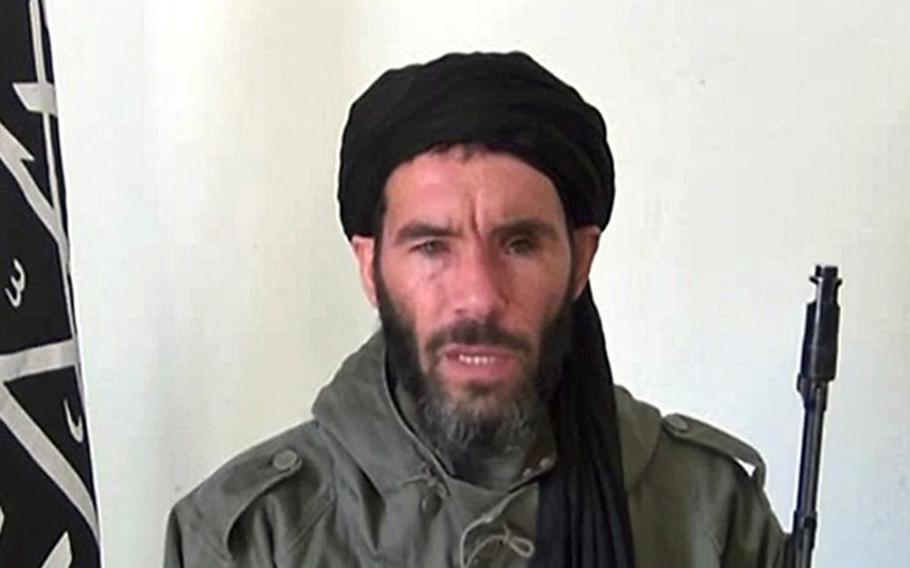 Mokhtar Belmokhtar, reportedly shown here in a video obtained by Mauritanian news agency ANI, has become a symbol of how the United States bungled an ambitious, long-term strategy to prevent al-Qaeda from gaining a foothold in North and West Africa. (AFP/Getty Images)

STUTTGART, Germany — A new terror group led by the one-eyed Algerian insurgent known as “Mr. Marlboro” has been formally branded a terrorist organization by the U.S. State Department, which is calling the band of militants a top threat to Western interests in the region.

U.S. officials on Wednesday announced the new designation for the al-Mulathamun Battalion, which in late 2012 broke off from the more prominent al-Qaida in the Islamic Maghreb.

The group, led by Mokhtar Belmokhtar, is now judged by U.S. officials to be among the most dangerous operating across North and West Africa. After Belmokhtar’s split with AQIM, he announced that his prime focus would be “to fight against Western interests,” the State Department said Wednesday.

Belmokhtar then formed a unit called “Those Who Sign in Blood,” which was believed to be a squad of Belmokhtar’s best fighters. The group claimed responsibility for the January 2013 attack on a gas facility in Algeria that left at least 38 civilians dead. Three U.S. citizens were among the victims.

Belmokhtar’s group, along with militias stretching into Mali and Nigeria, are believed to have armed themselves with weaponry that spilled out of Libya following the NATO campaign to help rebel fighters topple strongman Moammar Gadhafi. Militants plundered government arms depots hit by NATO jets and eventually smuggled the weapons — which included sophisticated items such as shoulder-fired anti-aircraft missiles — as far away as Syria and Yemen, experts say.

Belmokhtar has been among the most elusive of terrorists, having been declared dead on numerous occasions. Those claims have repeatedly been proven false. The most recent claim came in March when the Chadian military announced on state television that its troops deployed in northern Mali had killed Belmokhtar.

Known as Mr. Marlboro for his years of cigarette smuggling in the border regions of the Sahara Desert, U.S. officials say his al-Mulathamun Battalion has been collaborating with other terrorist groups in the region, resulting in attacks such as a twin suicide bombings in Niger, which killed at least 20 people. In August 2013, the al-Mulathamun Battalion and Movement for Unity and Jihad in West Africa announced that the two organizations would merge under the name “al-Murabitoun.”

“The newly formed al-Murabitoun extremist group constitutes the greatest near-term threat to U.S. and Western interests in the Sahel,” the State Department said.

Al-Murabitoun and the “Those Who Sign in Blood” battalion are regarded by U.S. officials as aliases of the al-Mulathamun Battalion. As a result, the new terrorist designation applies to all the groups, the State Department said.