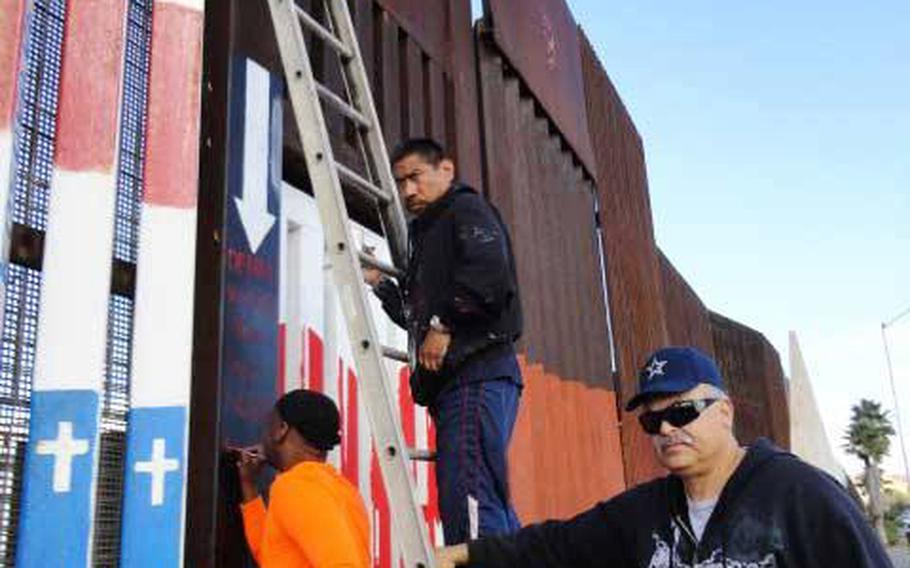 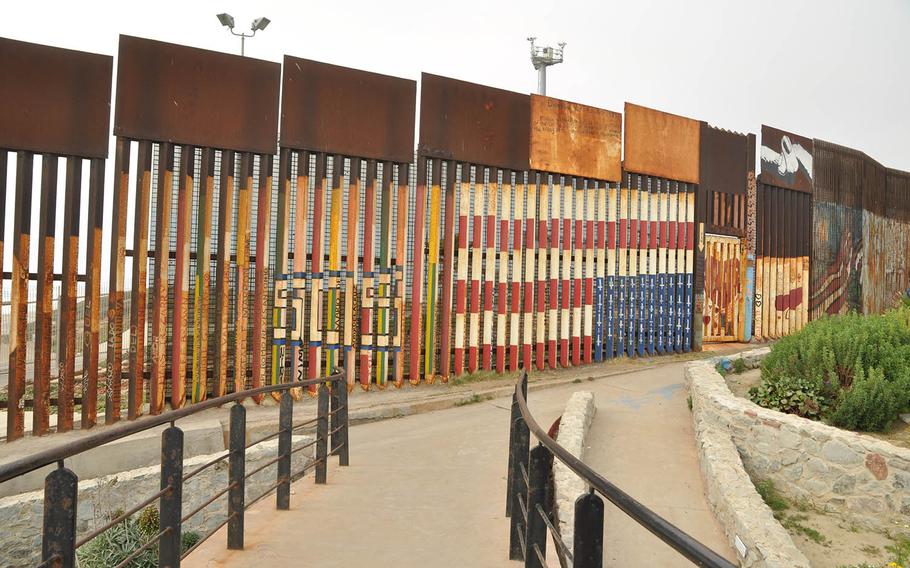 An upside-down American flag - a national distress signal - is painted on the south side of the US-Mexico border wall near San Diego as a symbol for the plight of deported veterans. Hector Lopez, a deported veteran in Tijuana who helped paint the mural, said U.S. Border Patrol called him in April and ordered him to remove it. (Dianna Cahn/Stars and Stripes) 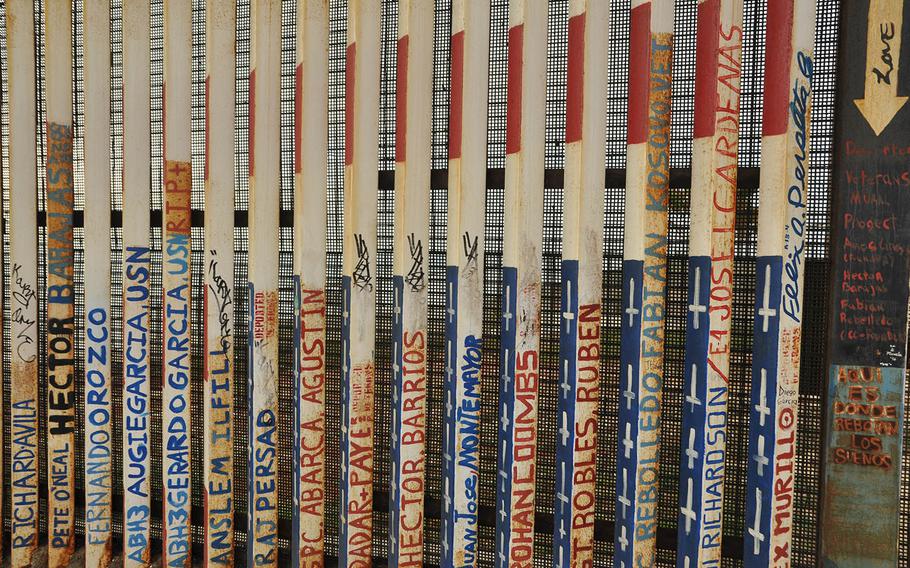 WASHINGTON — Navy veteran Amos Gregory, a muralist working in San Francisco, was inspired in 2013 to paint an upside-down flag on the border wall dividing San Diego and Tijuana — a distress signal that Gregory described as the perfect symbol to represent the plight of deported veterans.

Over the years, the mural has become a backdrop for their fight to return to the U.S.

Nearly five years after Gregory, 48, and a group of deported veterans finished the mural, U.S. Border Patrol has taken renewed interest in it. The agency is taking stock of paintings on the border wall because of complaints from the public about “graffiti,” said William Rogers, the supervisory border patrol agent in San Diego.

A few weeks back, the chief patrol agent for Border Patrol’s San Diego office called a group of deported veterans in Tijuana, named the Unified U.S. Deported Veterans, and Hector Lopez answered the phone. Lopez, 54, is one of the veterans who helped paint the mural with Gregory.

“He told me that it was U.S. government property and that we need to either cover it up or paint [the flag] the right way,” Lopez said. “And if we didn’t do it, then they would come across and do it themselves.”

Based on that phone call, Gregory believes Border Patrol is specifically targeting the mural of the American flag.

“There’s a focus on that particular mural and the message,” Gregory said.

However, Rogers said the agent contacted Lopez and artists who worked on other murals to “offer them a voice” before the chief patrol agent decides whether to remove the paintings.

The murals were painted on the Mexico side of the border near Friendship Park, where friends and family members from opposite sides of the border often gather to talk through a mesh-linked fence. The area is under enforcement of the U.S. Border Patrol.

“The Chief Patrol Agent for San Diego Sector decided to reach out to the groups and artists that created these murals and engage them in conversation before making any final decision on remediation or preservation,” Rogers said in a statement. “Part of this process is simply trying to figure out what is truly graffiti and what should be classified as an intentional mural.

“It is also important to understand that this is U.S. government property and that all of the graffiti and/or paintings were applied without permission,” he said.

Rogers did not offer a time frame for when the Border Patrol would decide whether to remove any murals.

Gregory criticized the agency’s interest in the paintings.

“When did Border Patrol get in the business of curating artwork?” he said.

The timing of the call from Border Patrol and its review is bewildering and disheartening, Gregory said.

In mid-April, one of the veterans who helped paint the American flag mural rocketed to national prominence when he obtained U.S. citizenship 14 years after he was deported to Mexico. Hector Barajas-Varela, 40, became the first known deported veteran to be naturalized as a U.S. citizen.

In 2016, a photo of Barajas-Varela standing in front of the mural was used as the cover for “Discharged, Then Discarded,” a report from the American Civil Liberties Union about deported veterans. Stars and Stripes profiled Barajas-Varela in 2016.

“Here’s this uplifting moment for deported veterans worldwide, and then this symbol, they call about taking it down just before?” Gregory said. “That really sucks.”

According to the Congressional Hispanic Caucus, there are about 3,000 cases of veterans being deported to countries around the world, though it’s difficult to know an exact number because the U.S. government doesn’t specifically track them.

Noncitizens who serve in the U.S. military are granted the right to citizenship, but they must apply for it — a requirement some advocates and lawmakers believe isn’t made clear to servicemembers. Veterans who haven’t attained citizenship can be deported if they are convicted of certain infractions, including drug crimes, domestic violence and voter fraud.

Some lawmakers have been working to secure more rights for noncitizens who serve in the military and grant access to VA services for those already deported. Next week, Barajas-Varela is expected to be part of a forum about deported veterans on Capitol Hill.

To Gregory, Border Patrol’s scrutiny of his mural sends a deeper message about how the government views deported veterans.

“That symbol will change when the situation for deported veterans changes,” Gregory said. “Until they’re not in distress, it will be the symbol.”