US bombing Tikrit, but only after Iran-backed militia pulled back 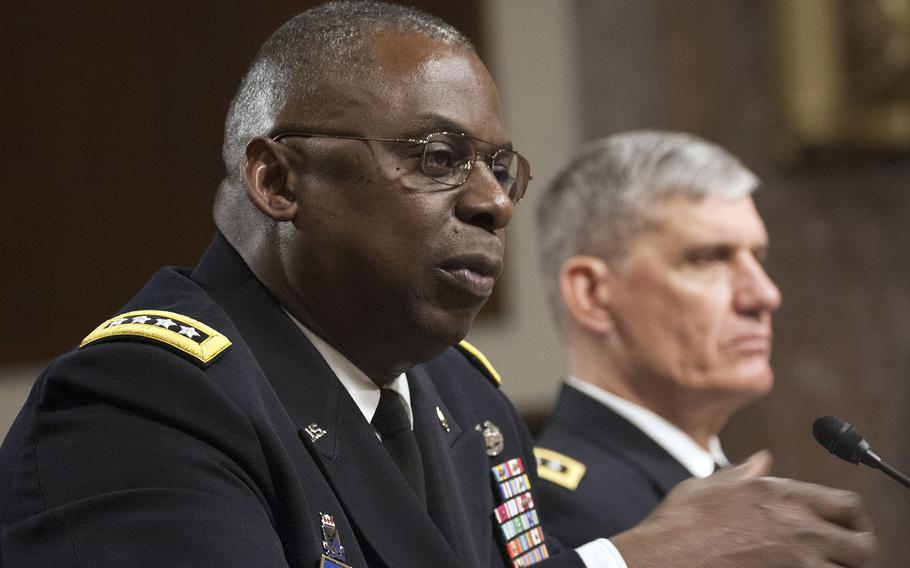 Gen. Lloyd J. Austin, commander of the U.S. Central Command, answers a question during a Senate Armed Services Committee budget hearing Thursday, March 26, 2015, in Washington. Next to him is AFRICOM commander Gen. David M. Rodriguez. Austin told lawmakers that there were a number of preconditions that had to be met before the U.S.-led coalition would come to the rescue of the stalled offensive in Tikrit. (Joe Gromelski/Stars and Stripes)

WASHINGTON — The top U.S. commander in the Middle East testified Thursday that U.S. aircraft only began bombing militants in Tikrit after Iran-backed militias withdrew from the fight.

U.S. Army Gen. Lloyd Austin, commander of U.S. Central Command, told lawmakers that there were a number of preconditions that had to be met before the U.S.-led coalition would come to the rescue of the stalled offensive.

“Once those conditions were met, which included Shiite militias not being involved [in the operation], then we were able to proceed,” he said. After “three tours in Iraq commanding [U.S.] troops who were brutalized by some of these Shiite militias, I will not and I hope we never coordinate or cooperate with Shiite militias.”

The U.S.-led international coalition began airstrikes Wednesday, and Iraqi troops have launched the final phase of an offensive to recapture the city, according to coalition officials.

The strikes were requested by Iraqi Prime Minister Haider al-Abadi and approved by the Ministry of Defense, according to U.S. and coalition officials.

“The United States is deeply involved in this operation now,” retired Gen. John Allen, the special presidential envoy for the counter-ISIL coalition, told lawmakers Thursday. “The intent, of course, is … the liberation of a not- insignificant urban center and population center with the idea ultimately of driving [the Islamic State] out of the province of Salah ad-Din.”

Iranian military advisers have been providing significant support since the Tikrit offensive began March 2, arming and training Iraqi Shiite militias, which have played a prominent role on the battlefield. Militiamen made up more than two-thirds of the force fighting the Islamic State group in Tikrit.

Although they may not be directly involved in the clearing operation, Pentagon spokesman Col. Steve Warren told reporters Thursday that Shiite militiamen are helping Iraqi troops encircle Tikrit while the city is cleared by government forces.

Some U.S. officials have a less hostile view of Shiite militias than Austin.

“Not every Shiite militia unit is Iranian backed,” Warren said. “Certainly the [Popular Mobilization Committee] is paid by the Iraqi government. They have a presence inside [the combined joint operations center]. They have a seat at the table. They are recognized by both the Iraqis and by the coalition as a legitimate piece of the Iraqi security force establishment.”

Allen also urged against painting all Shiite militia with the same brush.

“They are not [all like] Hezbollah with the close ties to Iran,” he told lawmakers. “And I think we need to be very nuanced in how we look at them because… they came to defend their country.”

Aside from the militia problem, other issues had to be worked out as well before the U.S. agreed to help with the Tikrit operation.

The CENTCOM commander said the Iraqi forces and militias were ill-prepared for the fight when they first launched their attack on Tikrit earlier this month.

“They didn’t have a coherent scheme of maneuver, [or] command and control,” he told members of the Senate Armed Services Committee. “They didn’t have precision fires to support this effort. And so trying to go about the difficult task of clearing a place like Tikrit without that caused them to stall.”

“It’s within the Iraqi interest and the coalition’s interest to be successful in Tikrit, because we don’t want to have another success for … ISIL,” he told lawmakers. “We’re in a position that we can provide that support to be successful.”

In an address late Wednesday, al-Abadi said Iraqi forces began the “final phase” in the Tikrit offensive but did not acknowledge that coalition forces were playing a direct role. He said Iraqis, “and not anyone but you,” will claim victory against the militant group.

Associated Press writers Vivian Salama in Baghdad and Robert Burns in Washington contributed to this report.