US bombing in Libya intensifies 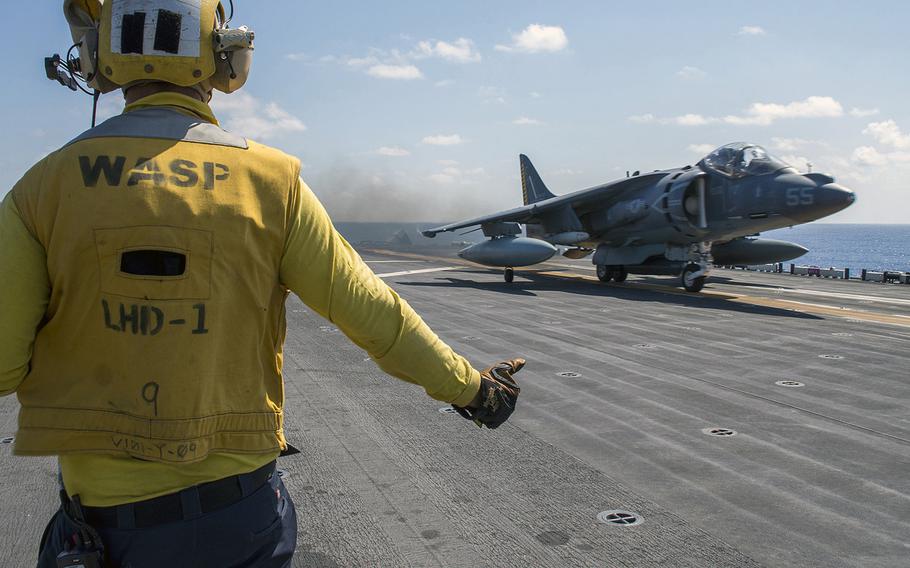 An AV-8B Harrier, from the 22nd Marine Expeditionary Unit, takes off from the flight deck of the amphibious assault ship USS Wasp in the Mediterranean Sea, Wednesday, Sept. 28, 2016. The 22nd MEU, embarked on Wasp, is conducting precision air strikes in support of the Libyan Government of National Accord-aligned forces against Islamic State targets in Sirte, Libya. (Michael Molina/U.S. Navy)

STUTTGART, Germany — U.S. warplanes bombarded Islamic State group targets Sunday in Libya, knocking out a command and control facility, nearly 70 enemy fighting positions and several other sites in what was the heaviest day of bombing since the two-month-old operation began, according to U.S. Africa Command data.

In all, 20 airstrikes were launched Sunday as the Operation Odyssey Lightening campaign in Libya headed into its third month, bringing the total number of strikes to 201.

AFRICOM is targeting an increasingly small area in the coastal city of Sirte, which is the focus of the U.S. mission in Libya. The airstrikes are in support of an offensive by ground forces aligned with the internationally backed Libyan government.

A few months ago, Islamic State fighters were in control of large parts of the city, where several thousand fighters were holed up. Since the offensive, those numbers are estimated to be about 200, according to the U.S. military.

AFRICOM began its mission in Libya on Aug. 1. It has involved airstrikes by jets operating from the USS Wasp, positioned off the Libyan coast, together with occasional assaults from Marine attack helicopters.

During the month of August, 108 strikes were launched. The pace of operations slowed slightly in September, with a total of 80 strikes.

October, however, has started at a rapid pace, with one strike on Saturday followed by 20 on Sunday. Besides hitting enemy fighting positions and a command and control facility, an operational facility and a site for making car bombs were eliminated, according to AFRICOM’s strike report.

After Moammar Gadhafi was toppled in 2011, Libya plunged into chaos, with rival militias battling for territory and a fragile national government struggling to assert itself and achieve unity.

Many of those militias sprouted up as local defense forces during the Arab Spring uprising against Gadhafi. After the uprising succeeded, the militias refused to hand over weapons and flourished in the chaos.

The Islamic State group has also sought to exploit the chaos in Libya to build a sanctuary in the oil-rich country, which is awash in weaponry and only 300 miles across the Mediterranean from Europe.

The U.S. decision to conduct strikes in Libya came after months of deliberations and a formal request for support from the Libyan government.