US bombers, jets fly near N. Korean border in show of force after missile test 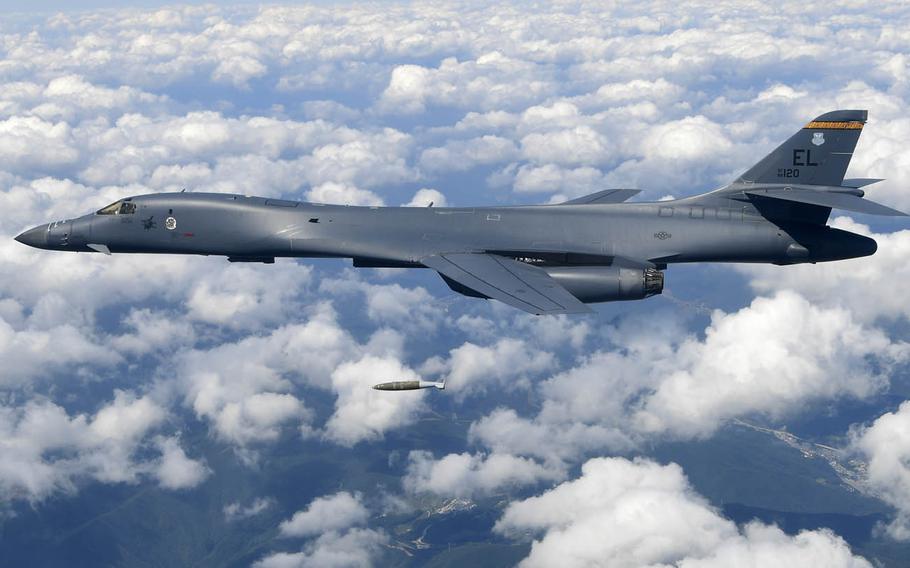 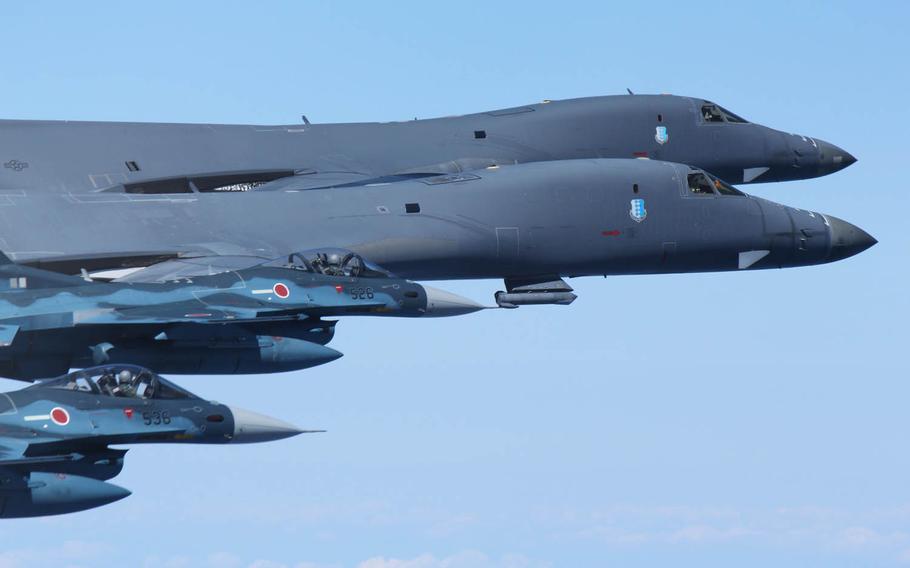 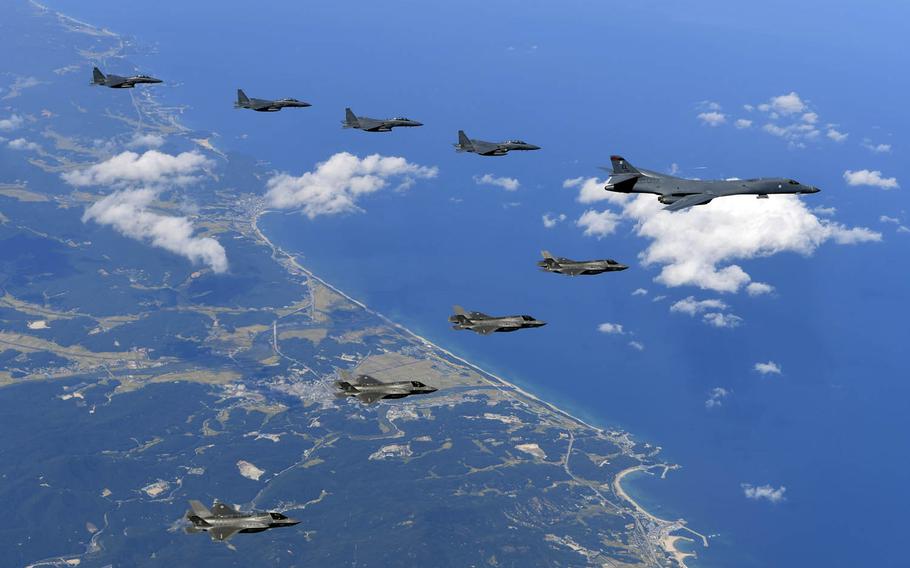 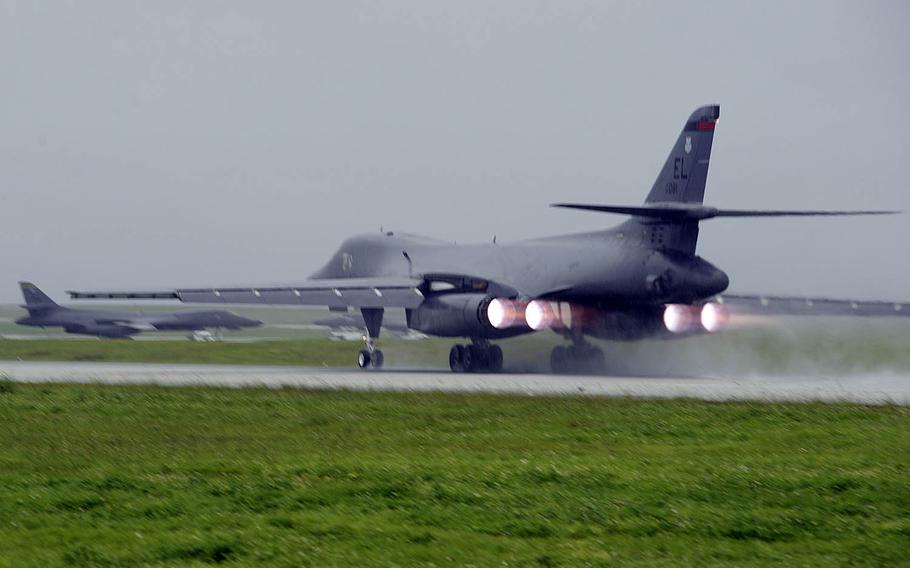 SEOUL, South Korea — U.S. supersonic bombers and stealth jets flew near the border with North Korea on Monday, officials said, in a show of force after a senior American diplomat warned the communist state it could face military action if it persists with its nuclear weapons program.

In what has become a familiar pattern, two B-1B Lancers and four state-of-the-art F-35B stealth fighter jets were joined by South Korean fighters in conducting a bombing drill on the divided peninsula, three days after the North test-fired a missile that flew over Japan.

The Guam-based Air Force bombers and Japan-based Marine fighter jets flew in a sequenced “bilateral show of force” in response to Friday’s missile test, according to a U.S. Pacific Command statement.

The U.S. and South Korean aircraft released live weapons at the Pilsung Range training area in South Korea, it said, adding that the U.S. and Japanese planes flew together over waters near Kyushu, Japan.

The Hawaii-based command said it “maintains the ability to respond to any threat in the Indo-Asia-Pacific theater at a moment’s notice.”

A South Korean defense official, who provided more details on condition of anonymity, said the U.S. aircraft flew near the tense military demarcation line that separates the countries in what he said was a rare maneuver.

The United States and its allies have shown increasing impatience with North Korea, which has consistently defied diplomatic pressure and punishing U.N. sanctions aimed at forcing it to curb its nuclear ambitions.

The issue is expected to top the agenda at this week’s U.N. General Assembly. President Donald Trump, who is scheduled to address the 193-member body for the first time on Tuesday, dubbed North Korea’s leader “Rocket Man” in a tweet over the weekend.

However, they fell short of a full embargo proposed by Washington due to opposition from China and Russia, which have refused to sign on to any resolution that threatened to cripple the North Korean regime.

The communist state has so far overcome all efforts to stanch its progress toward its stated goal of developing a nuclear-tipped missile that could target the U.S. mainland. It has conducted 14 missile tests this year and carried out its sixth and most powerful nuclear test on Sept. 3.

The missile launched Friday flew about 2,300 miles before crashing into the Pacific east of Cape Erimo, the longest distance yet achieved by a North Korean ballistic missile.

U.S. Ambassador to the U.N. Nikki Haley said the sanctions need time to work and maintained hope that Pyongyang would return to the negotiating table.

But Haley suggested patience was wearing thin and said she would be happy to hand the matter over to Defense Secretary Jim Mattis who she said has “plenty of military options.”

“We have pretty much exhausted all the things that we can do at the Security Council at this point,” Haley told CNN’s “State of the Union” on Sunday.

The U.S. has frequently deployed the Lancers to the peninsula after North Korean tests, but it sent the F-35s from Marine Corps Air Station Iwakuni for the first time on Aug. 31 after another missile was lobbed over the Japanese island of Hokkaido.

The South Korean official said Monday’s flight was the first time the Marine jets flew so close to the North Korean border.

Trump, who spent the weekend at his New Jersey golf club, gave the North Korean leader a nickname in a tweet about his latest phone call with South Korean President Moon Jae-in.

“I spoke with President Moon of South Korea last night. Asked him how Rocket Man is doing. Long gas lines forming in North Korea. Too bad!” he wrote.

It was unclear where the assertion about gas lines came from. The Associated Press reported in April that an acute shortage of gasoline had raised prices and prompted hoarding. But The Washington Post on Monday quoted foreign residents in Pyongyang as saying they had seen no such lines and traffic appeared to be normal.

North and South Korea remain technically at war after their 1950-53 conflict ended in an armistice instead of a peace treaty. The U.S. maintains about 28,500 servicemembers in the South.