A team from MAKRI, the South Korean agency for recovering soldiers' remains, found artifacts and remains from the Korean War at a DMZ site excavated in spring 2019. (Courtesy South Korean Defense Ministry)

A team from MAKRI, the South Korean agency for recovering soldiers' remains, found artifacts and remains from the Korean War at a DMZ site excavated in spring 2019. (Courtesy South Korean Defense Ministry) 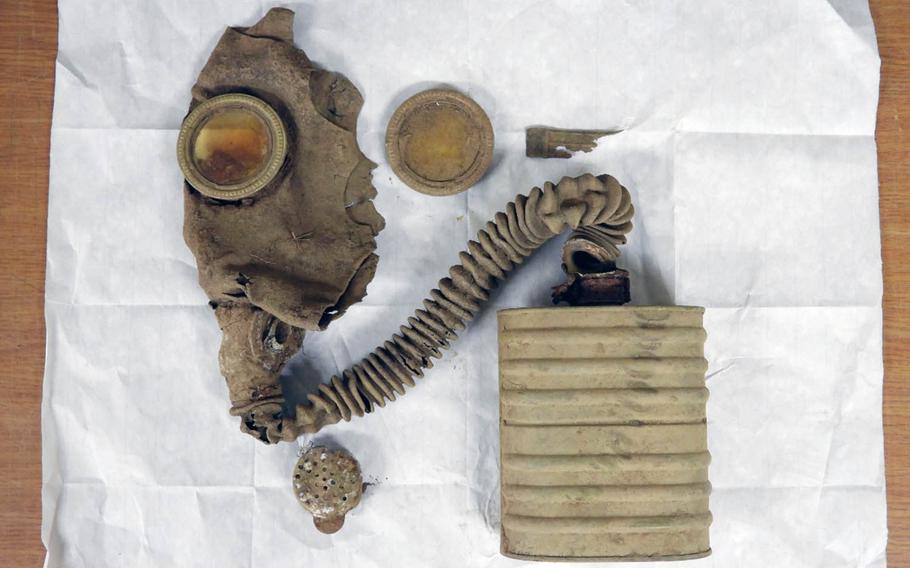 A gas mask, believed to be of Chinese origin, was discovered at a site in the DMZ during a search for remains of Korean War soldiers in spring 2019. (Courtesy South Korean Defense Ministry) 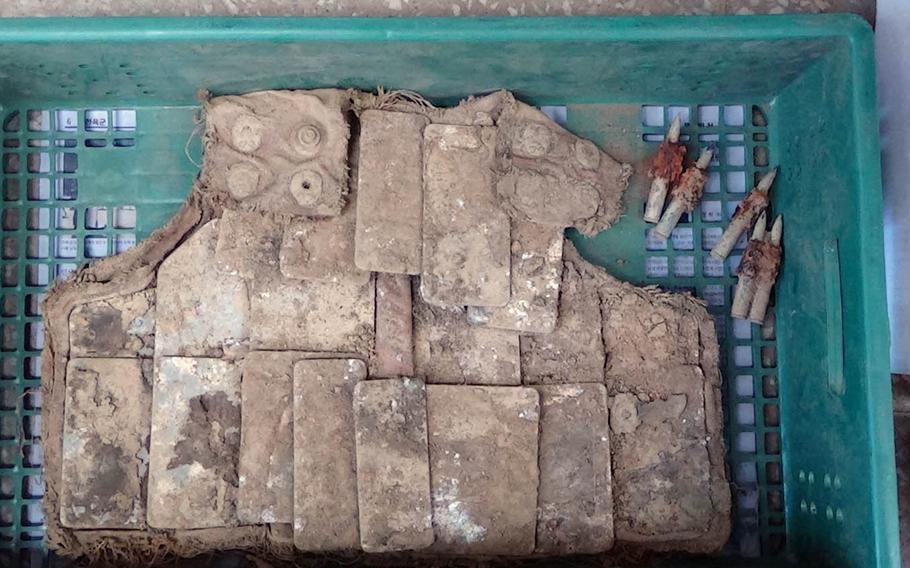 Body armor that apparently belonged to an American soldier during the Korean War was found at a site in the DMZ during a search in spring 2019. (Courtesy South Korean Defense Ministry)

SEOUL, South Korea — Body armor that belonged to American soldiers along with Chinese gas masks were unearthed with the remains of Korean War dead in the heavily fortified border area that divides the peninsula, the defense ministry said Thursday.

Search teams have found 321 bone fragments and nearly 23,000 items from soldiers who died during fierce battles in what would later become the Demilitarized Zone since April 1, according to a press release.

The Pentagon announced earlier this month that it had given up hope on resuming joint U.S.-North Korean searches for remains this year amid a diplomatic stalemate over efforts to persuade Pyongyang to give up its nuclear weapons.

But South Korea has pushed forward with efforts to recover the remains of troops killed in the DMZ during the 1950-53 war, which ended with an armistice instead of a peace treaty.

The search area known as Arrowhead Ridge, or Hill 281, was the site of fierce battles as American, French and South Korean soldiers fought to repel Chinese forces trying to invade from the North. But it has long been in the no-go buffer zone that has been lined with barbed wire and land mines since the war ended.

In the fall, the two Koreas began removing land mines to allow searches for remains in the area as part of efforts to improve bilateral relations in parallel with U.S.-North Korean nuclear talks, which have deadlocked.

Seoul unilaterally resumed excavations on April 1, finding five pieces of U.S. military body armor, 14 Chinese gas masks and a dog tag belonging to a French soldier, the ministry said, releasing a photo of what appears to be an American soldier’s bulletproof vest.

Search crews with the defense ministry’s agency for killed in action recovery and identification, known as MAKRI, found 101 bone fragments this week, bringing the total to 321, it said. Officials said the number of people found has yet to be determined, pending DNA analysis.

More than 7,600 American troops remain missing from the war, with 5,300 believed lost in the North, according to the Defense POW/MIA Accounting Agency. More than 133,000 South Koreans are still unaccounted for, officials have said.

Hopes were raised last year when North Korea returned 55 cases of remains as part of a commitment to do so that was reached by President Donald Trump and North Korean leader Kim Jong Un during their first summit on June 12 in Singapore.

Three American service members have been identified from those remains so far.

U.S. officials sought to extend that agreement to joint searches in the North, but the accounting agency said on May 8 that it had not heard from the North Koreans since a second summit between Trump and Kim ended with no agreement in late February.

That left the agency with insufficient time to “plan, coordinate, and conduct field operations” in the North this year, spokesman Lt. Col. Kenneth Hoffman said in a statement.

The United States found hundreds of servicemembers during joint searches in North Korea from 1996 to 2005, but those were suspended amid rising tensions.