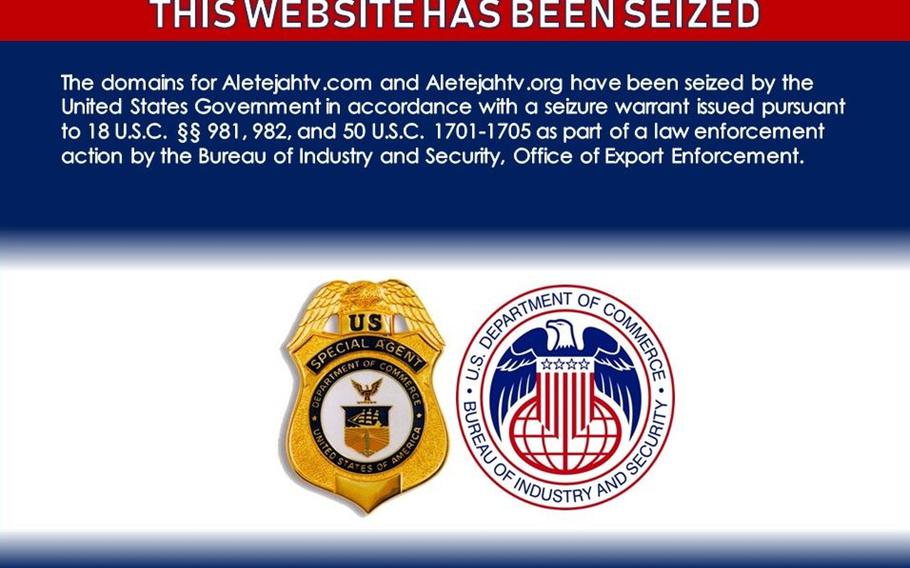 Visitors to Aletejahtv.com and Aletejahtv.org see this message since Aug. 31, 2020, when the U.S. government seized the two websites because of ties to an Iran-backed terror group linked to attacks on U.S. troops in Iraq and the storming of the U.S. Embassy in Baghdad in December 2019. (Capture from website)

The United States this week seized two websites run by an Iran-backed terror group linked to dozens of rocket attacks on U.S. troops in Iraq and the storming of the U.S. Embassy in Baghdad in December.

The sites, Aletejahtv.com and Aletejahtv.org, were the media arm of Shiite militia group Kataeb Hezbollah, which the U.S. designated a terrorist organization in 2009.

The group published videos, articles and photos on the sites to “push their message and recruit followers for their violent causes,” Assistant Attorney General for National Security John Demers said in a statement released Wednesday by the Justice Department.

After the sites were seized Monday, visitors were greeted with a message saying they had been taken down as part of a law enforcement action by a bureau within the Commerce Department. The sites were owned by an Arizona-based firm that allows website owners to stay private.

“We will not allow groups that have been rightfully prohibited from obtaining goods and services in the United States to use our internet services — especially to further their terrorist agenda,” said Byung J. Pak, U.S. attorney for the Northern District of Georgia.

The State and Treasury departments designated Kataeb Hezbollah for sanctions over a decade ago for threatening, attacking and killing coalition and Iraqi security forces and for committing or posing a risk of terrorist activities.

The group is separate from the Hezbollah group in Lebanon, which is also backed by Iran.

Groups with those designations are prohibited under federal law from acquiring or using goods and services in the U.S., including website and domain services, without a license, the statement said. Kataeb Hezbollah did not get a license prior to using the domain names, it said.

The sites were registered by Scottsdale, Ariz.-based GoDaddy.com and administered by Domains by Proxy, headquartered in the same Phoenix suburb, according to the nonprofit Internet Corporation for Assigned Names and Numbers, which manages the internet’s domain name system.

Domains by Proxy is affiliated with GoDaddy and allows website operators to register their sites while remaining anonymous.

The government statement did not implicate either firm in wrongdoing.

The websites were seized by the Bureau of Industry and Security’s Office of Export Enforcement, which is part of the Commerce Department.

The bureau “is committed to ensuring the stability of the Iraqi government and protecting our troops and Allied Forces against terrorist acts of violence,” commerce official P. Lee Smith said in the statement.