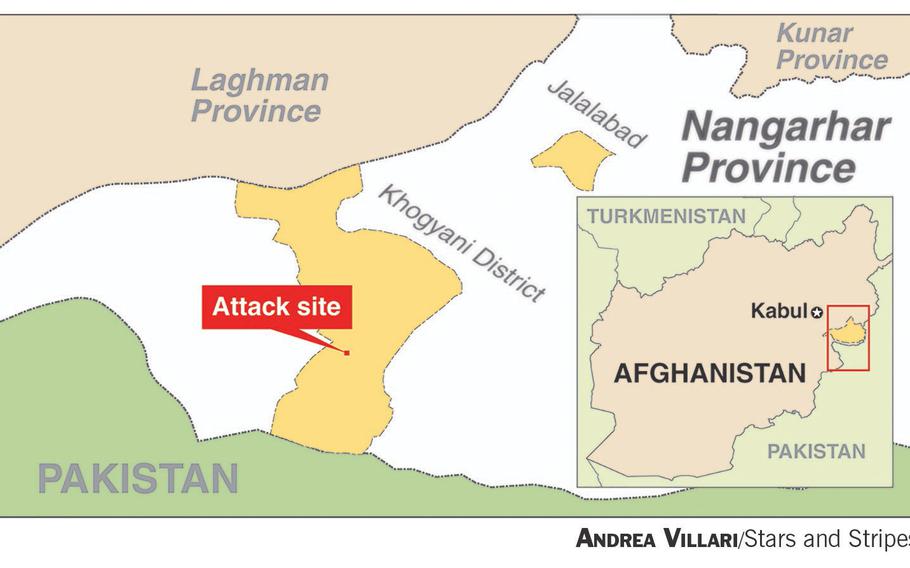 KABUL, Afghanistan — The U.S. military was under fire Thursday from Afghan officials who said an American drone strike in Nangarhar province had killed at least 30 people and wounded more than 40 others.

“This is the cruelest act — how could you not see that they were all poor laborers?” said Mumtaz Arifzai, a member of the local council in Khogyani district, where the strike occurred. “These attacks cause a lot of distrust. If they continue, people will surely start supporting the Taliban.”

The U.S. military confirmed it conducted a precision airstrike targeting Islamic State fighters in the area. A spokesman said claims of civilian casualties were being investigated.

“We are fighting in a complex environment against those who intentionally kill and hide behind civilians,” U.S. Forces-Afghanistan spokesman Col. Sonny Leggett said. “We are aware of allegations of the death of non-combatants and are working with local officials to determine the facts.”

The victims of the strike were farm laborers sleeping in tents, Arifzai said. Provincial council member Ajmal Omar confirmed that more than 30 laborers had been killed in the strike.

The provincial governor’s office said 16 civilians were killed and eight others wounded in what it said was a planned U.S. drone strike that happened at 1 a.m. Thursday. Gov. Shahmahmood Miakhel initially told The Washington Pose that all those killed were militants.

If investigations confirm that civilians were killed in the operation, it would add to a growing number of non-combatant fatalities blamed on U.S. forces in recent months.

American airstrikes in Afghanistan were at their highest level of the year in August, even as the U.S. held peace talks with the Taliban, a report released last week showed.

In a separate attack Thursday, a suicide truck bomb exploded near a hospital in southern Zabul province, killing 20 people and wounding over 90 others, police said.

The Taliban claimed responsibility for the attack, saying it targeted an intelligence service building in the city of Qalat.

The insurgents have been conducting attacks almost daily throughout the country since President Donald Trump abruptly halted peace talks with the Taliban this month. Trump cited a Sept. 5 suicide car bombing that killed an American soldier and 11 other people in Kabul as the reason for the sudden cancellation of the negotiations, which lasted 10 months.