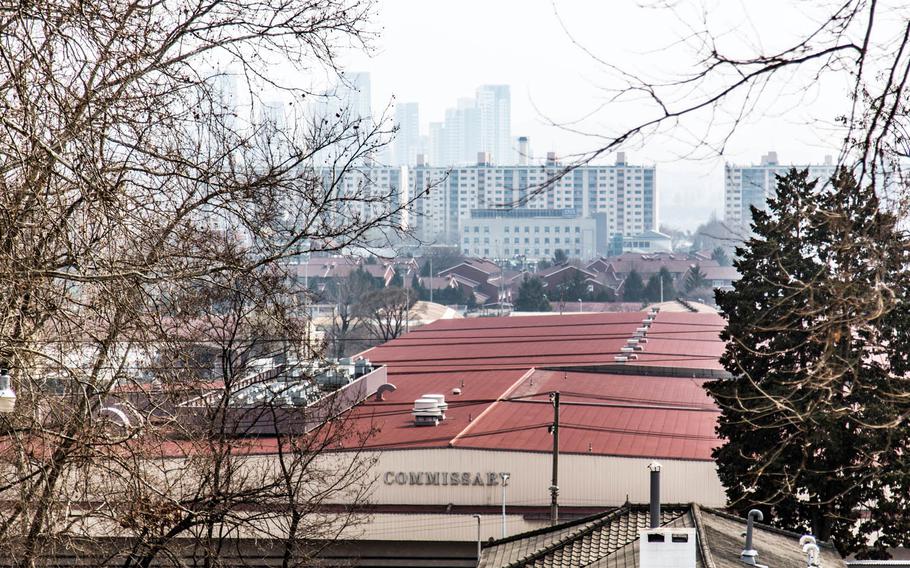 The commissary at Yongsan Garrison in Seoul, South Korea, is pictured on Thursday, March 30, 2017. (Marcus Fichtl/Stars and Stripes)

SEOUL, South Korea — Commissary shoppers in South Korea are being squeezed by bird flu outbreaks on both shores.

The Defense Commissary Agency has stopped shipments of fresh poultry products to South Korea after a March 5 outbreak of avian influenza was traced to a commercial farm in Tennessee.

It won’t affect U.S. shipments of pasteurized and cooked products such as pot pies, lunch meat and other items that aren’t from Tennessee and have the appropriate health certificates.

Japan has blocked poultry only from Tennessee while Taiwan has imposed a ban on the county where the infected flock was found, according to a Reuters report.

The ban affects commissaries in South Korea and not in other countries, DeCA spokesman Richard Brink told Stars and Stripes Friday in an email.

Customers on the peninsula may not notice an immediate change.

DeCA said the 11 stores in South Korea will continue to sell U.S. poultry that was shipped before the ban. It also said uncooked fresh poultry products would be available from local sources.

However, South Korea also has been hit by bird flu, forcing authorities to kill more than 37.8 million poultry since November in its worst-ever outbreak. The previous record was nearly 14 million destroyed in a 2014 outbreak, according to the Ministry of Agriculture, Food and Rural Affairs.

In response to the South Korean outbreak, DeCA began in late February limiting customers to two cartons of U.S. eggs per purchase.

“The carton limit will continue and may be adjusted to ensure the availability of U.S. eggs as long as possible,” Brink said.

South Korea’s outbreak has sharply driven up the cost of poultry and eggs on the local market.

Chicken prices surged to the highest level in three decades, the Yonhap news agency reported last month. It cited industry data showing consumer prices at 5,710 won per kilogram (about $2.30 per pound,) up 2.9 percent from a year earlier.

“Their prices have gone up, but we’re seeing signs of stabilization,” Brink said.

He also said both countries have programs that prevent products from affected animals from being allowed into the food chain.

“The South Koreans have a robust food safety program that meets all our requirements for the health and safety of U.S. personnel,” he said, adding that avian influenza is not a threat to human health.