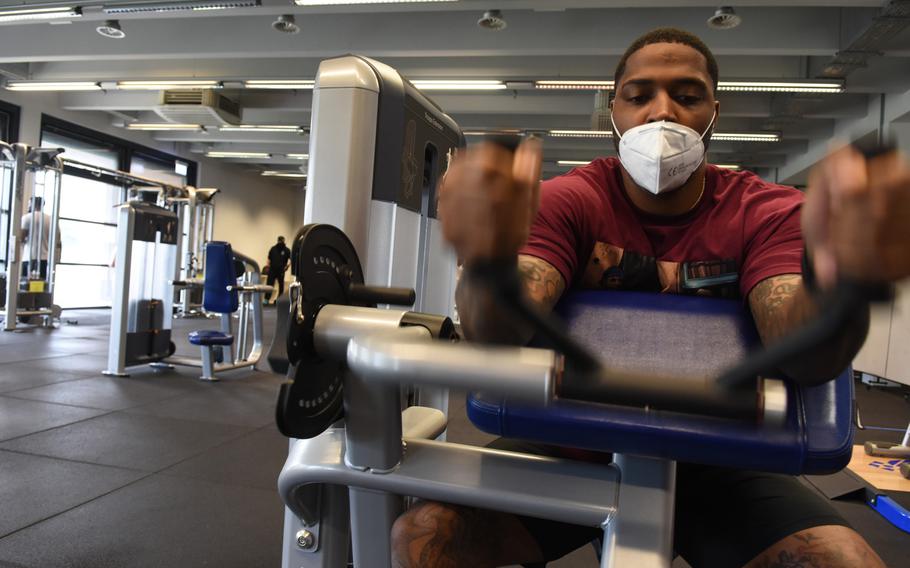 KAISERSLAUTERN, Germany — U.S. military bases in Germany announced new rules to try to keep the resurging coronavirus in check, days before a partial lockdown goes into effect around the country, which saw a record 18,641 new infections in 24 hours Friday.

But while coronavirus rules imposed by the military have in the past often been stricter than host-nation measures, this time some won’t be as stringent as those that will take effect around Germany starting Monday.

“There are going to be some differences for what we implement for this (military) community and what the surrounding populace implements,” Brig. Gen. Jed J. Schaertl, U.S. Army Europe’s deputy commanding general for Mobilization and Reserve Affairs, said during a virtual town hall for U.S. Army Garrison Wiesbaden Friday.

“The reason for that is, we have a different mission, a different function with our facilities than the outside community,” he said.

Since the pandemic began about seven months ago, “we’ve learned a lot,” Col. Bobby Thompson, 86th Mission Support Group commander at Ramstein Air Base, said in a virtual town hall with wing leaders. “This time we’re taking a much more measured response … so that we continue to provide services to the community” and not further affect quality of life.

The base will see some changes, such as dining facilities offering take-out only and the possibility of restricted access to fitness centers, but there will be “few if any closures,” he said.

Other military leaders echoed that. While the German government announced earlier this week that gyms will close for a month as part of the effort to contain the virus, two U.S. military installations, Spangdahlem and USAG Wiesbaden, said their gyms will remain open.

At Spangdahlem, where 52nd Fighter Wing commander Col. David Epperson said he considers gyms “mission essential,” they will only be available to active-duty service members.

“We will use strict hygiene and enable people to remain fit to fight,” Epperson told a virtual town hall audience Thursday. “But if we see ourselves becoming a hot spot … you can expect further restrictions.”

At Wiesbaden, gyms, outdoor basketball courts and playgrounds will remain open during November, Col. Mario Washington, the garrison commander, said during the garrison’s town hall, which he co-hosted with Schaertl.

Although Germany has ordered restaurants to close for all but takeout meals, Wiesbaden’s dining hall for soldiers will remain open for dine-in service, Washington said.

But that will change if infection numbers go up, he said.

At Spangdahlem, food establishments, including dining halls, will offer carry-out only, in line with host-nation guidance, Epperson said.

Schools, day care facilities and playgrounds will stay open, but intramural and youth sports will be suspended, he said.

On Ramstein, schools and child care facilities would also remain open, Thompson said, unlike in the spring when the first wave of the virus hit Germany.

Spangdahlem may also be the only U.S. base in Germany hosting trick-or-treating on Halloween after Epperson said he would allow it because of the “very minimal” number of cases on base.

But it will be restricted to people with a Defense Department or dependent ID card, only individual families can trick-or-treat together, and “enforcers” will ensure trick-or-treaters follow social distancing and other hygiene rules, he said.

And those giving out candy must wear a face covering, maintain physical distance, and wear gloves, he added.

In line with a German call for “unnecessary travel” to be avoided, overnight travel for leisure purposes has been banned, the military leaders said.

The U.S. military’s hotel in the Bavarian resort town of Garmisch-Partenkirchen, the Edelweiss Lodge, said on its website it was “temporarily closing in compliance with host nation rules that go into effect Monday” but would accept reservations for arrivals after Nov. 30.

Spikes of illness in the military community have been tied to “poor discipline and bad choices, like group parties and travel to red areas,” said Brig. Gen. Joshua Olson, the 86th Airlift Wing commander at Ramstein.

“For the most part, we’ve been very disciplined,” he added, urging personnel to remain so headed into the holiday and flu seasons.

But with the pandemic interrupting the flu vaccine supply chain, according to Col. Ryan G.K. Mihata, 86th Medical Group commander at Ramstein, many members of the military community will have to wait for their flu shots. Ramstein has received about 30 percent of the flu vaccines it needs, said Mihata, with more doses expected within the next two weeks.

Landstuhl Regional Medical Center announced Friday that some upcoming flu vaccination clinics have been canceled after delays to delivery of flu vaccine.

The vaccine is, however, available for children 3 and under and adults 65 and older, Mihata said.