US base in Poland gets serious look as talks advance, Mattis says 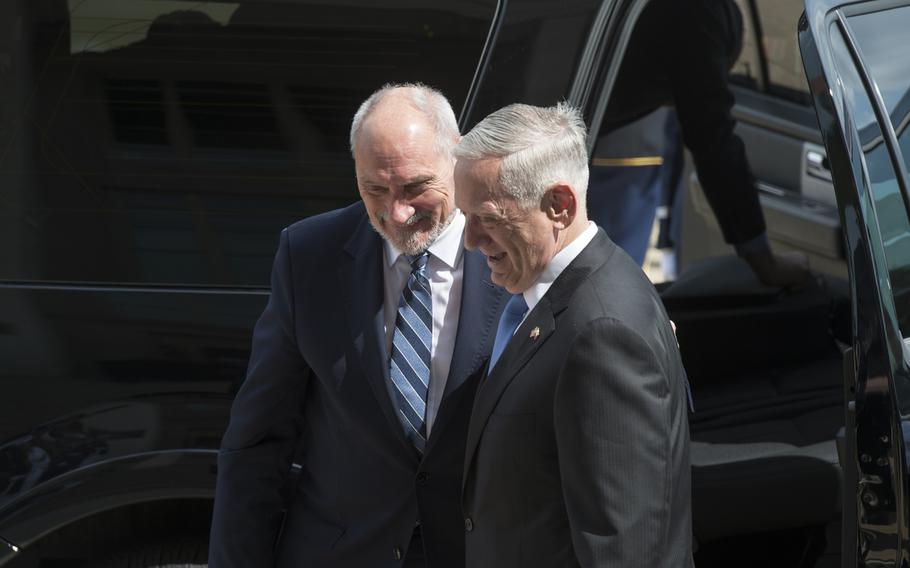 Secretary of Defense Jim Mattis greets Poland Minister of Defense Antoni Macierewicz Sept. 21, 2017, at the Pentagon. Poland has requested that the U.S. set up a permanent military base in the country. (Brigitte N. Brantley/Department of Defense)

STUTTGART, Germany — Discussions about setting up a major American military base in Poland moved forward Tuesday as top defense officials met at the Pentagon to dissect Warsaw’s offer to host a U.S. armored division.

“We are working out the details on what the offer is, what can best contribute to alliance unity, to alliance security and to the continued strengthening of the bilateral relationship,” U.S. Defense Secretary Jim Mattis said before talks with his Polish counterpart Mariusz Blaszczak.

Poland has offered up to $2 billion to help fund a facility where troops and their families could be stationed on a permanent basis. President Donald Trump has expressed interest in the idea, calling the offer ”a very major contribution.” Polish President Andrzej Duda has suggested naming the site “Fort Trump.”

The U.S. is investigating options, but so far Mattis hasn’t publicly expressed support or opposition.

More talks are expected in the months ahead. After meeting with Mattis, Blaszczak said Warsaw’s “proposal for permanent U.S. Army presence in Poland was well received.”

“This has been only a second meeting of the working group. Many more meetings are required,” Blaszczak told Polish media.

For Warsaw, the hope is that the U.S. will set up a base with ground troops, schools, medical facilities and all the infrastructure that is commonplace at major bases around the world. Polish officials see a permanent U.S. force as a more potent deterrent to Russian aggression than an arrangement where NATO troops are constantly rotating in and out of the country.

Since 2014, the U.S. and NATO have boosted their military presence in Poland. The U.S. has a command headquarters in Poznan, a rotational tank brigade positioned at various military outposts and 1,000 additional troops deployed near Poland’s border with the Russian enclave of Kaliningrad.

The Poles are eager to have more U.S. troops in the country’s east while Washington favors locations in central Poland. Blaszczak on Tuesday said an official Pentagon assessment on the issue was expected by March.

There is disagreement among security analysts about the military merits of basing U.S. forces in Poland. Proponents argue it puts American troops closer to potential flashpoints and could possibly prevent Moscow from testing NATO resolve. An Army War College study in 2017 also found that permanently basing troops in Europe is more affordable than constantly rotating them.

Others argue if there was ever a conflict with Russia, troops on base near Russia’s border would be easy targets for Moscow’s long range weaponry. Building an Army garrison in Poland also risks a wider escalation with Russia. Belarus President Alexander Lukashenko warned last week that he would allow Moscow to build up its forces there if neighboring Poland moves forward with a U.S. base.

Still, U.S. military leaders see Poland as the new “center of gravity” in Europe and Warsaw’s offer is getting a serious look.

“We’re going to be discussing that today at length, the details,” Mattis said. “It’s obviously something we’ll discuss with all of the allies as well.”