US base in Afghanistan teeming as the long road home begins 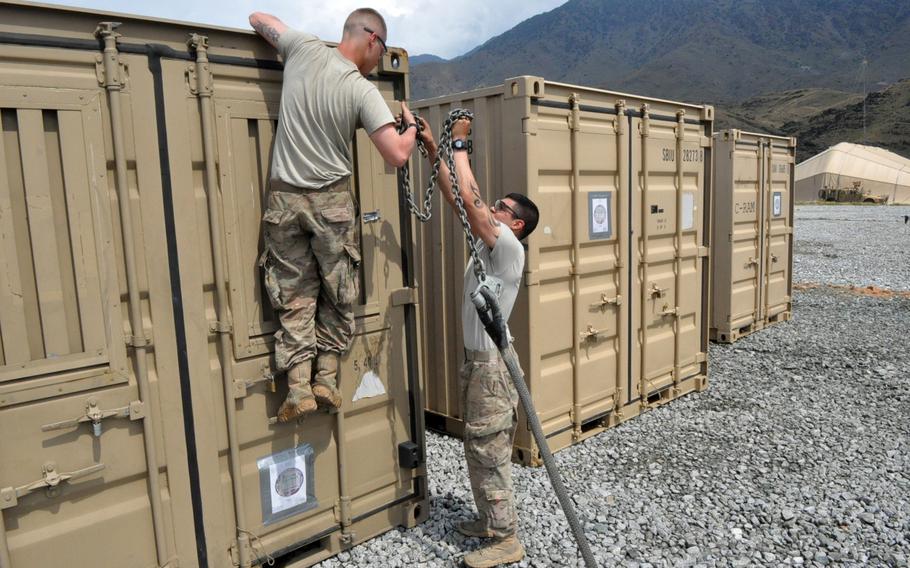 Pfc. Ty Cummings, left, and Sgt. Lucas Strozak prepare a shipping container to be picked up by helicopter at Forward Operating Base Joyce in eastern Afghanistan. The soldiers were packing their equipment after moving to Joyce when Combat Outpost Honaker Miracle was handed over to Afghan forces in June, 2013. (Josh Smith/Stars and Stripes)

Pfc. Ty Cummings, left, and Sgt. Lucas Strozak prepare a shipping container to be picked up by helicopter at Forward Operating Base Joyce in eastern Afghanistan. The soldiers were packing their equipment after moving to Joyce when Combat Outpost Honaker Miracle was handed over to Afghan forces in June, 2013. (Josh Smith/Stars and Stripes) 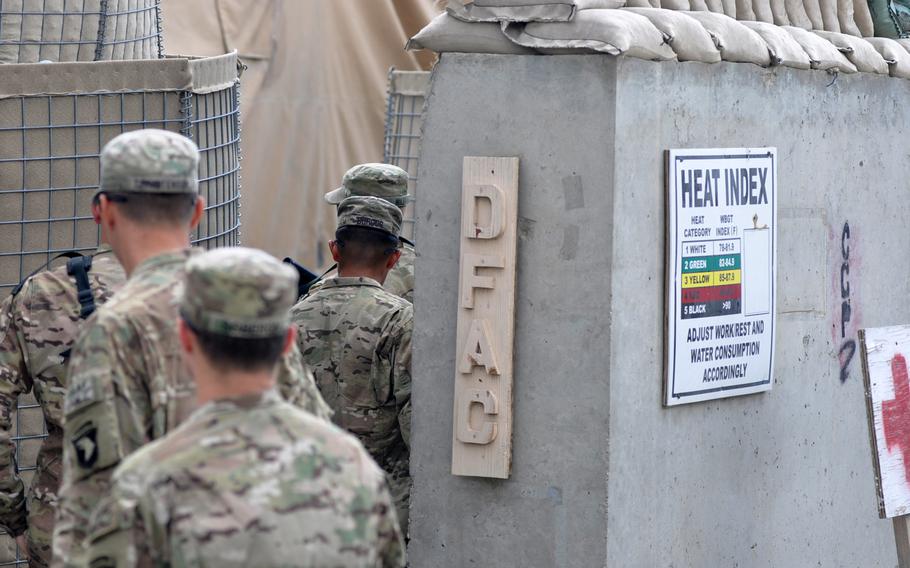 Soldiers with the 1st Combat Brigade Team, 101st Airborne Division, file into the dining facility at Forward Operating Base Joyce in eastern Afghanistan. A sudden influx of troops at the base as other outposts have closed often created long lines at places like the dining hall. (Josh Smith/Stars and Stripes) 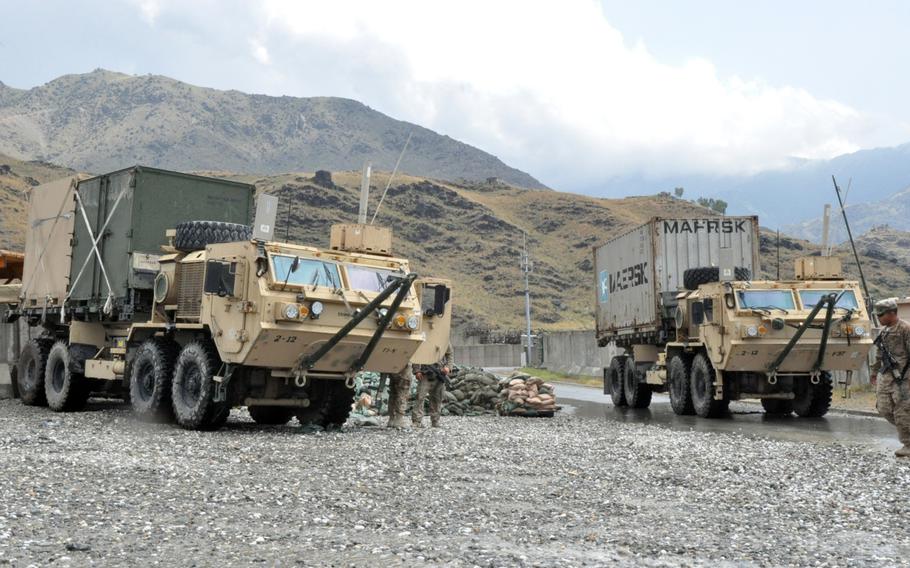 Soldiers with the 1st Combat Brigade Team, 101st Airborne Division position armored trucks at Forward Operating Base Joyce in eastern Afghanistan. Convoys leave daily laden with shipping containers as troops prepare to hand over the base to the Afghan National Army. (Josh Smith/Stars and Stripes) 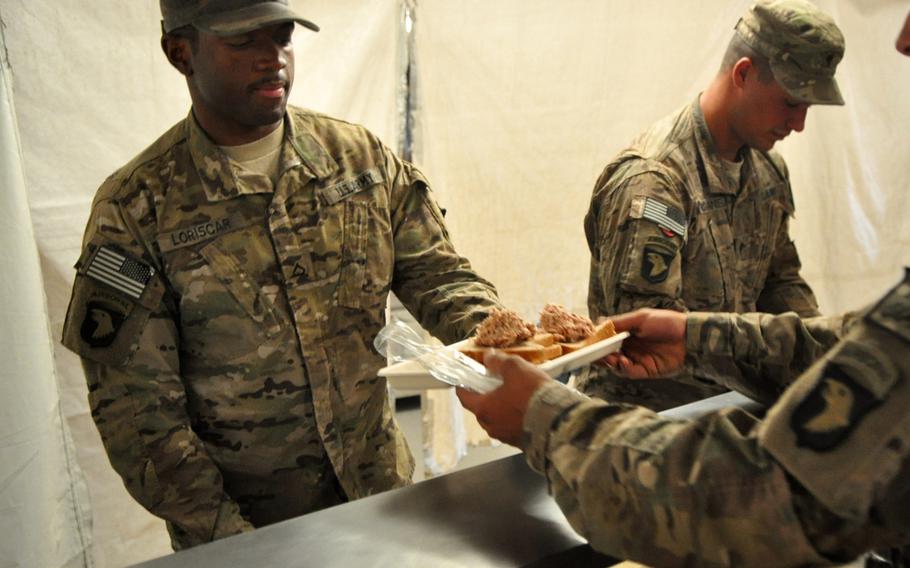 Pfc. Enoch Loiscar, left, and Spc. Mark McDaniel serve sandwiches to other soldiers from the 1st Combat Brigade Team, 101st Airborne Division, based at Forward Operating Base Joyce in eastern Afghanistan. Soldiers have taken over many of the jobs previously done by contractors as troops prepare to hand the base over to the Afghan National Army. (Josh Smith/Stars and Stripes) 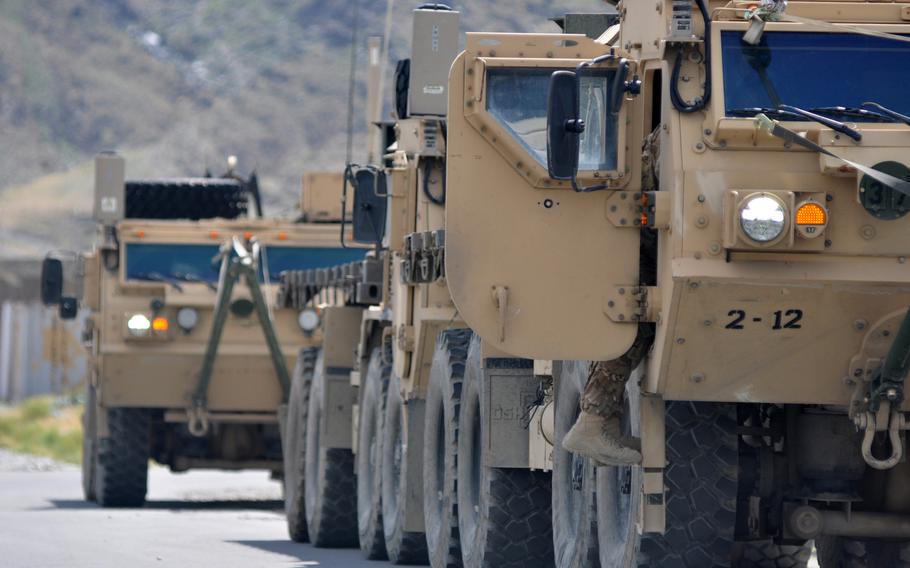 Armored trucks are staged at Forward Operating Base Joyce in eastern Afghanistan. Daily convoys depart the base as NATO troops prepare to hand it over to the Afghan National Army. (Josh Smith/Stars and Stripes)

FORWARD OPERATING BASE JOYCE, Afghanistan – This is what leaving looks like. This base in southern Kunar province is overrun with a mad crush of soldiers and equipment preparing to hit the long road home.

During the troop surge that began in 2010, FOB Joyce housed double the number of soldiers that have been based here in recent months. Now, as neighboring outposts have been shuttered or handed over to Afghan forces, the base is once again experiencing a surge of people and machines.

Beginning in late May, the base’s population exploded from 300 to more than 600 soldiers as four smaller com-bat outposts shut down in one month. Two companies were joined by three more, and the base’s five Security Force Assistance Teams doubled to 10.

The facility handled a similar number of soldiers during the surge ordered by President Barack Obama in 2009 involving 33,000 reinforcements that officially ended with their withdrawal in September. While there were enough buildings to house the incoming units, base officials said it took a significant effort to make them habitable again.

The units will continue to operate from Joyce until the beginning of July, when they will begin to move to larger bases on their way back to the United States. The base is scheduled to be turned over to the Afghan National Army just weeks later, said Capt. Timothy Walton, a company commander with the 1st Combat Brigade, 101st Airborne Division, and the officer in charge of preparations for the Americans’ departure.

U.S. Army CH-47 Chinook helicopters make nightly visits to the base to airlift equipment under the cover of darkness. Shipping containers too heavy to be slung under helicopters are packed into armed convoys that leave on a daily basis. About 400 to 500 containers have been moved out, and many more will come, Walton said.

“On top of all that, we are not only keeping up the advisory mission, but we are also preparing the base for the ANA,” he said. “It can be a challenge to balance the operational requirements with moving out.”

For the average soldier living and working at Joyce, the constant packing and shipping are only a few of the changes.

By late June, the base had yet to shift to serving prepackaged Meals, Ready to Eat, but lunches were restricted to sandwiches, soup and salad. Some food items often ran out.

Since May, soldiers have been tasked to take over almost all jobs that had been done by contractors, including kitchen, dining and laundry duties, as well as responsibility for running the recreation hall and Internet cafe.

In addition to the new responsibilities, the hundreds of extra people on base often mean long lines at the dining hall and generators that struggle to keep up with the additional needs.

Units take turns as food servers and laundry attendants, but more specialized jobs are often difficult to fill, Walton said. The base’s 68 generators need nearly constant attention in the scorching summer heat, but when it comes to fielding enough trained mechanics to maintain them, “we often fall short,” he said.

All the changes and close quarters have made some troops even more excited to leave when the 1st Brigade Combat Team rotates home this summer.

Staff Sgt. George Rodriguez, a member of an advisory team, said FOB Joyce is housing more soldiers than it can handle.

“All the little things may seem petty, but it adds up and you can really start getting cabin fever,” he said.

In general, Walton said, the base’s occupants have stepped into their new roles with few problems.

“There have certainly been growing pains, but I don’t think they mind when they understand the purpose of all of this,” he said.

That’s a sentiment echoed by many of the soldiers who are now taking turns scooping out food, helping with laundry or manning the Internet cafe.

“This base was way nicer than I expected in the first place,” said 1st Lt. George Hayworth, a member of an advisory team on his first deployment.

“That doesn’t change the fact that all the changes suck, but when you understand what it’s for, it makes sense.”