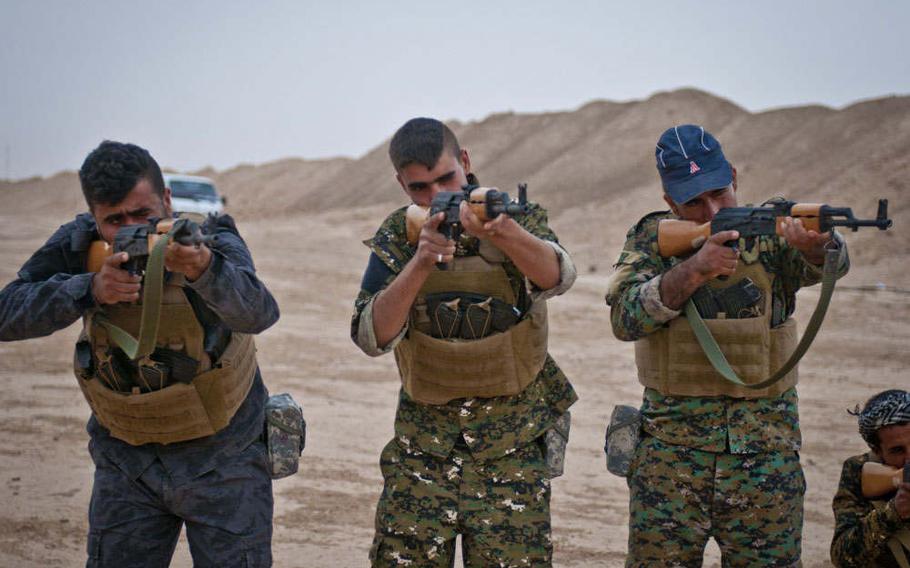 Syrian Democratic Forces practice marksmanship before a live-fire exercise near Shaddadi, Syria, May 27, 2018. The U.S.-led international coalition continues to train local forces in Syria to combat ISIS, although the group has lost most of the territory it once held in the region. (Timothy Koster/US Army)

Syrian rebels trained by the U.S.-led, anti-Islamic State coalition have destroyed $1.4 million worth of drugs belonging to the extremists, which they’re said to use to fund operations and to boost their fighting performance, the coalition said Monday.

Maghawir al-Thawra rebels destroyed the cache of fenethylline, known as the “jihadi’s drug,” last week, Combined Joint Task Force-Operation Inherent Resolve said in a statement. The highly addictive amphetamine-based substance was seized at the end of May during an operation against ISIS in southern Syria.

“Despite Daesh’s facade of Islamic purity, its criminal terrorists are known drug users and traffickers,” the task force said, using an Arabic acronym for ISIS.

Drugs sales have become a significant source of revenue for the group since it lost control of oil wells and refineries across Iraq and Syria, according to the Popular Mobilization Forces in Iraq, which fight the militants.

Fenethylline, also known by its trade name Captagon, is said to make fighters alert in battle, keeping them awake for longer periods and making them feel happy and energetic. While it has become associated with ISIS, the United Nations believes it has been used by all sides in the Syrian conflict.

Operation Inherent Resolve said more than 300,000 pills were seized in the latest operation near the international coalition’s al-Tanf military base.

The coalition has been training Maghawir al-Thawra rebels, known in English as the Revolutionary Commando Army, to carry out patrols and ambushes and to establish checkpoints to combat ISIS and secure the borders with Iraq and Jordan.