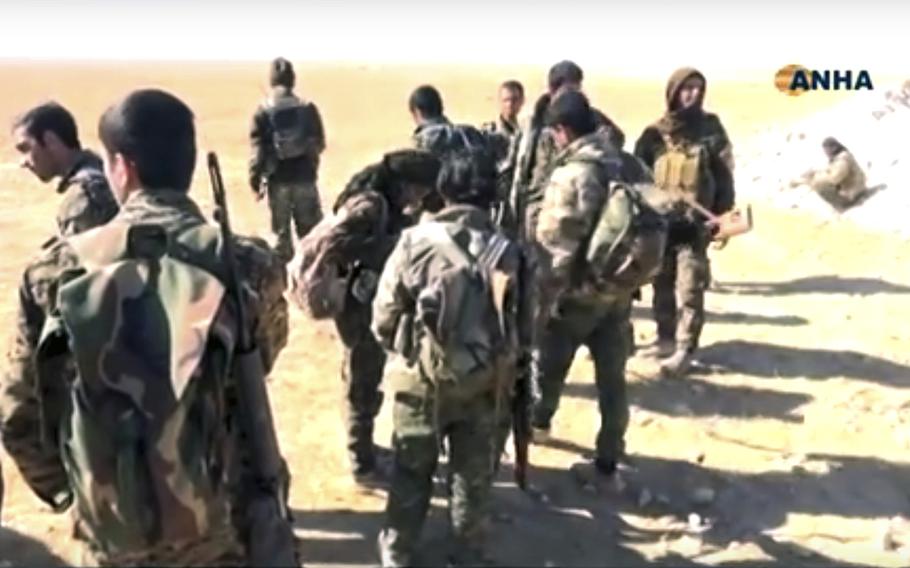 This frame grab from video provided on Monday, Nov. 7, 2016, by the Hawar News Agency, shows U.S.-backed fighters deployed during fighting with the Islamic State group in the village of Laqtah, north of Raqqa, Syria. Turkey said Tuesday that Washington has promised that U.S.-backed Syrian Kurdish forces will only be involved in encircling the Islamic State stronghold of Raqqa and will not enter the city itself. (Hawar News Agency/AP)

WASHINGTON — Coalition aircraft and artillery have bombarded Islamic State targets around Raqqa, Syria, with 241 munitions in the 10 days since Syrian Democratic Forces began their march toward the terrorist group’s capital, a Pentagon spokesman said Tuesday.

The U.S.-led coalition’s bombs, rockets, artillery and mortar shells have aided the U.S.-aligned Syrian Democratic Forces in liberating about 210 square miles of land north of the city since it began “Operation Euphrates Rage” on Nov. 5, according to an SDF statement. The group has moved to within about 30 miles of Raqqa’s northern border, where it will soon complete a pincer maneuver that will cut off a pocket of Islamic State group fighters from Raqqa, said Navy Capt. Jeff Davis, the Pentagon spokesman.

“They’ve continued to make gains,” Davis said. “They’re much closer now on their road to Raqqa … but they still have a ways to go.”

The Islamic State group has put up only minimal resistance so far, Davis said. Most of the land recaptured from the militants has been in very rural areas north of Raqqa, and the terrorists have largely focused on retaining access to key roads, he said.

Nonetheless, the Syrian Democratic Forces have touted their early efforts to isolate Raqqa as an overwhelming success. In a statement released Tuesday, the SDF claimed it had liberated 36 villages north of Raqqa and killed 167 Islamic State fighters during the first phase of the operation. At least four SDF fighters have been wounded, according to the statement. The Pentagon did not confirm those numbers.

But the battle to actually retake Raqqa from the Islamic State group remains far into the future, Davis said. Pentagon officials said it could take months for the SDF to encircle Raqqa and isolate the estimated 5,000 Islamic State fighters inside. Planning for the actual assault remains ongoing and is strained by political tensions between key U.S. allies, including the SDF and Turkey.

The SDF, which includes about 30,000 Kurdish, Arab and Turkmen fighters, is largely comprised of Kurdish YPG fighters, a group that the United States has backed but Turkey considers a terrorist organization.

Turkey has balked at the inclusion of the YPG in any assault on Raqqa, a largely Sunni Arab city of about 200,000 inhabitants.

Gen. Joseph Dunford, chairman of the Joint Chiefs of Staff, and other key Pentagon leaders have met with Turkish leaders to ensure them that the SDF is focused only on isolating the city, and the eventual assault would be led primarily by local Arab fighters.

“The coalition and Turkey will work together on the long-term plan for seizing, holding and governing Raqqa,” Dunford said last week.

Pentagon officials have previously said the SDF constitute the only group capable now of isolating Raqqa, but they welcome all capable forces to assist in the anti-Islamic State operations.

“We continue to focus on the isolation of Raqqa, working with the SDF to support them,” Davis said Tuesday. “We are talking with all of our partners about how we move from that isolation and into the liberation phase that will come later.”