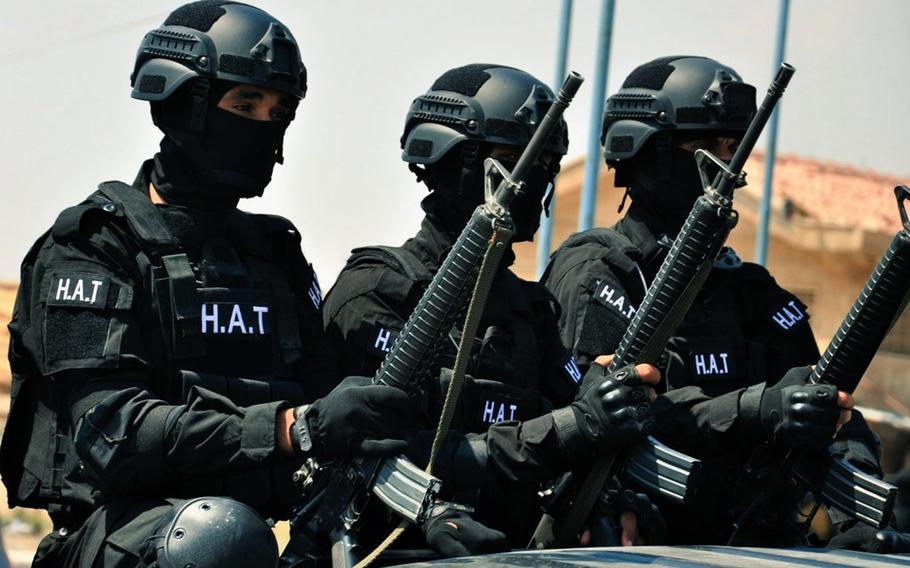 Anti-terrorism commandos of the Syrian Democratic Forces are shown here in an undated photo the SDF Coordination and Military Operations Center posted to Twitter on Monday, April 13, 2020. (Twitter/Syrian Defense Forces)

In two operations supported by coalition aircraft over 72 hours, Syrian Democratic Forces apprehended four “elements of the active cells” in Deir al-Zour province, a hotbed of ISIS activity in the country’s northeast, the Kurdish-led group said on Twitter.

The raids were part of an ongoing effort to “combat and tighten the noose on ISIS activities,” it said.

The operations were a sign of the competence and commitment of the anti-terror commandos, said Col. Myles B. Caggins III, spokesman for the U.S.-led Operation Inherent Resolve.

“The Coalition continues to support the SDF for anti-ISIS operations by sharing intelligence and providing eyes-in-the-sky, while we all face the challenge of preventing the spread of COVID-19,” he said in a text message late Monday.

Though it’s been more than a year since ISIS was ousted from its last territorial stronghold, the group continues to wage an insurgency in both countries, carrying out assassinations, kidnappings and bombings.

In Iraq, security forces fought an ISIS sleeper cell for hours in Kirkuk province, the latest in a series of recent clashes.

The coalition has continued to support anti-ISIS operations with combat support and intelligence assistance, despite withdrawing hundreds of trainers after the coronavirus outbreak there led the government to pause military training.

Inherent Resolve has also been consolidating its troops on larger bases and building up defenses against the growing threat of attack from Iran or its Shiite militia proxies. Officials have seen a spike in disinformation and threatening messages online, Caggins said last week.

Meanwhile, concerns over the spreading coronavirus pandemic may have distracted forces on both sides of the Syrian battlefield, said Robin Fleming, a researcher with the Rojava Information Center, in a report last week that found anti-ISIS operations had declined sharply in March, with just three confirmed arrests for the whole month, compared to 96 in February.

ISIS attacks also fell, the independent activist group in northeastern Syria reported. Deaths from assassinations were down about two-thirds, but the group was still distributing fliers throughout Deir al-Zour province earlier this month, threatening anyone working with the civil authorities or SDF in northeastern Syria, Fleming said.

The coalition provided hospitals and SDF-run prisons with about $1.2 million in medical equipment and riot gear late last month, citing the need to bolster both the COVID-19 response and the detention of alleged ISIS members, who it said would likely try to exploit any weakness and resurge.

Days after the supply delivery, coalition aircraft aided the SDF in suppressing a riot where alleged ISIS fighters had attempted a prison break.