US B-52 flights approach China-occupied islands 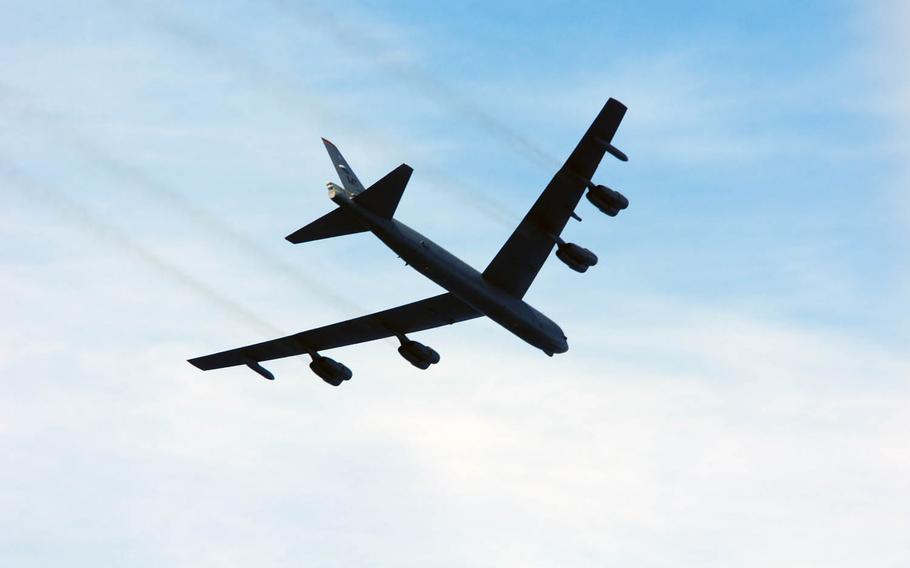 A U.S. Air Force B-52 Stratofortress flies above the aircraft carrier USS Ronald Reagan in 2010. Two Air Force B-52 bombers flew over international airspace within 15 nautical miles of one of the Spratly Islands recently, prompting a Chinese radio warning. (Joseph Buliavac/U.S. Navy photo)

TOKYO — Two Air Force B-52 bombers flew over international airspace within 15 nautical miles of one of the Spratly Islands recently, prompting a Chinese radio warning.

The flights, which took off Nov. 8 from Andersen Air Force Base, Guam, and landed Nov. 9, came amid disagreement between China and several other nations over freedom of navigation rights in the South China Sea, where more than $5 trillion in global trade transits annually.

“The two aircraft received two verbal warnings from a Chinese ground controller despite never venturing within 15 nautical miles of any feature,” Pentagon spokesman Cmdr. Bill Urban said Thursday night from Washington. “Both aircraft continued their mission without incident, and at all times operated fully in accordance with international law.”

Urban declined to specify which of the Spratly Islands the aircraft were flying nearby. Some news reports cited an unidentified source contending that the aircraft flew over Spratly Island itself, which is unlikely, since it is occupied by Vietnam.

The B-52 mission was routine and not designated a “freedom of navigation” operation, Urban said. On Oct. 27, the destroyer USS Lassen conducted a freedom of navigation operation near disputed Subi Reef, which is believed to be an artificial island that China has created on top of a submerged reef.

Lassen sailed within the 12-nautical-mile territorial boundary that China claims surrounding Subi. The U.S. and other nations do not recognize the claim under international law because Subi is considered an artificial island.

A Chinese destroyer shadowed the U.S. vessel on Oct. 27, but Lassen crewmembers later told Stars and Stripes that communication between the two ships remained calm and professional throughout the mission.

The operation nevertheless drew a protest from Beijing, which maintains an ambiguous claim on about 90 percent of the South China Sea and its waters. Several other nations in the region voiced their support for the U.S. action.

Vietnam, Taiwan, Malaysia, Brunei, the Philippines and Indonesia all hold claims to some or all of the islands.

The U.S. uses freedom of navigation operations to assert the freedom of all nations, under international law, to fly and sail within the global commons.

However, it also flies and sails through the international commons of the South China Sea on a regular basis to reach ports of call and conduct training.

The Spratly Islands are a collection of islands, rocks, reefs and shoals spanning hundreds of miles within the South China Sea. Some of the claimed “islands,” such as Subi Reef, are submerged at high tide and generally considered by international law analysts to be unclaimable under the U.N. Convention of the Law of the Sea.

However, this hasn’t stopped China from dumping more than 2,900 acres of landfill on top of several submerged reefs and other land features since 2014, according to a Pentagon report on maritime activities released in June. Although other nations have also engaged in island building, China’s actions have far surpassed its rival claimants, according to the Pentagon.