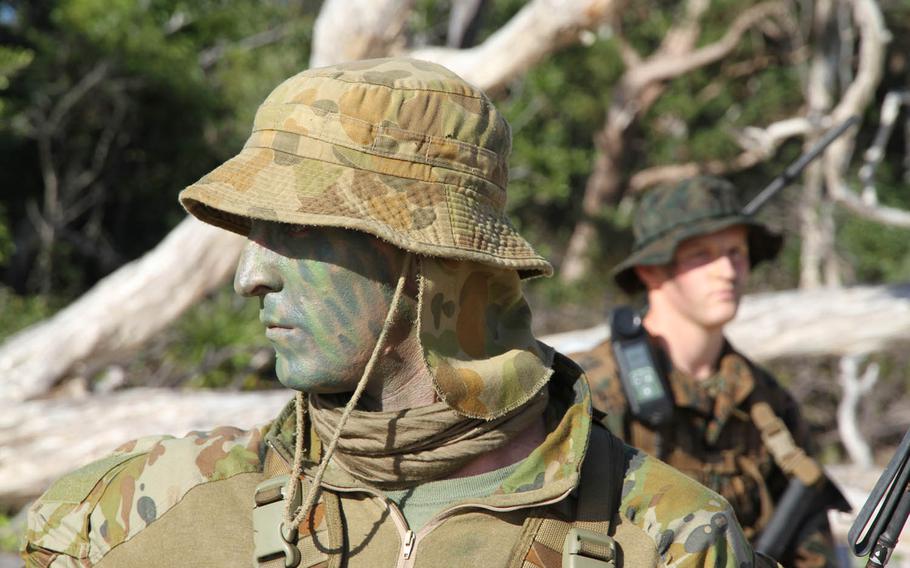 SHOALWATER BAY TRAINING AREA, Australia — Under the cover of darkness, U.S. and Australian troops aboard the USS Green Bay loaded into small rubber boats early Wednesday and crept toward the eastern Queensland shore.

The Marines from the Okinawa-based 31st Marine Expeditionary Unit and soldiers from the 2nd Battalion, Royal Australian Regiment were laying the ground work for a joint U.S.-Australian amphibious landing — part of the monthlong Talisman Saber exercise underway Down Under — slated to commence at dawn.

More than 33,000 Australian and U.S. troops are participating in the biennial exercise, which has an imaginary foe with capabilities that mirror those of major military powers such as China and Russia. The war games include simulated cyber operations, Special Forces, naval and air movements, bombardment, acts of deception and assaults from the sea and air.

The exercise has also marked a historical achievement for the Australians, who demonstrated new amphibious capabilities that have been years in development.

Before Wednesday’s invasion could commence, the small reconnaissance force needed to clear the beach and set up a helicopter landing zone. The sounds of gunfire from opposition forces — played by Army National Guard troops — quickly interrupted their mission.

“We were going up the road and took contact off and to the left, from the bushes up there, the trees,” Marine Sgt. Douglas Shaffer said while pointing into the brush. “We reset, came back on the road, then took contact again from up on the left, in the trees; came back, and by that time, they were taking contact from the [helicopter landing zone] here.” 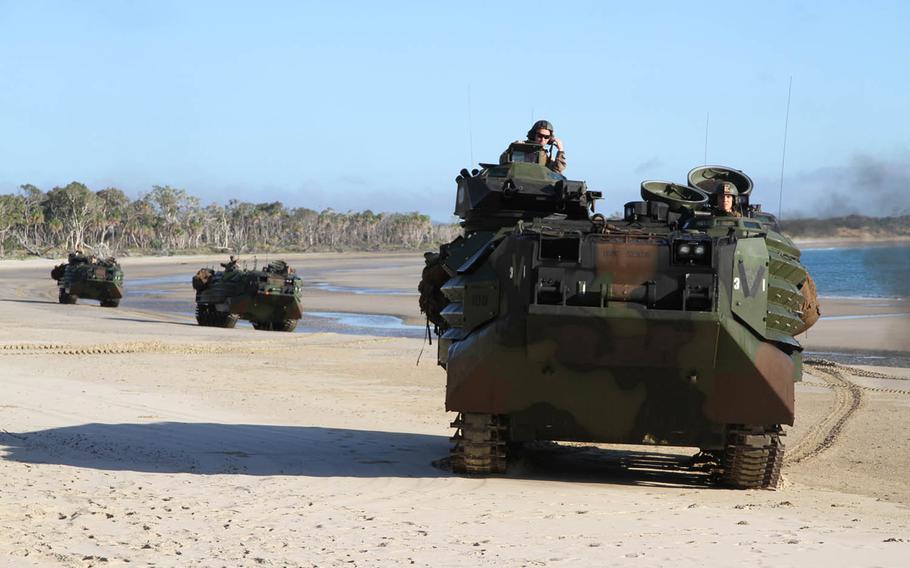 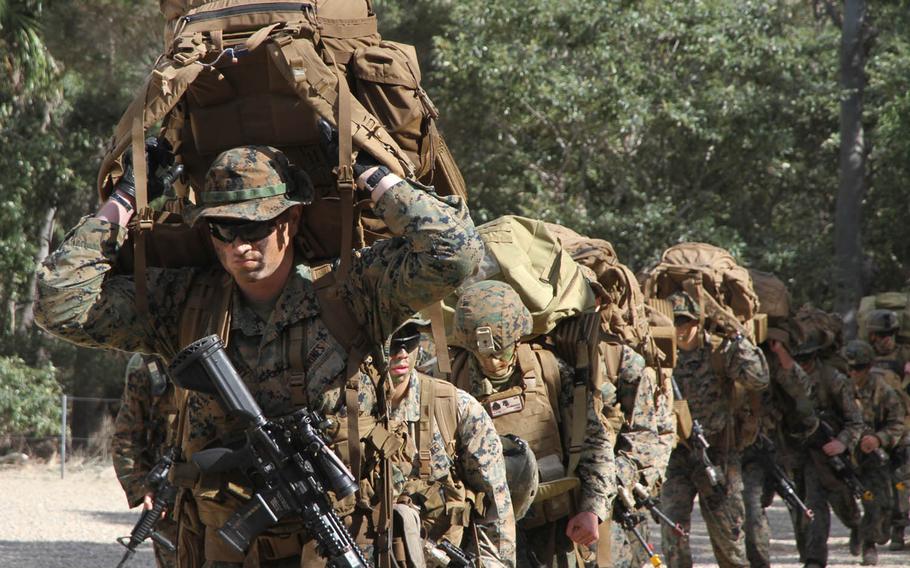 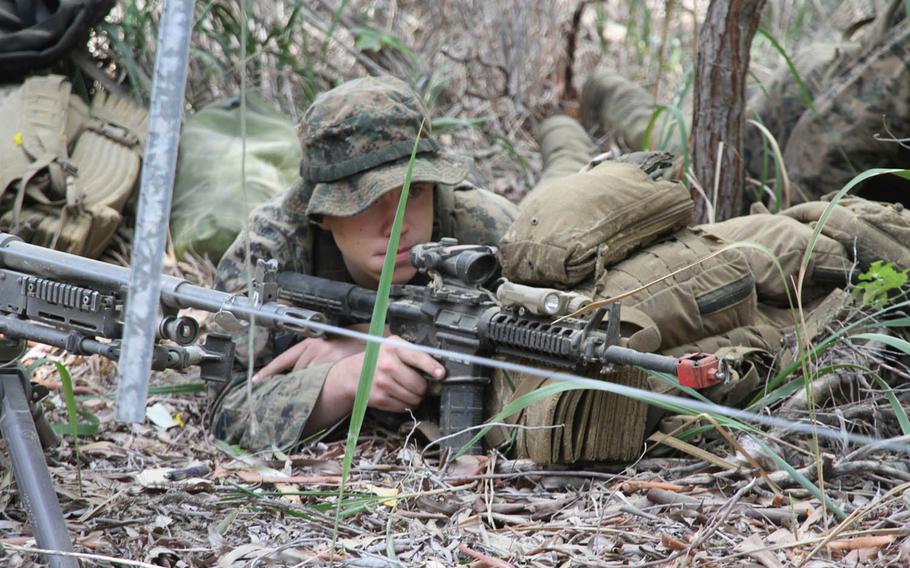 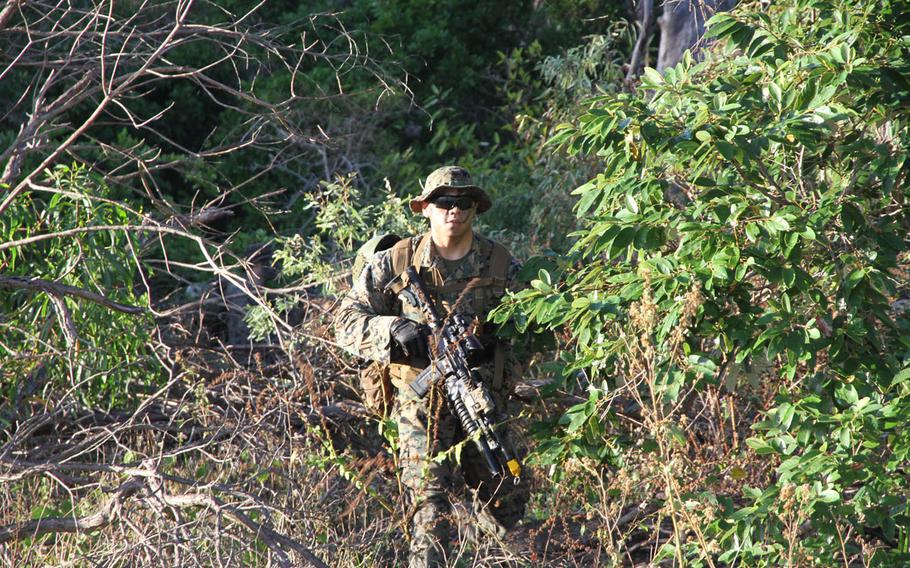 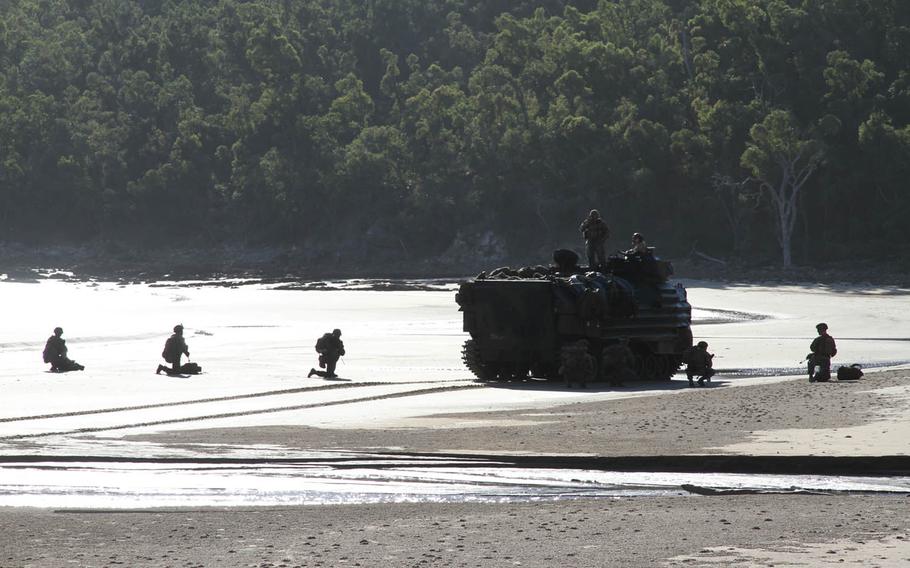 Shaffer and his men moved west to set up a blocking position, but encountered stiff resistance. All along a road from the beach, Marines could be seen firing in prone positions from the undergrowth pushing out the opposition by the time amphibious-assault vehicles filled with Marines hit the beach about a half-hour later.

Launched from the well-decks of the USS Bonhomme Richard and its expeditionary strike group, the assault included more than 50 vehicles and 500 Marines coming ashore within just a couple of hours, said Marine Lt. Col. Jackson Doan, battalion commander for 3rd Battalion, 5th Marines, the unit deployed to the 31st MEU from Camp Pendleton.

While amphibious assaults are routine for Marines, they are relatively new for the Australians, who have been showcasing those skills this month at Talisman Saber. On July 13, the Aussies conducted their largest amphibious landing since World War II at Langham Beach, Stanage Bay.

The Australians — who worked for the past six years to build their amphibious capability — have gained a lot of ground very quickly, Shaffer said.

“I’ve been in the Marine Corps three years and we’ve done dozens of these operations,” he said. “Working with the Australians, it’s nice to have an equal force … it’s almost like having another one of our craft out there. They’re right on our same level, so it’s great.”

Twenty Aussie soldiers participated in the assault. Australian Army Sgt. Michael Morton, of the 2nd Battalion, Royal Australian Regiment, said the army is branching out to be part of the nation’s “amphibious commitment.”

“Obviously, we have that small-boat capability to provide the insertion method for the pre-landing force,” said Morton, who added that they can also perform surface assault swimming and rocky landings, in addition to their usual demolition, mine-clearing and engineering duties.

“The skillsets and the level of training we’re provided with now are second to none,” he said.

“It’s been two years since we’ve worked with the U.S. Marines with amphibious insertion, so it’s been a really good experience on Talisman Saber this year,” he said. “We got the job done.”

Congerton called Wednesday’s assault a “culminating event” for the joint forces. All nations involved have learned from each other and should incorporate certain things, such as boat set-up, into their repertoires, he said.

Marine Cpl. Kevin Poole, who came ashore in the second wave, said Talisman Saber, while challenging at times, has been a positive experience. The 22-year-old from Clemson, S.C., said everything from the choppiness of the seas to the humidity and spiders made training in Australia a unique experience.

“I’ve only been here for an hour, and I’ve seen a lot of spiders,” Poole said while trying to suppress a smile. “It’s been good training. I don’t want to say we’re used to it, but we’re just doing our job.”

As Talisman Saber 2017 heads into its final days, the troops fighting at Shoalwater Bay appear to be moving closer to victory, which will require clearing a Military Operations on Urban Terrain town, or MOUT, facility.

“Ideally we win, but if we don’t have a good plan and we don’t have good tactics then [the enemy will] have the ability to gain the upper hand, and we’ll have to face the consequences of that,” he said.

They have no idea what’s coming at them, Doan added with a smile.