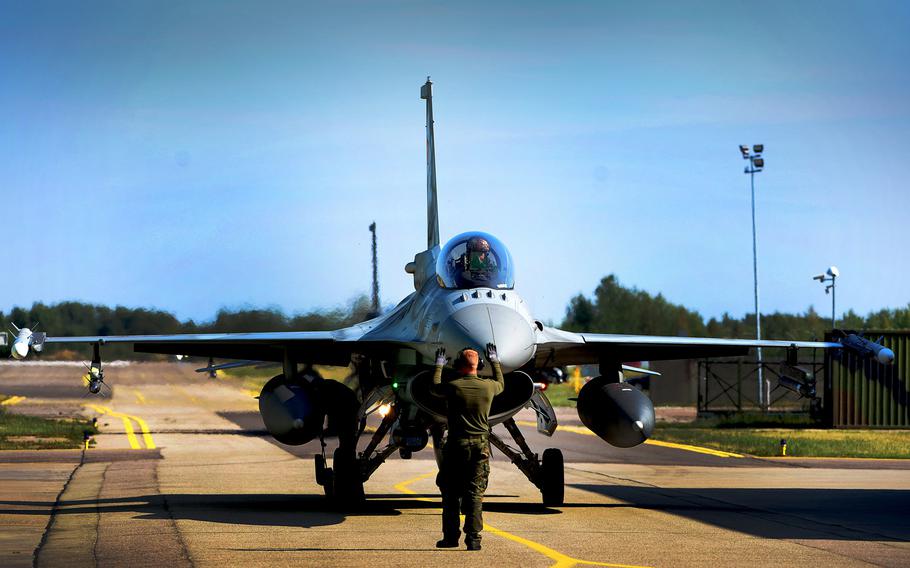 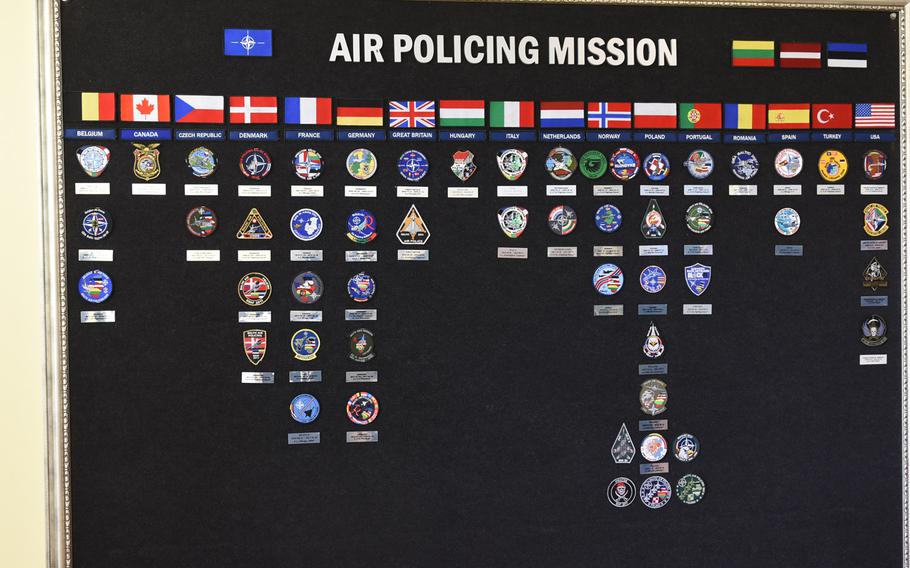 Buy Photo
A bulletin board at Siauliai Air Base, Lithuania displays squadron patches from the nations participating in the Baltic air policing mission since it began in the spring of 2004. (Jennifer H. Svan/Stars and Stripes) 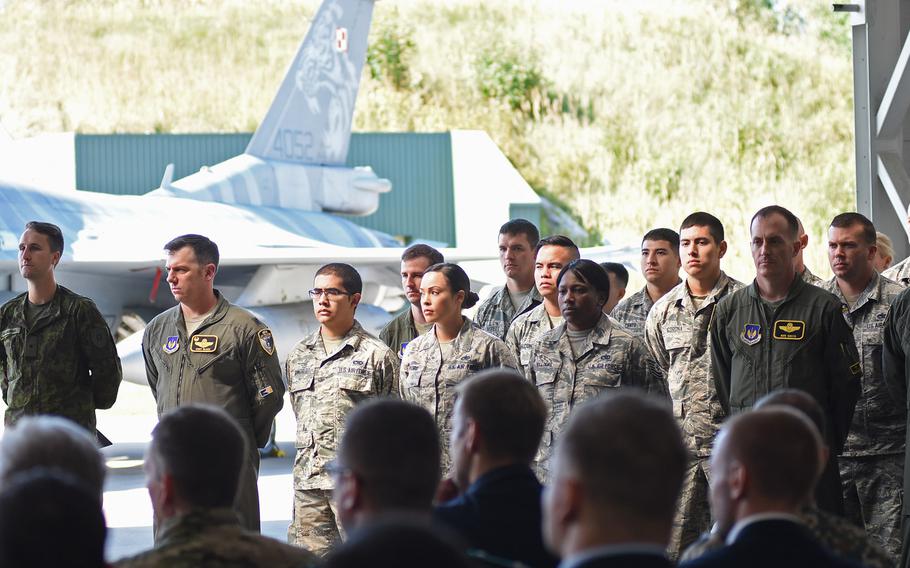 Buy Photo
Airmen from the 493rd Fighter Squadron at Royal Air Force Lakenheath, England, stand during a ceremony on Wednesday, Aug. 30, 2017, at Siauliai Air Base, Lithuania. The ceremony marked the transfer of the control of the Baltic air policing mission from the Polish to the U.S. Air Force. (Jennifer H. Svan/Stars and Stripes) 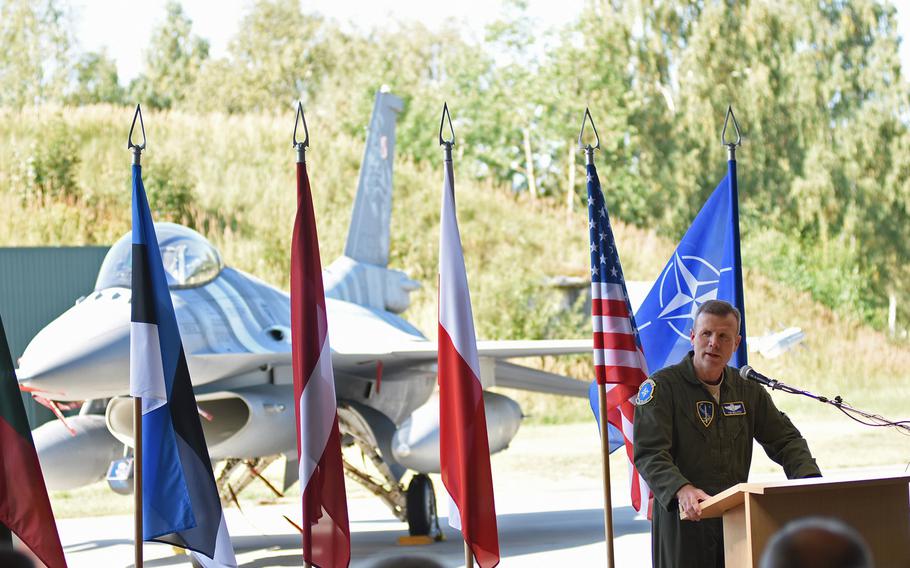 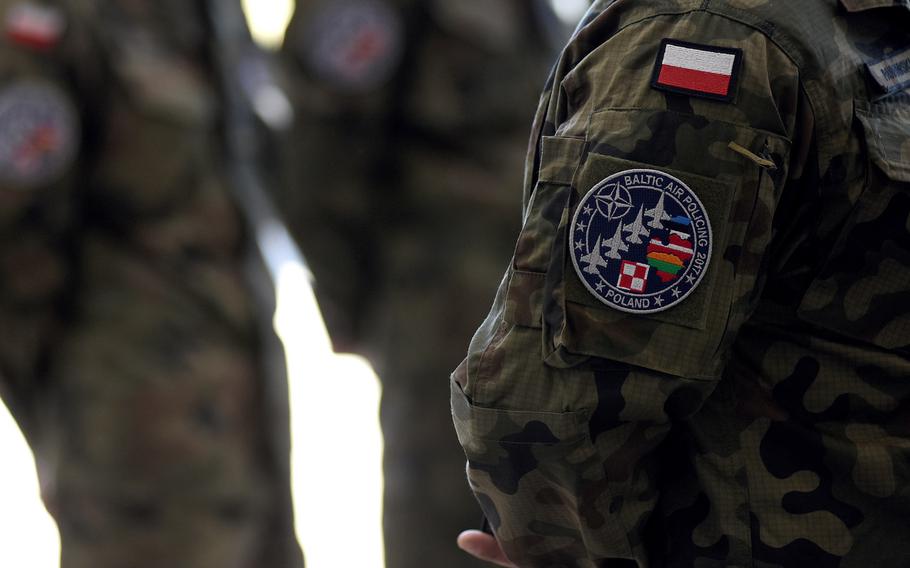 Buy Photo
Members of the Polish air force earned a patch to war on their uniform, signifying their participation in the Baltic air policing mission this summer. (Jennifer H. Svan/Stars and Stripes) 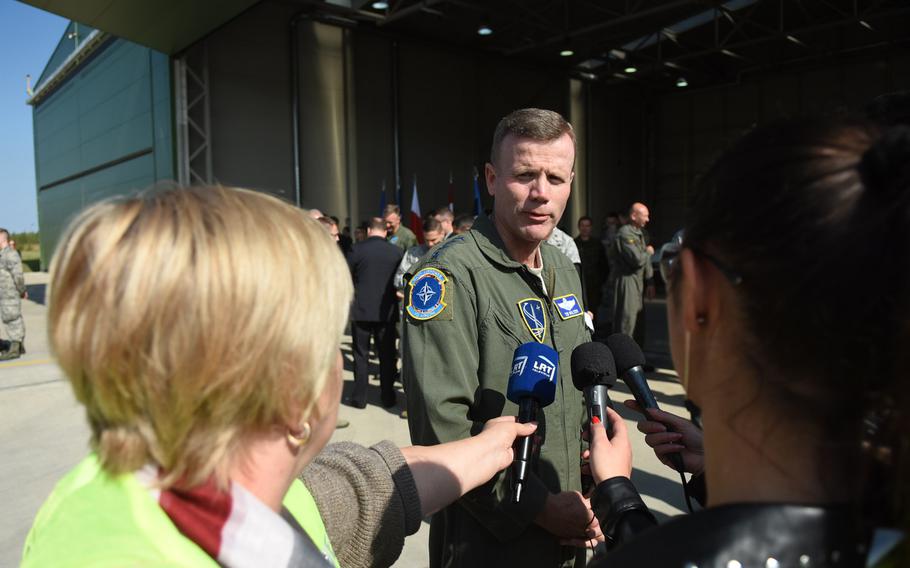 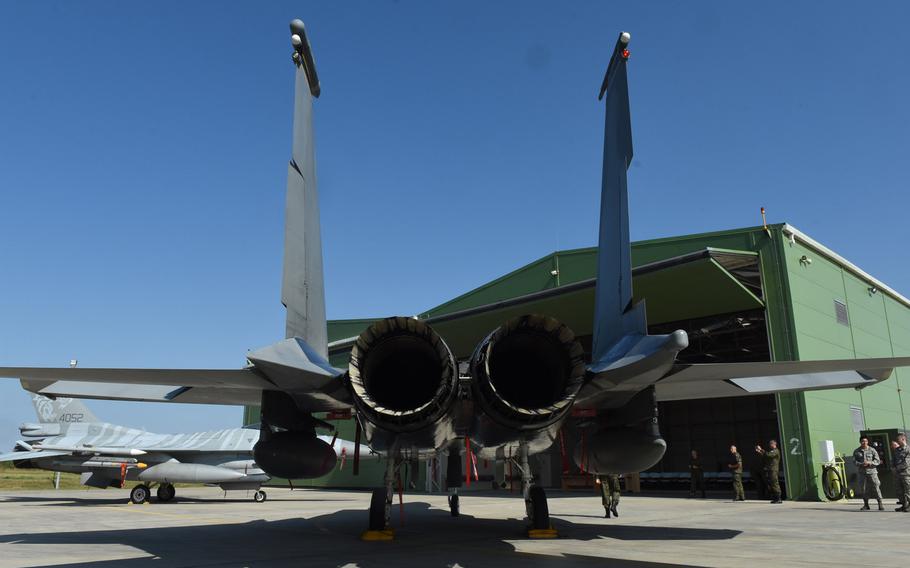 Buy Photo
An F-15C Eagle from Royal Air Force Lakenheath, England, sits outside a hangar next to a Polish F-16 at Siauliai Air Base, Lithuania on Wednesday, Aug. 30, 2017. (Jennifer H. Svan/Stars and Stripes ) 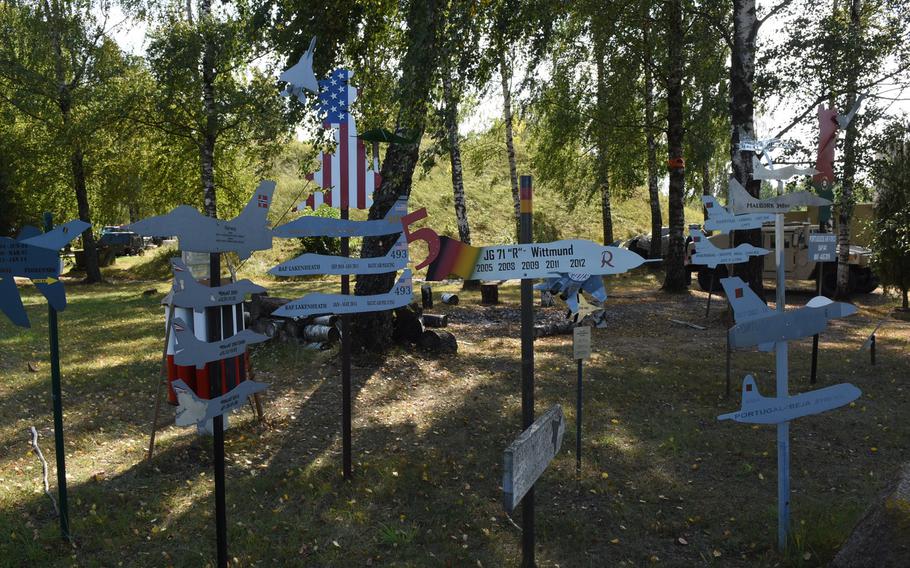 Buy Photo
Squadrons of nations participating in the Baltic air policing mission display their part in the campaign with miniature aircraft signage at Siauliai Air Base, Lithuania. (Jennifer H. Svan/Stars and Stripes) 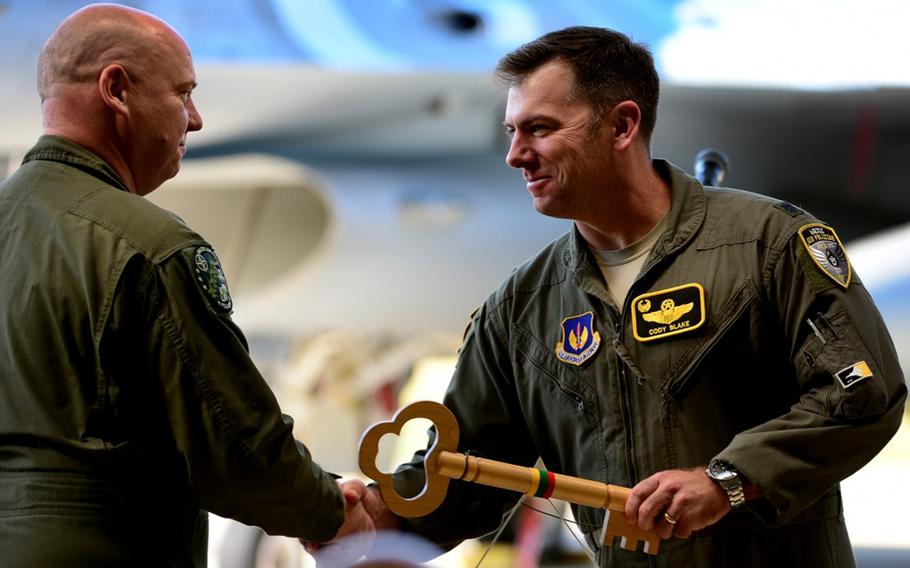 SIAULIAI AIR BASE, Lithuania — Under blue skies that stretched clear to the Baltic Sea, the U.S. assumed the lead in NATO’s Baltic air policing mission here Wednesday, committing to safeguarding the airspace over Estonia, Latvia and Lithuania for the next 120 days.

The hand-over from Poland to the U.S. Air Force took place ahead of large Russian war games set to kick off in September across the border from Lithuania, which have worried allies in the Baltics and Poland.

But little was said about the Zapad 2017 exercise by top defense officials at a ceremony Wednesday to mark the transfer, even as the U.S. deployed a larger-than-usual number of jets for the rotation, its first since 2014.

“Seventeen of our NATO nations have made the decision to contribute, and here we are one more time to recognize this great turnover,” said Gen. Tod Wolters, the U.S. Air Forces in Europe- Air Forces Africa and NATO Allied Air Command commander.

Noting it was America’s fifth rotation, Wolters said, “I know that all of our maintainers, operators, mission supporters and that beautiful F-15C will do whatever it takes ... to protect the beautiful sovereign skies above Lithuania.”

About 140 airmen and seven F-15C Eagles from the 493rd Fighter Squadron at Royal Air Force Lakenheath in England arrived in Lithuania earlier this week to replace Poland as the nation in charge of scrambling aircraft when Russian planes maneuver nearby.

The rotations began in the spring of 2004 to support NATO member states without combat planes of their own.

The seven fighters from Lakenheath represent one of the largest air policing contingents in the mission’s history, with countries typically deploying four aircraft. They will share the mission with Belgian Air Force F-16 jets at Amari, Estonia.

NATO requires at least two aircraft be ready on standby 24 hours a day, seven days a week, for the duration of the rotation.

The U.S.’s shift will overlap with plans by U.S. Army Europe to bolster its presence in the Baltics. Some 600 paratroopers from the 173rd Airborne Brigade are en route to the region for six weeks.

“During their rotation the U.S. troops will conduct situational training and live firing on their own as well as take part in joint exercises together with units of the Land Forces of the Lithuanian Armed Forces,” the Lithuanian Defense Ministry said.

While the 173rd is home-based in Italy, the unit on rotation is the brigade’s detached Germany-based 1st Squadron, 91st Cavalry Regiment, which will have troops dispersed to Estonia, Latvia and Lithuania.

Air Force officials said the larger number of jets at Siauliai is not in response to Zapad — Russian for “west” — scheduled to begin in coming weeks in Belarus, the Baltic Sea, western Russia and the Russian enclave of Kalingrad.

“The additional aircraft have to do with training,” Wolters told journalists after the ceremony.

Allies have expressed concern about Russian aircraft flying near NATO territory without using transponders, something that could be a factor during Zapad.

The number of scrambles under NATO’s Baltic air policing has recently decreased, according to NATO officials. In 2015, jets scrambled 185 times, compared with 130 times last year. Through August of this year, there have been about 65 scrambles.

In one particularly busy week last month, NATO fighter jets from Lithuania and Estonia were scrambled three times to intercept Russian military aircraft in international airspace over the Baltic Sea, The Baltic Times reported, citing the Lithuanian Defense Ministry. In all three cases, the Russian aircraft had filed flight plans and kept in radio contact with air traffic control, but their onboard transponders were switched off, according to the report.

Sometimes an intercept can involve simply “getting eyes” on an aircraft, said Lt. Col. Cody Blake, the 493rd Fighter Squadron commander, one of about eight pilots deployed to Lithuania from Lakenheath for Baltic air policing.

“If it’s not sending the right notification to the ground system back to the controllers, they may just want to know what is that airplane because it’s getting close to a certain border,” he said. “It’s nothing provocative.”

Two pilots and two backup pilots are in “alert status” 24 hours a day, for two to three days, Blake said. U.S. pilots were to go on alert starting Thursday.

At Siauliai, that means eating and sleeping in flight gear in a building near the flight line, “waiting for the claxon to go off,” signifying an intercept mission, said another pilot deployed from the 493rd. The squadron allows only the commander to be identified by name for operational security purposes.

“It’s like being a fireman,” he said. “The scrambles always get your heart racing.”

Lithuanian airmen said they were looking forward to working with the Americans.

“It’s really important for us,” said Alvydas Tamosiunas, a chief master sergeant in the Lithuanian Air Force, gesturing towards a wall displaying dozens of patches from the squadrons of 17 countries that have participated in the campaign since 2004. “We are part of the team; it’s like a fist, you know.”