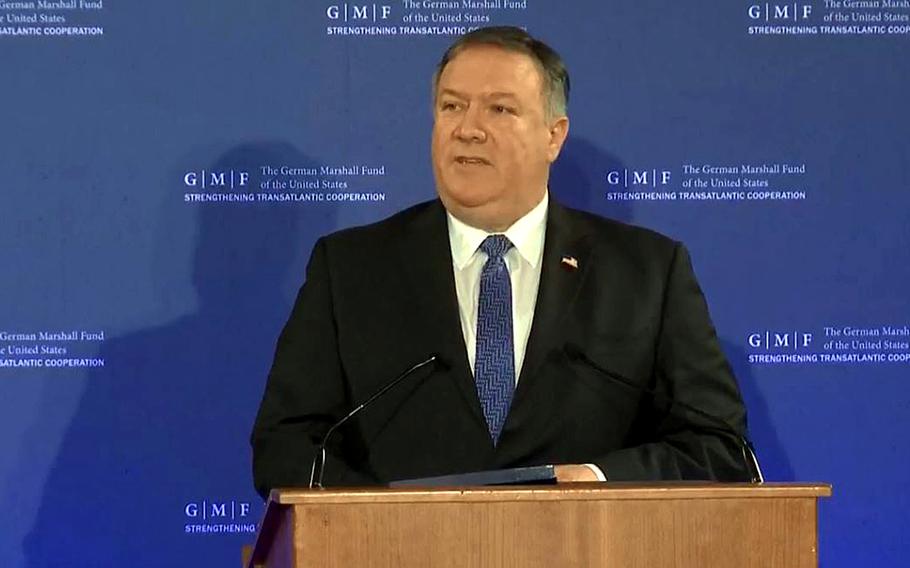 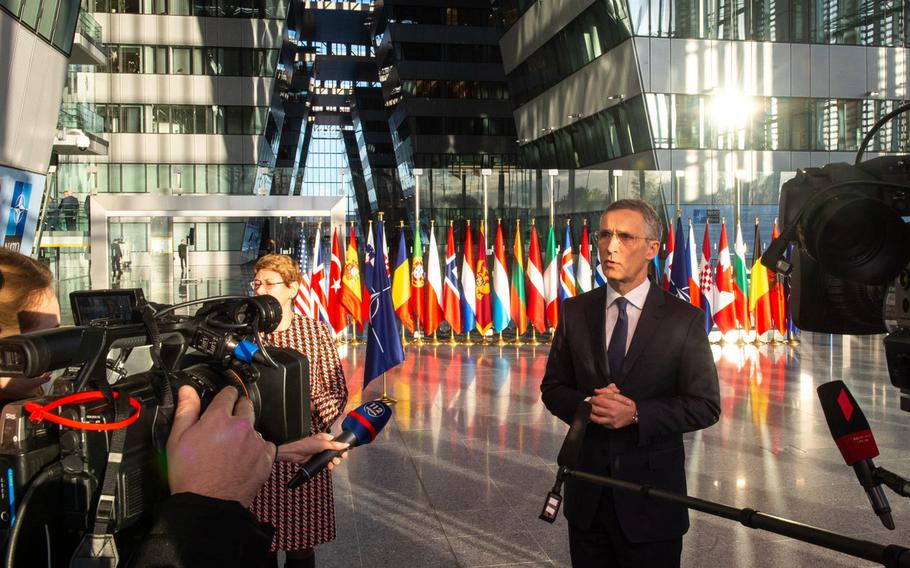 NATO Secretary-General Jens Stoltenberg talks to the media before the start of the NATO foreign ministerial meetings at the organization's headquarters in Brussels, Belgium, Tuesday, Dec. 4, 2018. (Courtesy of NATO)

U.S. Secretary of State Mike Pompeo will urge NATO allies during talks in Brussels on Tuesday to take a tougher stance against Russia after last week’s attack on Ukrainian vessels and Moscow’s suspected violation of a key nuclear weapons treaty.

In talks with allies and Ukrainian officials at NATO headquarters, Pompeo planned to call on Europeans to “show leadership in tackling a problem that’s in Europe’s own backyard,” a senior State Department official told reporters Monday en route to Brussels, according to an official transcript.

Before the NATO meeting, Pompeo on Tuesday delivered a wide-ranging speech in Brussels that alleged international treaty violations by Russia, China and Iran. He said allies need to recognize when such agreements no longer work.

“Even our European friends sometimes say we’re not acting in the free world’s interest. This is just plain wrong,” Pompeo said. “We are acting to preserve, protect and advance an open, just, transparent and free world of sovereign states. This project will require actual, not pretend, restoration of the liberal order among nations.”

After an afternoon meeting of alliance foreign ministers and Ukrainian officials, no new NATO countermeasures were announced in response to Russia’s attack on three Ukrainian ships in the Sea of Azov.

However, NATO Secretary General Jens Stoltenberg said allies were united in condemning Russia’s actions, have built up in the Black Sea region over several years and will assess whether more needs to be done going forward.

“We will continue to assess or presence in the region,” Stoltenberg said.

So far, it is unclear what the U.S. and NATO could do in response to Russia’s aggressive actions in Ukraine and around the Black Sea, but the U.S. official suggested that actions are in the works.

“We’re looking at a lot of measures both on the U.S. side, coordination with allies, and you’ll be seeing more in the days ahead of how we and our allies will jointly message, and where appropriate take action,” the U.S. official said.

For its part, the U.S. has provided lethal military aid to Ukraine during the past year. In Brussels, the U.S. could ask allies to take similar action.

“I think the administration has been forceful and clear up to and including providing a lot of lethal aid to Ukrainians,” the senior U.S. official said.

The U.S. wants to see Europe take on “greater responsibility” for the security problem, “and we’ll be right there with them every step of the way,” the official said.

Tensions have been mounting since Russia’s attack on three Ukrainian ships near the strategic Kerch Strait, a body of water that connects the Sea of Azov to the Black Sea. NATO has condemned the actions, but so far, allies haven’t taken any specific countermeasures. Ukrainian President Petro Poroshenko has called on NATO to send ships into the Sea of Azov, which is surrounded by Ukraine and Russia, but allies have not indicated any interest in taking such a forceful move.

On Monday, Stoltenberg said allies already have beefed up their support of Ukraine in recent years and boosted their military presence in and around the Black Sea.

Allies also will discuss ways to pressure Moscow to comply with the 1987 Intermediate-Range Nuclear Forces Treaty between Washington and Moscow.

Allies say a new Russian missile, known as the 9M729, is in violation of the accord. The INF treaty bans missiles with a range of between 310 and 3,400 miles.

Stoltenberg has said the Russian system gives Moscow the ability to attack European capitals with little to no warning. The U.S. has threatened to leave the treaty if Moscow doesn’t come into compliance.

German media has reported that Washington was ready to pull out of the treaty during NATO talks in Brussels but will now wait two months to allow time for negotiations with Moscow.

“We are also concerned about the new Russia missile system, which puts the INF treaty in jeopardy,” Stoltenberg said. “It’s urgent that Russia ensures full compliance in a transparent and verifiable way.”

The U.S. is expected to coordinate with allies this week in Brussels to “chart a joint way forward in how we tackle the problem of Russian noncompliance with INF,” the U.S. official said.