US Army says farewell to Schweinfurt 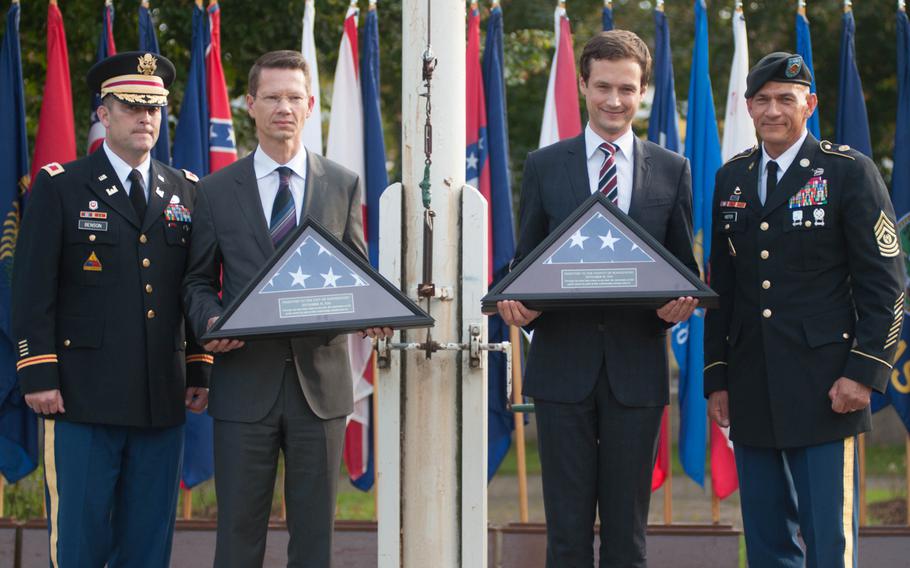 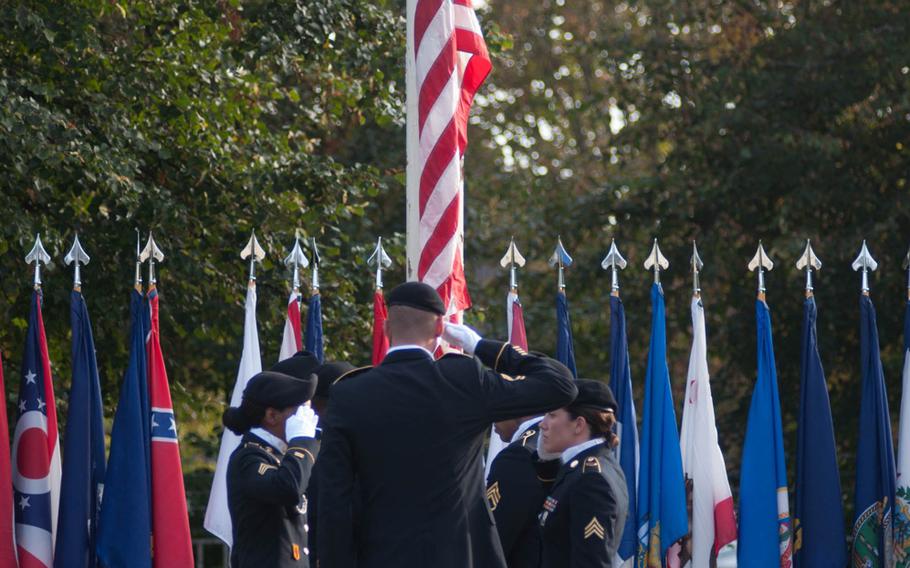 Buy Photo
The American colors are lowered for the final time at the Ledward Barracks in Schweinfurt. The military base there closed after 70 years of service, Sept. 19, 2014. (Michael S. Darnell/Stars and Stripes) 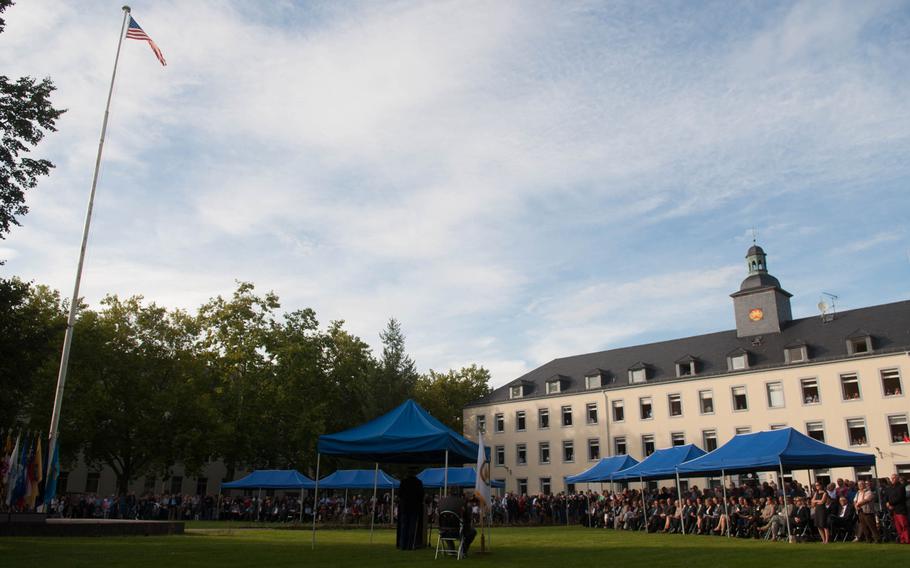 Buy Photo
U.S. Army Garrison Ansbach commander Col. Christopher Benson addresses a crowd that grew to such a size that the Ledward Barracks headquarters building was packed to overflowing, as the town of Schweinfurt turned up to bid farewell to the American military community, Sept. 19, 2014. (Michael S. Darnell/Stars and Stripes) 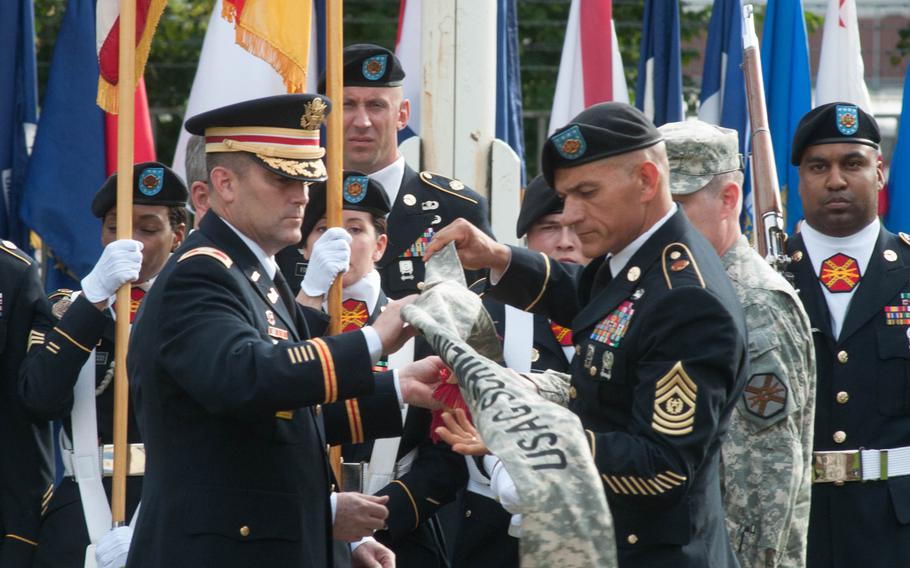 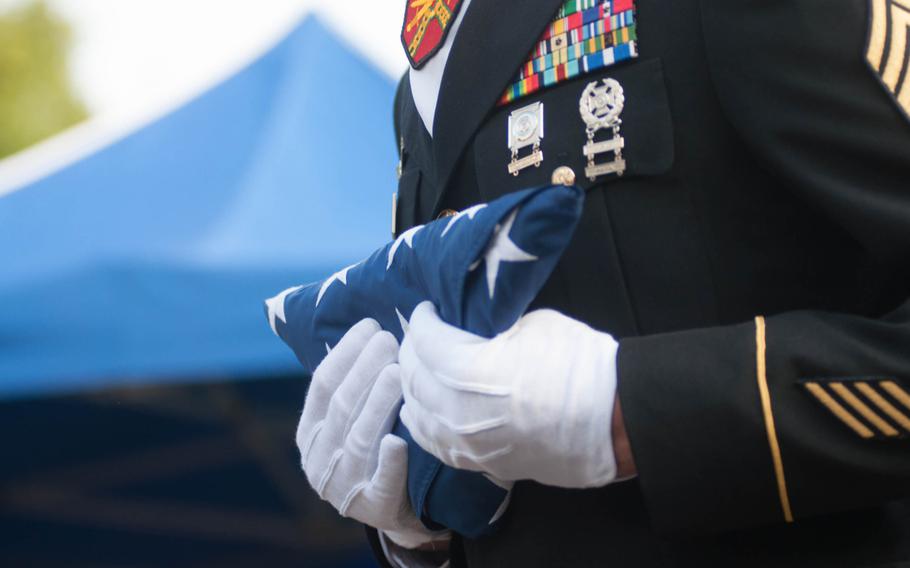 Buy Photo
The final American flag to be flown over the Schweinfurt Army garrison is carried away during the final moments of the Schweinfurt's base closing ceremony, Sept. 19, 2014. The ceremony was attended by hundreds of local residents, community leaders and military personnel, who turned up to say goodbye to what was once a center of military operations in Germany. (Michael S. Darnell/Stars and Stripes)

SCHWEINFURT, Germany — At U.S. military bases throughout the world, the “To the Colors” bugle call signals the lowering of the American flag and the symbolic end to the work day.

The simple ceremony was conducted at the Schweinfurt Army garrison for the final time on Friday, as what remained of the base’s facilities and grounds were officially turned over to the German government.

A gathering of former soldiers, community members and VIPs, including Schweinfurt mayor Sebastian Remelé, were on hand to witness the final lowering of the colors at Ledward Barracks.

The proceedings contrasted sharply with the images of Schweinfurt as it once was: as a home to thousands of troops.

“For us today, this is a sad moment. In the last 70 years we became friends, the Americans who were part of the German community,” Remelé said. “For sure we have to look forward, but today we are all full of memories and little bit of sadness. We wish our American friends the best, and we thank them for all they have done for us.”

Schweinfurt’s closing is the latest piece of the U.S. military’s realignment in Europe, aimed at significantly reducing and consolidating America’s footprint across the continent. Its closure follows last week’s shuttering of the Bamberg military base and puts an end to 70 years of American operations in the area.

“I feel very fortunate to be a part of Schweinfurt and their history,” Col. Christopher Benson, the commander of U.S. Army Garrison Ansbach, the garrison Schweinfurt has fallen under since the departure of that garrison’s commander earlier this year. “Historic installation, great garrison, great city and great people. It’s been fantastic to be a part of that.”

The base was an integral part of the German war effort during World War II, thanks to its Luftwaffe training areas and ball-bearing production facilities in town. On April 22, 1945, the U.S.’s 42nd Division, 7th Army seized control of the town and military facilities, and it has been an American foothold ever since.

As recently as lasts year, roughly 12,000 American personnel called Schweinfurt home, though that number has been trickling down since the 2012 announcement of the base’s planned closure.

The members of the community formed strong bonds, perhaps best exemplified by two visitors who have opposite, but equally firm roots in the Schweinfurt community.

Retired Chief Warrant Officer 4 Charles Nanowsky has lived in the area since 1988, first as an Army helicopter pilot, then as a resident of the township upon his retirement. Like many soldiers who have settled near military communities, his ties to the area were strengthened by marriage. His family came with him to the ceremony to say goodbye.

On the other side of the fence, were the Germans who in some cases, have never known a Schweinfurt without that American influence. Ursula Holstein has lived in Schweinfurt her entire life – 59 years and counting. For three decades, she worked as a nurse and later a medical liaison for the military community and for her, this closure means more than just shifting borders on a map.

“It’s a very, very sad moment. I hate to see the Americans leave Schweinfurt because we have grown together and I’ve worked with the Army for 33 years and we were like a family,” she said. “It’s a big challenge for the community and the city of Schweinfurt, it’s sad that they’re leaving, and I would have preferred they stayed. A lot of great memories.”

In May, the last operational units — the 18th Engineer Brigade, the 7th Theater Tactical Signal Brigade and the 72nd Expeditionary Signal battalion — left the base, leaving behind a small detachment tasked with helping to transition the base to German hands. They are the final American soldiers to leave Schweinfurt.

For those troops, Friday’s ceremony was a bittersweet one.

“Just the community support that both communities had, with the German community right off post, it was like they were linked even though they were kind of divided by a fenceline,” Army Capt. Dane Hiltner, the last commander of the now dispersed 630th Military Police Company, who served in both Bamberg and Schweinfurt. “It was just a really good partnership that is sadly coming to an end after 70 years in both communities, it’s very sad and I’m honored to be one of the last soldiers in either of these communities.”