US Army in Europe recognizes best in theater at 'Toppers' Buy Photo
Tonya Holloway and Christopher Mazen walk off stage after picking up their Special Judges' Choice Awards Saturday, April 25, 2015, for their original music on Stuttgart Theater Center's production of ''Her Stories.'' (Matt Millham/Stars and Stripes)

Buy Photo
Tonya Holloway and Christopher Mazen walk off stage after picking up their Special Judges' Choice Awards Saturday, April 25, 2015, for their original music on Stuttgart Theater Center's production of ''Her Stories.'' (Matt Millham/Stars and Stripes) Buy Photo
Giovanna Castellanos performs the song ''On My Own'' from the musical ''Les Miserables'' at the Topper Awards in Kaiserslautern, Germany, April 25, 2015. (Matt Millham/Stars and Stripes) 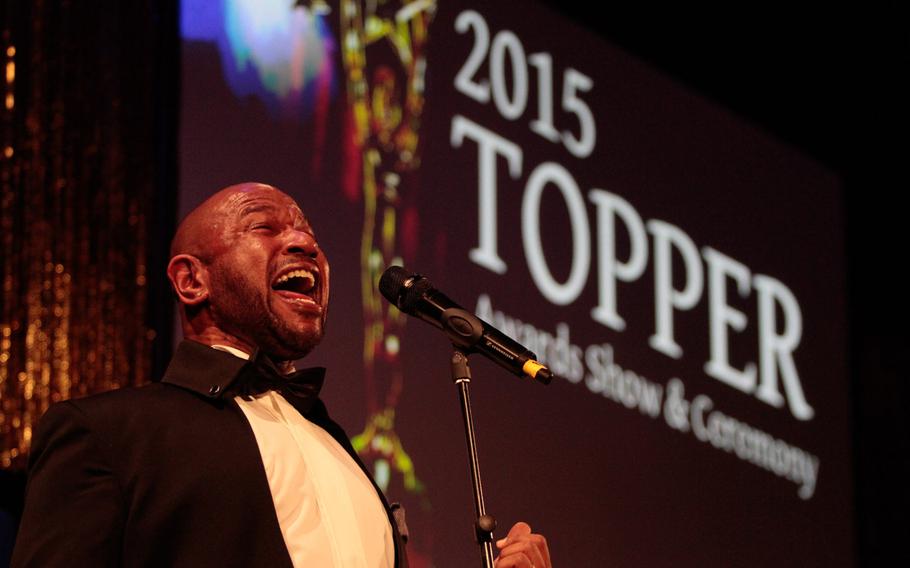 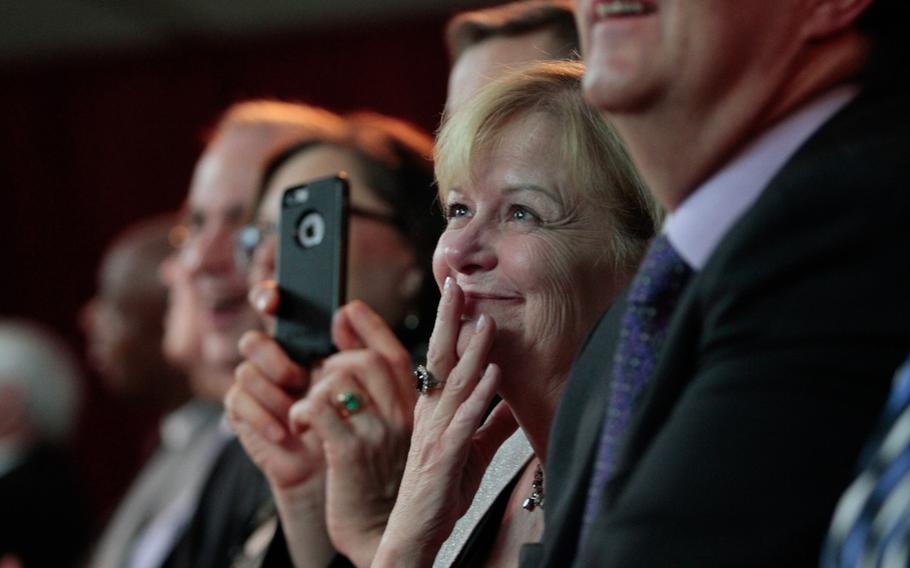 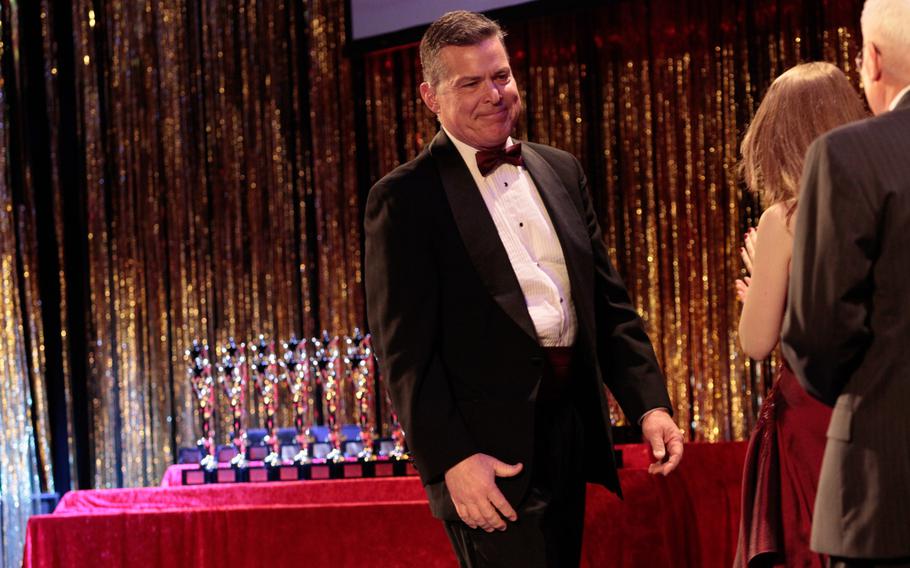 Buy Photo
Gordon Smith walks on stage to accept his award for best debut performance in a play Saturday, April 25, 2015, for his role as Juror 6 in Baumholder Hilltop Theather's production of ''12 Angry Men.'' (Matt Millham/Stars and Stripes) 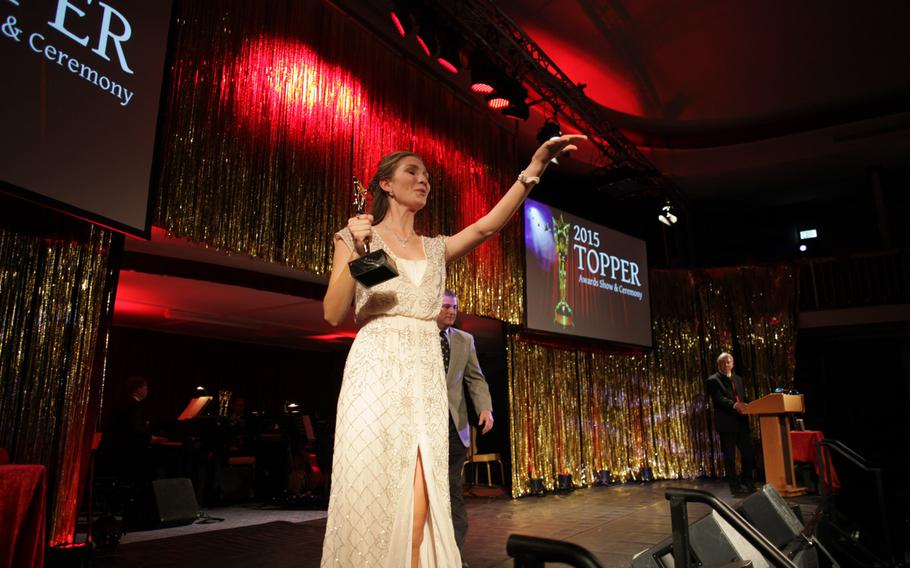 Buy Photo
Audrey Daly waves to her supporters after picking up her Topper award for best supporting actress in a play Saturday, April 25, 2015, for her portrayal of Helga in the KMC Onstage production of ''Kindertransport.'' (Matt Millham/Stars and Stripes) Buy Photo
Cheryl Navo walks off with her Topper award for best director of a play Saturday, April 25, 2015, for her work on ''12 Angry Men,'' produced by Baumholder's Hilltop Theater (Matt Millham/Stars and Stripes) 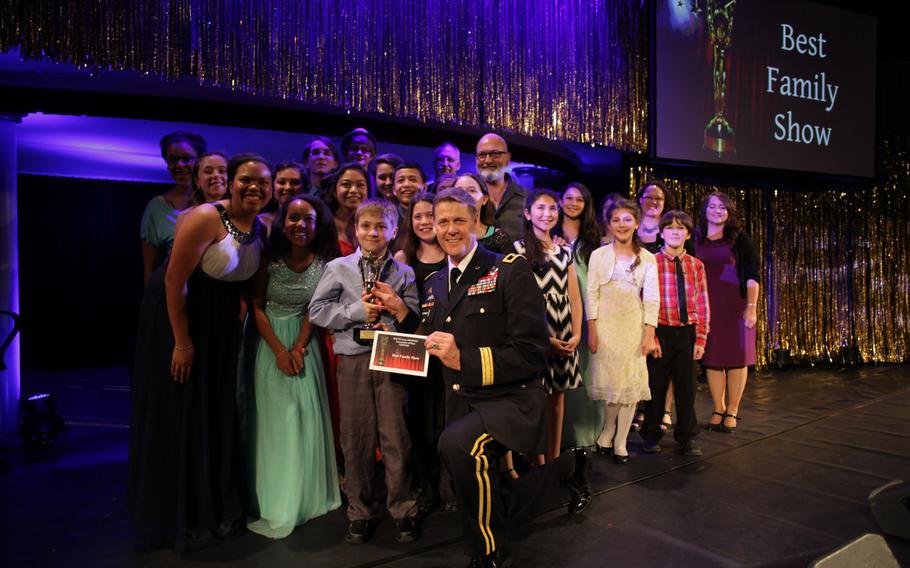 Buy Photo
Maj. Gen. John O'Connor, commander of the 21st Theater Sustainment Command, poses with the cast of ''Working,'' which won for best musical in U.S. Army Europe's 2015 Tournament of Plays. The show was produced by the Stuttgart Theatre Center. (Matt Millham/Stars and Stripes)

KAISERSLAUTERN, Germany — Sixteen-year-old Zachary Simmons made his mom cry when he climbed on stage Saturday night before a packed ballroom of men and women who think nothing of breaking into a song and dance routine.

Simmons did just that, while wearing donkey ears no less. He was accompanied by John Manning, who sported a short green ears of his own, during the 2015 Installation Management Command Europe Tournament of Plays.

Simmons and Manning drew both laughter and applause for their spirited “Travelling Song” rendition from SHAPE Players’ production of “Shrek Jr.”

“I couldn’t think,” Simmons said, of the moment his name was called and he took to the stage a second time to get his prize. “I was really surprised and happy.”

Vogelweh’s Armstrong’s Club was the scene of the annual Topper Awards’ show and ceremony, the Army in Europe’s version of Broadway’s glitzy Tony Awards. The event highlights the vibrant theater communities active at military bases throughout Europe, recognizing the dedicated group of mostly volunteer troops, civilians and family members who devote long hours to their craft.

In between award presentations, the hundreds in the audience got a taste of the talent in their midst, with a sampling of live performances from many of the 11 theater communities.

“I’m sure you’ll agree the arts are hardly competitive,” Michael Formica, IMCOM-Europe region director, quipped, provoking a chorus of nervous laughter from the crowd at the show’s start.

The 200 nominees were revealed only moments before each award presentation, with names often drawing gasps of excitement. Loud applause erupted when the winner was announced, at times drowning out the presenter. To the delight and surprise of the audience, guest announcers included the likes of Daniel Radcliffe, William Shatner and Jake Gyllenhaal and other big-name stars who read winners names and shared a few words via a recorded video message played on two large stage screens.

One can’t help but want a Topper, said Tonya Holloway, a stay-at-home mom and writer from Stuttgart. “You’re happy for other recipients but in the back of your mind, you’re thinking … ‘I hope I get my name called.’ ”

Holloway got her wish: She won for best original music in a play – along with Christopher Mazen - for writing lyrics for “Her Stories,” a play adapted from a Virginia Hamilton children’s book.

Seventy-one military members took part in the 15 shows up for consideration.

Airman 1st Class Tate Pollock was hoping to nab a Topper for playing the title role in the Baumholder Hilltop Theater’s production of Willy Wonka.

Being in theater is like “having a second family,” he said. “It truly is a family when you’re together.”

For Pollock, theater is literally a family affair. He met his wife, Oscar, when trying out for his first military production, Cinderella, in 2013.

The recent birth of their child has curtailed their stage time some, but they’re finding ways to stay involved.

“We have a lot of theater friends who are able to watch the little one while we’re on stage,” Pollock said.

Air Force civilian Chris Senkbeil and his wife took home several Toppers for their behind-the-scenes work on Ramstein’s Razz-Ma-Tazz’s production of Hansel and Gretel, including one they have to share – along with Karin Asselstine – for best scenic artistry.

Designing the fairy-tale –like scape for the play involved well over a 100 hours, he guessed; with mostly children in the cast, the set design labor fell to only a few adults, he said.

The hard work makes the recognition at Toppers extra special, he said. “It’s an absolute joy.”

The joy was spread around. The cast of Baumholder’s “12 Angry Men” was all smiles when bounding to the stage to collect “best play” statuettes.

Lois Borsay, a school nurse at Vogelweh Elementary School, also won best featured actress for her role as Juror No. 9 in the play. “I’ve been nominated a few times before but this is my first win, so it’s really sweet,” she said.

Perhaps no one had more fun than the show’s piano player, Alan Buxkemper, the lively entertainment branch director for the Stuttgart theater, one of a few paid positions in Army Europe’s entertainment program. At one point, he stood to accept one of several Toppers earned on the night while continuing to drum out notes with his other hand.

“I came over here to study music with my wife and it just ended up in this entertainment,” he said afterwards. “It’s been so rewarding, we haven’t left. I don’t like to say it but I know a lot of musicians who are selling insurance.”